From Kung Fu to Kabbalah ... to Messiah

As in the ancient days of the Pharaoh, my mother's family was forced to flee from Egypt in 1952, a time when Jews were hated and feared there as Israel's statehood became a fact. The "promised land" to our family was Paris, France. There my mother, a beautifully exotic woman with green eyes, olive skin and long dark hair, met and married my father, a French Jew descended from Lithuania. I was born in 1966.

My mother came from a unique sect known as Karaite Jews—unique because they do not revere the Talmud (a set of ancient rabbinical commentaries) as given by God. Karaites only accept the religious authority of the Tanach (Old Testament), and are therefore often ostracized by the larger Jewish community. Ironically, while my mother took pride that her religion was not "tainted" by the Talmud, she did not regard the Bible as God's revelation either. For her, being a Karaite was mainly a cultural distinction.

My parents divorced when I was two, leaving my brother and me in our mother's care. Mom's brother lived in San Francisco, and it seemed to her like a good place to start a new life.

It took some courage for her to come to a new country with a toddler and a ten month old to support. Though English was her third language, Mom was able to work at a retail job—scrimping to put my brother and me in day care until my grandmother came from Paris to help.

My grandmother pretty much took over the family. We lived in her house, where she was queen. A perfectionist with a heart of gold, she was always giving to others—but left no doubt as to who was in charge.

Before long, other relatives moved to San Francisco, drawn to the U.S. by the promise of a better life. A minority within a minority, Karaites stick together. My grandmother hosted wonderful Passover seders and other holiday events at her house in the Marina, a great neighborhood that provided a fun and safe place to grow up.

Being a Jew was a mystery to me. I didn't understand what made us different—and I didn't especially like feeling set apart. Yet whenever I tried to fit in more with my non-Jewish friends, I felt like a fraud. 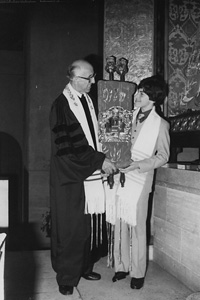 I knew God was real, but wondered why I didn't sense his presence, even in our synagogue. My mother sent my brother and me to a Reform synagogue to prepare to become bar mitzvah. For many (including me) the big event signals not only the end of childhood, but the end of Hebrew school and of any regular synagogue attendance. While I still had some reverence for the Scriptures, by the time I was thirteen I was preoccupied with the same things that fascinated most boys my age: girls.

My sense that God was distant and unknowable governed my life throughout high school and college. I decided that I might as well do whatever I wanted. Thus began an unrestrained life of sex, drugs and partying.

After high school, I headed for the University of California at Santa Barbara, where I studied painting, art and film. I continued my hedonistic lifestyle, but it was not exactly fulfilling ... and I had begun to wonder about the meaning of life.

Eastern philosophies and religions were exotic and promised inner peace, so I practiced Kung Fu, meditation and Japanese ink painting. I explored Zen Buddhism, Taoism and Confucianism, but none of these things satisfied my hunger for meaning and truth. I told myself that what I really needed was a "soul mate." I bounced from one relationship to the next, from heartbreak to heartbreak.

Meanwhile, Timothy Leary's vision of finding God through "mind-expanding" drugs appealed to me. I even explored Shamanism through Carlos Castaneda's books. Tapping into the spirit world sounded exciting, but taking peyote only made me sick.

During my senior year, I began to explore Jewish mysticism. Learning about Jews like Nachman of Braslav who yearned to know God was refreshing. Excited about this new world of soul-searching Jews, I applied and was accepted to participate in Nesiya, an art program in Israel that encourages young people to explore Judaism while deepening their relationship with the Jewish people and the Land of Israel.

I found out that the Jerusalem yeshivas (Jewish schools of higher learning) offered free classes for seeking Jews like me. The classes included free food and housing as long as I kept a kippah (skull cap) on my head. I decided to extend my stay in Israel to study.

That summer I came to believe that the Bible is true and that through it, we can know God and what he expects from us. This launched me headfirst into religious Judaism and a life of attempting strict adherence to God's law. Yet I began to see hypocrisy even among the most devout, and I decided to return to San Francisco.

I arrived for my final semester of college at UC Santa Barbara, still determined to live an Orthodox lifestyle. But I was not especially tactful. I told my uncle that according to the Orthodox rabbis, his sons weren't Jewish because their mother was a gentile. He nearly killed me! Then, at a party my grandmother hosted, I reminded all of our guests that the fresh shrimp they were chomping down was not kosher. My mother yelled at me and called me a fanatic.

Yet I was far from consistent in my new lifestyle; when it came to women, I was as hedonistic as ever. I sincerely tried to follow God's law under the tutelage of an Orthodox rabbi who was also into Kabbalah (Jewish mysticism). However, as time went by, I became increasingly impatient with God and tried to "help" him give me more revelations as I dabbled in astrology, numerology, Tarot cards, psychics, drugs and New Age books. I knew that the Bible forbade these things, and the more I learned about God's holy law, the more I realized that I was consistently breaking it. In fact, I even ended up in jail for four days. There I saw written in big bold letters on the wall next to my bed: JESUS.

I had been curious about Jesus for some time. My rabbi had told me that Jesus was a revolutionary. But when I began reading the New Testament, I saw that he was a Jew who seemed to have answers and someone I could relate to.

After graduation, a fine art collector sponsored me to paint for two years, so I was able to open a studio as a professional artist in Emeryville, California. I painted dozens of canvases and had shows in several art galleries.

By 1993 my sponsorship had run its course and my art career was over; I had no other job and no money saved. I found myself back in San Francisco living with my grandmother and working at a café for $6 an hour. 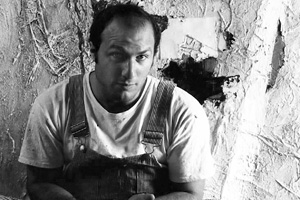 Then I met one of my brother's housemates. I was struck by her close relationship with "my God" (the God of Israel). I flipped through her big Bible and was surprised that she had highlighted many passages in the Hebrew Scriptures. I was as jealous as I was intrigued. I didn't know the Jewish Bible or the God of Israel the way that this gentile woman did. We talked all afternoon, and the holiness and peace that emanated from her amazed me.

A month later she sent me a five-page letter and a huge box full of books about Jesus. Then one night I had a dream in which I saw an awesome, glorious man who seemed to be glowing. He held an ancient-looking parchment in his extended hand, and on that parchment were the words, "IT'S TIME TO COME HOME." I awoke immediately knowing in my heart that something wonderful was about to happen.

A couple of days later, I picked up one of the books this Christian woman had sent me: Evidence that Demands a Verdict, by Josh McDowell. It talked about the reliability of the Bible and detailed how Jesus fulfilled Messianic prophecy from the Hebrew Scriptures

Suddenly everything began making sense. It now seemed so obvious that Jesus was our own long-lost Messiah, and I wondered why we didn't know this after 2,000 years. I compared the Scripture references in the book to my Jewish Bible to make sure I wasn't being duped. When it all checked out, I wondered, what now?

I knew that I was a sinner and a hypocrite separated from God, and I was desperate to know him. McDowell's book described God's plan for reconciliation with sinful human beings, from the book of Leviticus (in the Torah): "For the life of a creature is in the blood, and I have given it to you to make atonement for yourselves on the altar; it is the blood that makes atonement for one's life" (Leviticus 17:11).

Through this book and through the Scriptures, I realized that those animal sacrifices were no longer necessary; they had merely been pointers to something far more profound. Jesus the Messiah came as God in the flesh to live the perfect life that none of us could live, then he gave himself, allowing his blood to be shed, as the perfect sacrifice for all people. He rose from the dead as proof that those who believe in him would be born again spiritually and reconciled with God.

That afternoon, alone in my grandmother's kitchen, I called out to Jesus the Messiah for forgiveness and received him as my Lord. Immediately, I felt the awesome love of God surround me and lift the heavy, sticky load of darkness off of my shoulders. Finally! After all those years, I knew that I had been forgiven of all my sins and reconciled to God. I was a brand new person, free from guilt and shame. I no longer had to wonder where God was, or how I could sense his presence.

I stopped swearing, gossiping and lying. I stopped seeing psychics, stopped taking drugs and ended my pattern of immorality. Jesus turned my anxiety and fear into peace and love. Finally, by God's grace, I'm becoming the kind of Jew God wanted me to be all along—one who can point people to the living God of Israel who transforms broken lives into whole ones.

Cyril lives in southern California with his wife, Rhonda—also a Jewish believer in Jesus—and their three children, Gabriella, Daniel and Yossi.

This article is excerpted from the Gordons' booklet, Matched by Messiah: Jewish Soul Mates for Jesus. If you are not yet a believer in Jesus but want to know more, order their book.

If you don't see an email from us in the next few weeks, please check your spam or junk folder in your email account to make sure our messages have not been filtered.