A fresh look at astronomy sets Jesus’ birthdate at an important time in the Jewish calendar. 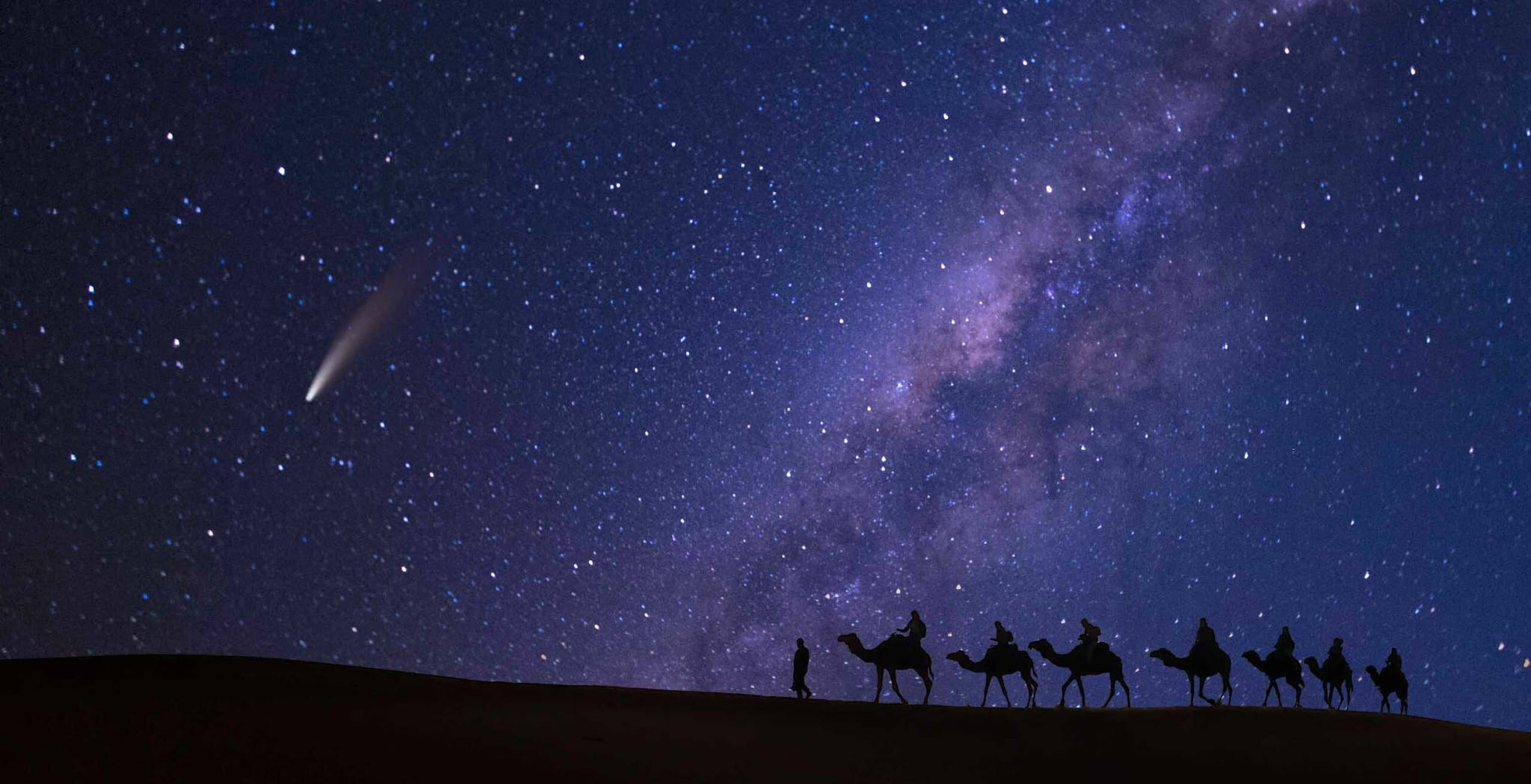 Christmas can make me grumpy. And not in a “Bah! Humbug!” way. Why? Because the most anticipated event in Jewish history – the coming of the Messiah – has been hijacked and distorted beyond recognition.

I’m Jewish and I follow Yeshua (Jesus), but I’ve had a long-standing conflict with Christmas. It may not sound like it, but I’m actually all about the warm, fuzzy feelings associated with the season – twinkling lights, mugs of hot chocolate, cozy snowscapes, and festive music. Last year, I even tried my hand at making wassail.

Like many Jewish Americans, I grew up with some Christmas traditions. But as I grew older, I felt less warm and fuzzy and more and more unsettled about this day.

What we see today is simply a syncretic, hybrid holiday.

People loved to tell me that “Jesus is the reason for the season” – but I knew it wasn’t that simple. Long before his birth, this time of year was filled with many similar traditions—except they were in celebration of a Roman winter solstice festival called Saturnalia. What we see today is simply a syncretic, hybrid holiday initiated in the fourth century. This year, I couldn’t take it anymore. I had to find out when Yeshua was actually born and maybe find a new tradition worth celebrating in the process.

Where the Date of December 25 Came From

Early traditions claim that Yeshua was born in the spring. The oldest written records say he was born “a hundred and ninety-four years, one month, thirteen days” before the death of Commodus, which would work out to November 18.1 Some historians, in what is likely a massive misunderstanding of a Jewish tradition, insisted it was December 25 because our sages believed that tzaddikim (righteous men) died on their birthdates.2 Somehow, the Christian interpretation assumed the tradition was that great men died on their conception dates. According to their logic, if Yeshua died on March 25, as many believed, then that was his conception date, and therefore, he would have been born a full nine months later on December 25 (because pregnancies are always perfectly on time, apparently).

Googling Jesus’ birth date was a good start, but it also made me realize these traditions are long-outdated assumptions. If I was going to find the actual date of Yeshua’s birth, I’d need more scientific evidence. Then I had a realization: the magi had followed a star from the East to find the newborn Messiah,3 and if the appearance of that particular star could be tracked down to a time frame, then ascertaining the birth date of Yeshua might be possible.

Jewish References to the Messiah’s Star

As it turns out, the “Christmas Star” is the most Jewish thing ever. For millennia, the coming Messiah has been associated with the appearance of a star:

I see him, but not now; I behold him, but not near: a star shall come out of Jacob, and a scepter shall rise out of Israel. (Numbers 24:17)

These are the words prophesied over Israel by the pagan sorcerer, Balaam, while we were encamped in the wilderness. It was after this event that our sages began anticipating that the Messiah’s coming would be heralded by a star.4 In fact, Rabbi Akiva gave the name “Bar Kochba” to a rebel military leader named Shimon ben Kosiba, and then proclaimed him to be the Messiah. “It was Rabbi Akiva who ascribed to Shimon bar Kochba the famous messianic verse: ‘A star will shoot forth from Jacob.’ …   That is how he got the name ‘Kochba,’ which means ‘star.’”5

The star is the Interpreter of the Law.

These expectations were even etched into the Dead Sea Scrolls: “The star is the Interpreter of the Law … as it is written, ‘A star has left Jacob, a staff has risen from Israel.’”6 Similar sentiments are also recorded by Philo,7 the Peshitta, Targums Neofiti, Onkelos, Pseudo-Jonathan, and the Fragmentary Targum, as well as the testimonies of both Judah and Levi in The Testament of the Twelve Patriarchs.8

Perhaps the most fascinating reference to this phenomenon is in the post-rabbinic midrash Aggadat HaMashiach:

It is taught in the name of our Sages [that]… a star will emerge in the east. This is the star of the Messiah….

This source also contains one of the most compelling descriptions regarding this coming Star:

A star shall appear from the east and on top of it a rod of fire like a spear. The Gentile nations will claim “this star is ours,” but it is not so; rather, it pertains to Israel, as Scripture forecasts: “a star shall step forth from Jacob…” 9 10

Okay, so the prophesied star was well known, referenced by Jewish sources throughout history, and connected to the Jewish Messiah. But was there any scientific data to prove such a star actually appeared within the timeframe Yeshua was born? That’s what I needed to know.

I returned to my digging and stumbled upon a video of Dr. Colin Nicholl introducing his research at Oxford University. I thought I was doing a lot of research, but Dr. Nicholl is a theologian who dedicated a decade of his life to studying astronomy so he could find out the truth behind the star. After reading his book, I came to find that he believes that the star which led the magi to Bethlehem was a comet (based on the biblical description of the “star”). I felt that his idea seemed to be in keeping with the rabbis’ descriptions of the messianic star having a “rod like a spear.” He claims that the comet appeared within the historically documented event of the constellation of Virgo aligning with the sun and moon on September 15, 6 BC (1 Tishrei 3756). He calculates that Jesus was born as this comet was being “birthed” from Virgo on October 20, 6 BC (5/6 Heshvan 3756).11 Nicholl was also kind enough to respond to a lengthy email I wrote him after finishing his book. I had plenty of questions, especially after reading other theories on the subject.

All biblical scholars agree that Herod was alive and the reigning monarch at the time of Jesus’ birth.

In the midst of my research, I also read Reversing Hermon by Dr. Michael Heiser. In chapter 4, Heiser puts forth his theory about the Bethlehem star. He believes that the star was the conjunction of the planet Jupiter and the star Regulus, a series of conjunctions which occurred in 3 BC, one of them being on September 11, 3 BC (1 Tishrei 3759). Heiser believes that this is Yeshua’s true birthdate.12 This view is based on his use of astronomical software and his calculation dating the death of King Herod to 1 BCE as opposed to 4 BCE, thereby opposing the predominant stance of modern scholarship. Although they don’t agree on the date of his death, all biblical scholars agree that Herod was alive and the reigning monarch at the time of Jesus’ birth.

While both of these scholars present intriguing research, their theories are unpersuasive unless you know another piece of the puzzle: the sign of Virgo.

In Revelation 12, what the author John describes is considered by a number of Bible theologians to be a description of the heavens when Messiah was born:

And a great sign appeared in heaven: a woman clothed with the sun, with the moon under her feet, and on her head a crown of twelve stars. She was pregnant and was crying out in birth pains and the agony of giving birth. (Revelation 12:1–2)

This is not just obscure symbolism, but an arrangement in the constellations that actually occurred – twice, in fact, within the years 7–1 BC – the timeframe in which the historical person Yeshua was born. The “woman” John is referring to is the constellation Virgo. As meteorologist and Bible researcher Ernest Martin writes, “The word ‘sign’ used by the author of the Book of Revelation to describe this celestial display was the same one used by the ancients to denote the zodiacal constellations.”13

Martin dated the phenomenon to September 11, 3 BC (1 Tishrei 3759) based on his astronomical software calculations. The program indeed proved that on that date, the sun appeared in Virgo’s center, clothing her, with the moon under her feet. “In the year 3 B.C.E., these two factors came to precise agreement for about an hour and a half… in the twilight period of September 11th the relationship began about 6:15 p.m. (sunset), and lasted until around 7:45 p.m. (moonset). This is the only day in the whole year that the astronomical phenomenon described in the twelfth chapter of Revelation could take place.”14

Heiser and Martin are in agreement on the date of September 11, 3 BC. However, Dr. Nicholl is very persuasive that Herod died in 4 BC, and that the most updated astronomy software proves that in the timeframe of 7–1 BC (the only probable years for Yeshua’s birth), “Revelation 12:1 is only compatible with September 15, 6 BCE.”15 He claims that in 3 BC, the moon was not precisely under Virgo’s feet, and only in 6 BC did the correct positioning occur.

The arrival of the Messiah occurred on Rosh Hashanah.

Two theories, both based on astronomy and history, date Jesus’ birth a few years apart, but only a few weeks apart on the calendar year. Yet what stood out to me, is that both Martin and Nicholl agree that the constellatory sign heralding the arrival of the Messiah occurred on Rosh Hashanah.

I wasn’t able to figure out the exact day Yeshua was born. There is still some element of mystery about the Messiah’s birth, and maybe that’s how it should be.

Here’s what I do know: Yeshua was born to Jewish parents in the town of Bethlehem. He was born in the autumn during the High Holiday season, and his coming was announced in the sky on Rosh Hashanah.

This was a historical event, not a myth, and it didn’t take place in a quaint nativity scene nestled under twinkling lights on someone’s front lawn. Dean Martin wasn’t singing “Let It Snow!” on the radio. It was likely a warm night in central Israel. A teenage Jewish girl went into labor amongst farm animals, and perhaps somewhere in the village a shofar sounded to herald the coming king under the new moon which had appeared at Virgo’s feet.

This was finally the missing piece I was looking for. In Jewish tradition, the entire month of Elul, leading up to Rosh Hashanah, anticipates God’s presence coming among us. It is a time of reflection and repentance.16 We certainly have enough tradition at Rosh Hashanah to commemorate Yeshua’s birth. We anticipate blowing the shofar when Messiah comes17 and at the resurrection of the dead.18 19 In the same way, as the shofar resounded underneath Virgo in Bethlehem on that Rosh Hashanah so long ago, it will resound again when Messiah returns on the clouds of heaven: “For the trumpet will sound, and the dead will be raised imperishable, and we shall be changed” (1 Corinthians 15:52). The Hasidic rabbis teach that the cry of a shofar has a certain sound “akin to the wail of a child, yearning to be reunited with a beloved parent. There are no words to express a longing that is so deep, so primal and so true.”20

He lived, he still lives, and he is returning.

May that desire be reawakened in us all this December 25 or whenever we see Messiah’s star in a frosted storefront window, on the form of a sprinkled sugar cookie, or dangling over a nativity scene. It appeared to bring hope to the Jewish people, and it remains to do the same. He lived, he still lives, and he is returning.

1. Clement of Alexandria, “The Jewish Institutions and Laws of Far Higher Antiquity Than the Philosophy of the Greeks,” chap. 21 in Stromata.

4.Balaam and Balak: The Full Story.

13.The Time of Jesus’ Birth

19.The Great Shofar and Rosh HaShanah.

Jesus and the Canaanite Woman