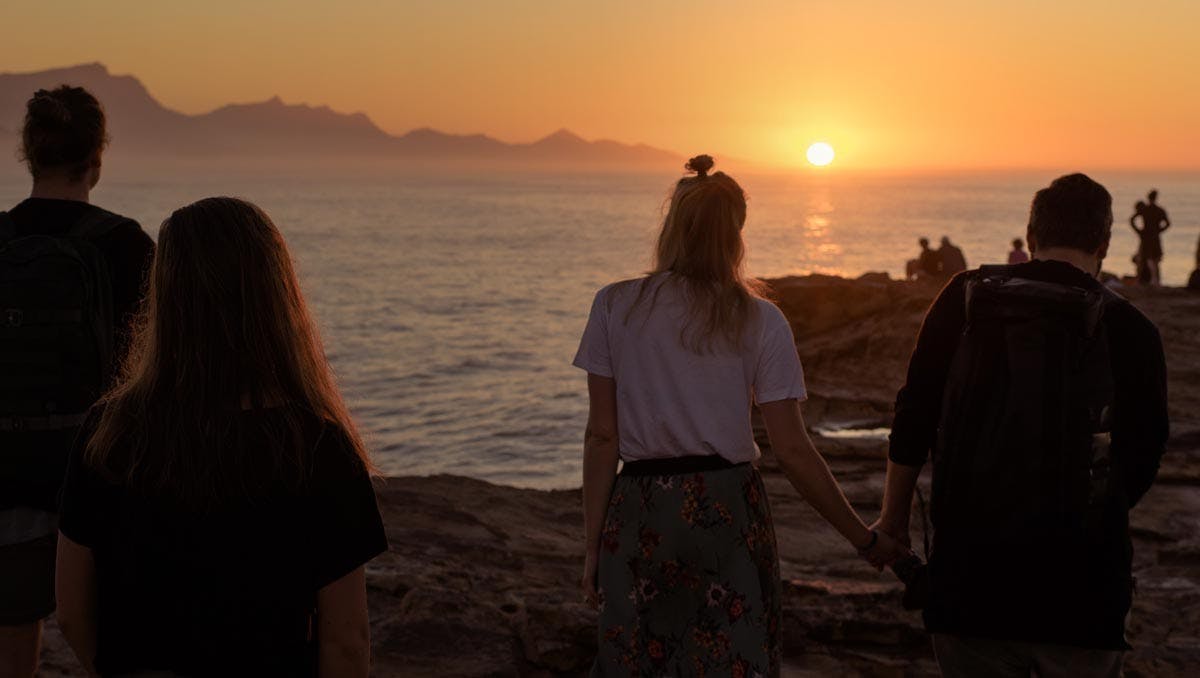 Two new moons had passed since we crossed the Red Sea. We’d been on an arduous trek through the desert, but we finally approached the intimidating slopes of Sinai, not sure of what to expect. Suddenly, the mountain was wrapped in a thick curtain of smoke that descended upon the precipice of the towering peak. We trembled as we prepared to meet the God who had rescued us from Egypt only weeks before. As He spoke, the immortal words of Torah cascaded down the mountain and rumbled through our camp.

God’s words that day reflected His love and commitment to Israel. But they also carried His desire for all people of the earth to know Him. The Hebrew text says that we saw the voice of God that day.1 Rabbis interpret this visual manifestation as God’s words dividing into 70 languages in visible flames of fire, so all the nations could understand His instructions (Shemot Rabbah 5:9).

God wanted His chosen nation to know Him personally and bring other nations to Him.

The point of this first Shavuot is that God wanted His chosen nation to know Him personally and to bring all the other nations into relationship with Him. But none of the other nations were there that day. How were they meant to hear God’s invitation to come and worship Him?

Many nations shall come, and say: “Come, let us go up to the mountain of the LORD, to the house of the God of Jacob, that he may teach us his ways and that we may walk in his paths.” For out of Zion shall go forth the law, and the word of the LORD from Jerusalem. – Micah 4:2

Scripture says that the word of the Lord is meant to go out from Jerusalem (Micah 4:2), no doubt with the intention that other nations would hear about the God of Israel. However, most Jewish people do not pursue others to join Judaism.2 As Eli Rubenstein elaborates, “One doesn’t need to be an observant Jew, just a good person. That’s why we don’t proselytize.”3 And yet, the purpose of God’s gift of the Torah was to activate us to be who we were meant to be: a light to the nations.

For thousands of years, strategies were drawn to attract both Gentiles and unaffiliated Jewish people to the practice of Judaism.4 Why? Because foundational Judaism recognized that God’s plan in calling Israel out from the nations was for us to reflect His holiness5 and bring the rest of humanity into relationship with Him.6 7

This is reflected clearly in the Hebrew Scriptures. We’ve welcomed non-Jews into the fold numerous times, from the Egyptians who stood with us at Sinai on that first Shavuot to Rahab and to Ruth. Even before Sinai, Jewish tradition says that Abraham broke the idols of his relatives and friends in Ur and taught them to follow only one God.8 Our prophets decried idolatry not just within Israel, but among the surrounding nations and welcomed those who repented.9 The story of Jonah demonstrates this in detail (Jonah 1:1–2). While in exile, Daniel preached the sovereignty of the God of Israel to the kings and princes of Babylon.10 The prophet Zechariah declared that one day all the nations will worship God in Jerusalem (Zechariah 14:9, 16–18).

But if we as Jewish people keep our relationship with God to ourselves, what will bring this about? More than one thousand years after Sinai, on the very same day of Shavuot, the followers of a young rabbi named Yeshua were gathered together in Jerusalem, likely in the Temple.11 Eyewitnesses reported that a sound like a rushing wind filled the space around them and flames of fire settled over them. Suddenly, they were given the ability to speak in other languages. The Jewish people who were there from all over the world were able to understand them.

The nations were reconciled to the Creator through the Jewish Messiah and the Jewish people.

They were astounded as they heard “the mighty works of God” declared, and over three thousand of those who witnessed this event came to believe Yeshua was the promised Messiah. It was these Jewish people who brought the message of repentance and reconciliation with God back to their homes in Mesopotamia, Asia, Egypt, Libya, and Rome (Acts 2:5–12, 41). Only now, could the mission of the Jewish nation be fully realized. When the Temple was destroyed, the word of the Lord could no longer go forth from Jerusalem. But after that miracle on Shavuot, the Gentile nations began to be reconciled to the Creator of the world through the Jewish Messiah and the Jewish people.

One of the young men who experienced this historic Shavuot later wrote, “That which was from the beginning, which we have heard, which we have seen with our own eyes, which we have gazed upon and touched with our own hands—this is the Word of life” (1 John 1:1). Starting at Mount Sinai, God has always revealed Himself and His word to us through our ears, eyes, hands, and hearts. Have you experienced Him?

1. “And all the people saw the voices and the torches, the sound of the shofar, and the smoking mountain, and the people saw and trembled; so they stood from afar” (Exodus 20:15 in Hebrew). The Hebrew word for “they saw” is ro’im (רֹאִים). Rashi writes, “They saw what was audible, which is impossible to see elsewhere…” and “Emanating from the mouth of the Almighty. Many voices, voices coming from every direction, and from the heavens, and from the earth.” Shemot – Exodus – Chapter 20.

4. Jonathan D. Brumberg-Kraus, “Were the Pharisees a Conversionist Sect? Table Fellowship as a Strategy of Conversion,” 2002.

The Book of Ruth: A Counter-Culture Love Story

Milk and Honey: The Sweetness of Knowing God