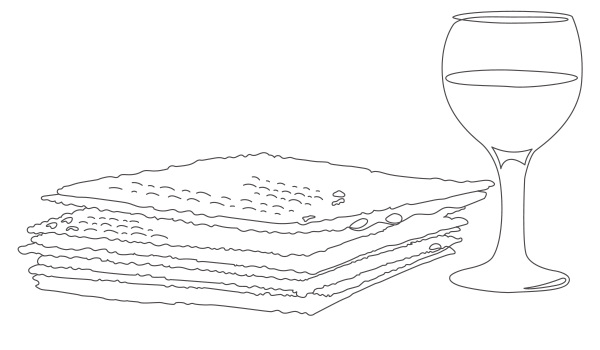 One of the most significant and popular Jewish holidays, Passover (Pesach) recalls and rejoices over the Israelites’ redemption from slavery in Egypt. Pesach takes place during Nisan, a Jewish month of joy (or at least a month in which some prohibit mourning)1 and one of the four traditional beginnings of the Jewish calendar year (Exodus 12:2: “This month shall be for you the beginning of months. It shall be the first month of the year for you.”). Pesach marks the beginning of our freedom and asks us to partake in the Jewish story of enslavement and redemption.

Ma Nishtana? Why is this night different from all other nights?

The Ma Nishtana, or “Four Questions,” lies at the heart of Pesach—an earnest plea to understand why we set this night apart from all other nights of the year. The story of the Israelite redemption from the yoke of slavery in Egypt helps us answer Ma Nishtana? “Why is this night different from all other nights?” Each year, we retell the Passover story to remember our ancestors’ redemption from Egypt.

The Israelites were strangers in a strange land (Exodus 2:22), but it hadn’t always been that way.

Jacob and his sons had gone to Egypt seeking relief after a famine in the land of Canaan (Genesis 47:4). There they became “as numerous as the stars of heaven” (Deuteronomy 10:22). Jacob’s son, Joseph, who had become chief counselor to the Pharaoh, brought prosperity to the Jewish people, but a new Pharaoh arose “who did not know Joseph” (Exodus 1:8). As the famine worsened in the region, the Egyptians soon found themselves rationing food and begrudging the Jews their share. The Egyptians, fearing a Jewish revolt, “treated us harshly and humiliated us and laid on us hard labor” (Deuteronomy 26:6). The Israelites lived this way for 430 years (Exodus 12:40).

God called Moses out of seclusion to lead his people to freedom. What happened after that is one of the foundational stories of our people. God sent Moses to tell Pharaoh to let the Israelites go, but Pharaoh was stubborn and hardened his heart, refusing to grant the Jews their freedom. Then followed the 10 plagues that we recall every Passover by dipping our fingertips in wine and dotting our plates with droplets for each plague, of which the last and greatest was the plague of the death of the firstborn.

Instead of visiting the plague on Jew and Egyptian alike, God told Moses how the Jews should stave off the tenth plague—by putting the blood of a lamb on their doorposts (Exodus 12:3-13). God set into motion a unique historical event and a memorial for future generations: the Passover.

Christ in the Passover

Ridding the Home of Leaven

While the Passover sacrifice is no longer made, we still rid our homes of leaven each year to remember how we fled Egypt in haste (Exodus 12:14-17).

The removal of leaven consists of three parts: Bedikat Chametz, the search for chametz, or “leaven”; Bittul Chametz, the nullification of any claims to ownership of chametz through a declaration made in Aramaic; and Biur Chametz, the destruction of the chametz. After we have removed all chametz from the household and said Bittul, we burn the leaven or otherwise destroy it, thus completing Biur Chametz.

Many Jewish families have turned this process into a full-fledged spring cleaning as they hunt for the leaven—some even cover their kitchens in aluminium foil or plastic or have separate kitchenware altogether!

Many biblical authors use leaven as a symbol for sin. The apostle Paul says, “Cleanse out the old leaven that you may be a new lump, as you really are unleavened. For Christ, our Passover lamb, has been sacrificed” (1 Corinthians 5:7). Removing leaven from the home becomes a symbol for removing sin from our lives. This takes on a new meaning in light of Messiah’s sacrifice.

The Seder: The Heart of Pesach

God commanded the annual reenactment of the first Passover night as a physical and tangible reminder to all generations of His salvific power. The Seder is a ceremony that would appeal through the senses to each person of every generation.2 Seder means “order,” a fitting term for the elaborate series of traditional rituals in a specific order.

Everybody gathers around the table, reclining on pillows to imitate the attitude of free Romans. The leader of the Passover, often dressed in a kittel, or “white robe,” guides everybody through the Seder using the book known as the haggadah (lit. “telling” or “showing forth”), a book of readings, questions, fragments of stories, and blessings that are ancient in origin. When we follow the haggadah and perform the Seder, we share in a ceremony that binds us to our fellow Jews across time and place. Here is the typical order of the Seder:

For the next seven days after the Seder, we refrain from eating leaven.

In Exodus, the first and seventh days of the Passover are given special status: “On the first day you shall hold a holy assembly, and on the seventh day a holy assembly. No work shall be done on those days” (Exodus 12:16). However, as is the custom on other holidays, Jews in the Diaspora celebrate the “holy assemblies” twice. Doubling up on holidays is a rabbinical hedge for Jews outside of Israel, so that they don’t accidentally miss the holiday on whatever date it falls in Israel.

Thus, Diasporic Jews have Seders on the first two nights of Passover (Nisan 15-16), observe four Chol HaMoed (“intermediate day”), and celebrate two conclusory days of rest (Nisan 21-22). Jews in Israel have one Seder (Nisan 15), observe five Chol HaMoed, and only celebrate one final day of rest (Nisan 21). (A Chol HaMoed is an intervening or intermediate day of Passover on which work may be done but the prohibition against leaven still applies.)

Below are the Biblical readings for Pesach, taken from the Five Books of Moses and the books of the prophets:

The story of Passover is a story of “we.” The Mishnah records the saying of Rabbi Gamaliel: “In every generation a man is bound to regard himself as though he personally had gone forth from Egypt” (Mishnah 116b). We must not take for granted the great freedom we enjoy today, so on Passover we remember our ancestors and thank God for liberating us.

The traditional haggadah tells us of four archetypal sons (“Arba Banim”): ”a wise son, a wicked son, a simpleton and one who does not know how to ask.”5 The wicked son distances himself from the history of his people with the word “you.” He thinks the ceremony is irrelevant. He estranges himself from his history, thus estranging himself from his community and from God.

Though we would not proclaim ourselves to be “wise,” Messianic Jews, like the wise son, join our people in seeing the Exodus as what God has done for “us.” We also believe that the Exodus at the first Passover points us to an even greater redemption in Yeshua. This leads us to the way the New Testament speaks about Passover and redemption.

Pesach in the New Testament

The Gospel accounts of Jesus’ Last Supper closely align with the traditional Passover celebration. Though the Seder as we know it today didn’t develop until sometime after the first century, the Last Supper “should be viewed as a primitive primitive Seder.”6

In the Gospel of Luke we read:

Then came the day of Unleavened Bread, on which the Passover lamb had to be sacrificed. So Jesus sent Peter and John, saying, “Go and prepare the Passover for us, that we may eat it.” (Luke 22:7-8)

When the hour came, he reclined at [the] table, and the apostles with him. And he said to them, “I have earnestly desired to eat this Passover with you before I suffer. For I tell you I will not eat it until it is fulfilled in the kingdom of God.” And he took a cup, and when he had given thanks he said, “Take this, and divide it among yourselves. For I tell you that from now on I will not drink of the fruit of the vine until the kingdom of God comes.” And he took bread, and when he had given thanks, he broke it and gave it to them, saying, “This is my body, which is given for you. Do this in remembrance of me.” And likewise the cup after they had eaten, saying, “This cup that is poured out for you is the new covenant in my blood.” (Luke 22:14-20)

The Gospel of John also suggests that the Last Supper put a unique twist on a longstanding Passover practice. In John’s account, we read that Yeshua washed the apostles’ feet before the Passover: “Then he poured water into a basin and began to wash the disciples’ feet and to wipe them with the towel that was wrapped around him” (John 13:5).

Jesus was staging a reversal of urchatz, when the leader of the Seder washes his hands to ritually purify himself before the meal. By washing the filthiest extremities of his disciples’ bodies, Yeshua was offering an object lesson in humility.

Although this first-century Seder diverges from modern practice in many respects, the wine, the bread, and the washing are all in keeping with the burgeoning development of Passover. Jesus and the apostles observed the Passover as it likely was practiced among first-century Jews, but his additional words and actions inspirited the Passover with his own life and the promise of salvation.

We would do well to remember:

The question of whether or not Jesus celebrated a Passover Seder as we now know it today is to some degree moot. He observed the Passover in the same way as any other first-century Jew. This event can draw Jews and Christians closer to one another rather than driving an additional wedge between our faith communities.

Perhaps the Last Supper … was used by Yeshua as the backdrop for his claim to be the fulfillment of the types and prophecies in the Hebrew Scriptures for a greater Lamb, a greater redemption from bondage (to sin), and a new perspective on salvation through his shed blood.7

As Messianic Jews, our Seders allow us to join with the historical and present experiences of our people as we recall God’s redemption from the slavery in Egypt. We also join with others who believe that Yeshua is our “Pesach sacrifice” who redeems us from slavery and sin. For what drove Pharaoh to enslave us was what drives every person when we do what is wrong or fail to do what is right: sin, the slavery within us. But there is a promise of redemption extended to those who trust in and follow Yeshua.

1. Encyclopedia Judaica, 2nd ed., s.v. “Nisan”: “The tabernacle was erected in Nisan (Exodus 40:17) and the princes brought their offerings then (Numbers 7:1-2). Because the 12 princes offered their gifts to the tabernacle every day beginning with the first of Nisan, each day was considered a festival. All public mourning is prohibited in Nisan … nor are eulogies allowed (Sh. Ar., OH 429:2). As ‘the greater part of the month was thus sanctified, the entire month is deemed holy’ (ibid., comm. Of Magen Avraham, 3).” Cf. Rosh Hashanah 11a: “On new year the bondage of our ancestors in Egypt ceased; in Nisan they were redeemed and in Nisan they will be redeemed in the time to come.”

4. Menachem Posner, “The Last Two Days of Passover In a Nutshell: What and How We Celebrate,” Chabad.org, accessed July 17, 2017, http://www.chabad.org/holidays/passover/pesach_cdo/aid/2748528/jewish/The-Last-Two-Days-of-Passover-In-a-Nutshell.htm.

7. Glaser and Bock, “Why Christians Can Celebrate Passover, Too.”