In ritual and tradition they differ, but in history and meaning they're deeply linked. 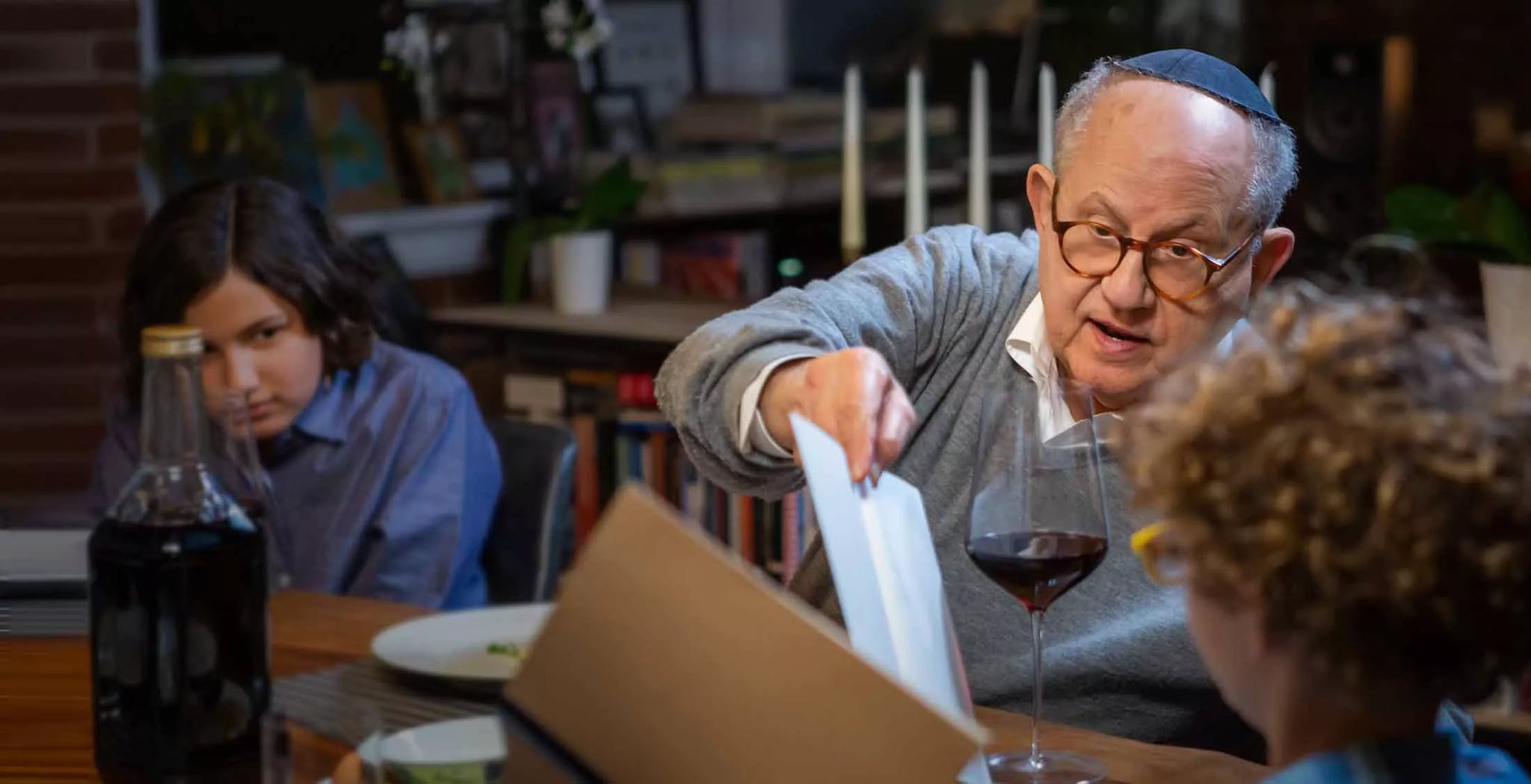 The first time I ever celebrated Easter was in high school with the family of my Gentile Christian boyfriend. It was a “through the looking glass” type of experience, and I don’t say that just because everything about it was so unfamiliar to me as a Jewish person—it also had to do with watching normally modest and reserved full-grown adults hunt for plastic eggs and gleefully unwrap chocolate bunnies and marshmallow chicks that struck me as something straight out of Alice in Wonderland.

Later that week, my boyfriend got to experience his own bewilderment as my family dipped our fingers into glasses of cloyingly sweet wine only to spill out 10 droplets each, all while shouting out Hebrew words in perfect unison. He found it all very intriguing and mystical … until the gefilte fish came out. That’s where we lost him.

The seasonal overlap between these two holidays is no accident.

1. The events that Easter celebrates took place in Israel during Passover.

The written accounts of Jesus’ life, known as the gospels, record that the events of the last week of His life all took place in connection with Passover. He came to Jerusalem that week in response to the command in the Torah to appear at the Temple in Jerusalem for the feast and celebrated Passover with his closest friends.1

The next day, as the Passover week continued, Jesus died. On the third day of Passover week, the eyewitness accounts from his followers claim that Jesus rose from the dead. This miraculous resurrection is what has been celebrated for thousands of years by Christians as the holiday of Easter.

2. Jesus celebrated Passover in Jerusalem with his Jewish family every year of his life.

The New Testament records this fact, as well as three to four of Jesus’ adult Passover celebrations with friends. As a devout Jew, Passover was an important part of the year for Jesus, and he prepared for its observance seriously.2 It’s no coincidence that many followers of Jesus today, including non-Jews from diverse cultural backgrounds, have a desire to observe Passover in some way to honor their spiritual leader’s example.

3. Passover is mentioned 28 times in the New Testament

It wasn’t just Jesus who celebrated Passover, it was all of his early followers as well. Paul, one of the first rabbinic scholars to become a follower of Jesus, taught extensively on the significance of Passover, referring to Jesus as “our Passover lamb,” and drawing out the connection between Jesus’ death and the sacrifice of the perfect, spotless Passover lambs each year.3

Easter wasn’t a thing yet, but Jesus followers did celebrate his resurrection each Sunday, because Jesus rose on the first day of the week.4 And that tradition continues in the church today.

4. In at least 15 languages, the word for Easter is derived from Pesach (Passover).

The Hebrew word for Passover is Pesach. In French, Easter is Paques. In Italian it’s Pasqua. In many other languages, the word for Easter is simply a transliteration of the Greek word for Easter, Pascha.5 Even the word in English comes from the very old English name for the month in which Passover falls.6

As Christianity spread beyond Israel and into many other regions, languages, and cultures, people embraced Jesus in ways that were culturally relevant to their context. But for several hundred years, the connection between Passover and the observance of Jesus’ death and resurrection at the time of Passover were linked by date and by language.

5. Antisemitism contributes to today’s separation of Passover and Easter.

If the early followers of Jesus were Jewish people who observed Passover while simultaneously commemorating the resurrection, how did Passover and Easter come to be so separated?

Until the 4th century, Easter’s dating was based on the Jewish calendar and date of Passover. But in the year 325 AD at the Council of Nicea, church leaders decided to create a way to date Easter that could be independent of Jewish influence.

Sadly, after this decision was made, many early church leaders increased in their contempt for the Jewish people. To this day, many Jewish people associate Easter not with fuzzy bunnies, but with horrific acts of antisemitism perpetrated in the days leading up to Easter by people claiming to be Christians and looking to punish Jews for “killing Christ.” This historical context explains modern Jewish concerns over antisemitic tropes within pop culture portrayals of Jesus’ death, like in Mel Gibson’s film The Passion of the Christ.

6. There is a surprising “lamb connection” between Jewish Passover and Christian Easter.

In Sephardic Jewish tradition, the afikomen—a fragment of the middle matzah—is understood as representing the Passover lamb. Before eating the afikomen all participants are required to say, “In remembrance of the lamb.” This is very much like what Jesus said when he held up a piece of unleavened matzah the night before his death and said, “This is my body given for you, do this in remembrance of me.”7

Jesus identified himself with the sacrificial lamb of Passover.

As the Jewish writers of the New Testament later elaborated on, Jesus identified himself with the sacrificial lamb of Passover. This not only explains why lamb is a traditional menu item at Easter, but the act of using bread to remember him this way is still performed by followers of Jesus across the globe in what is now typically known in Christianity as the communion service. Many church liturgies today even reference Passover directly every time this celebration is observed.

Our rabbis teach us that Passover wine should be red to remind us of the blood of the sacrificial Passover lamb. That brings insight into some of Jesus’ oft-misunderstood words at the last Passover seder he celebrated with his friends. Just before drinking the third of four cups of wine, (the Cup of Redemption), Jesus said, “This cup that is poured out for you is  the new covenant in my blood.”

Those words sound shocking to some, as if Jesus were advocating drinking human blood. This is particularly disturbing to Jewish people since during the Middle Ages we were accused of using human blood to make Passover matzah, an antisemitic lie known as a “blood libel.”8

However, when we understand that Jesus identified himself with the sacrificial Passover Lamb, it’s clear that he was using well-known Jewish tradition and applying it to himself.

These same words of Jesus are regularly recited in the Christian church during communion, which is often a key part of the sacred rituals leading up to Easter. In both ceremonies, red wine is used to represent blood that redeems humanity.

8. A season of cleansing sets the stage for both Passover and Easter celebrations.

Rabbi Evan writes for ReformJudaism.org, “Just as Lent prepares Christians for Easter, these actions prepare our bodies and souls to experience the Passover meal.”9 Some Christians will fast or even mark themselves with ash, a symbol of death, as a reminder of the need to reflect and repent before commemorating the resurrection of Jesus.

9. Both Passover and Easter celebrate freedom from slavery.

For Jewish people, the liberation from slavery in Egypt is one of the most central narratives of the Bible. At every Seder, the Passover symbols help to retell the story of God’s incredible victory over the gods of the Egyptians, achieving our freedom by His mighty hand and outstretched arm.

The New Testament explores a different type of slavery, a slavery to the curse of sin and death that humankind suffers under generation after generation.10 Jesus’ resurrection provided a victory over this curse, the promise of a future resurrection for his followers and the hope of freedom and renewal in this lifetime.11

10. Both Passover and Easter teach us that redemption must be personal.

Every Passover, the Haggadah instructs each of us from every generation to view ourselves as though we personally were rescued from Egypt, in reference to the verse, “You are to tell your son on that day saying, ‘It is because of what the LORD did for me when I came out of Egypt.’” The real power of the story of Passover is found not in a history lesson, but in a heartfelt recognition that it is because of God’s provision that each one of us lives not as a slave, but free.

Despite what some might think, going to church on Easter doesn’t make someone a Christian. An authentic Christian is someone who has embraced Jesus as their personal Messiah (translated Christos in Greek), their redeemer from spiritual slavery. It’s a personal belief in the resurrection of Jesus that leads to a personal experience with the power of that resurrection.

The origins of Easter are as far removed from tie-dyed eggs as the origins of Passover are from coconut macaroons. And although they are certainly two very different celebrations in many ways, Passover and Easter share not only themes and history, they share the same purpose in giving those who observe them a small taste of the sweetness of redemption.

5 The Profound Connection Between Easter and Passover

6 The source for this is the old English historian, Bede, who explained that the month was originally named for a deity—much like the currently used names for the months of March and April come from ancient Roman paganism.

9 How Lent Started With Passover

Jewish Views of the Resurrection