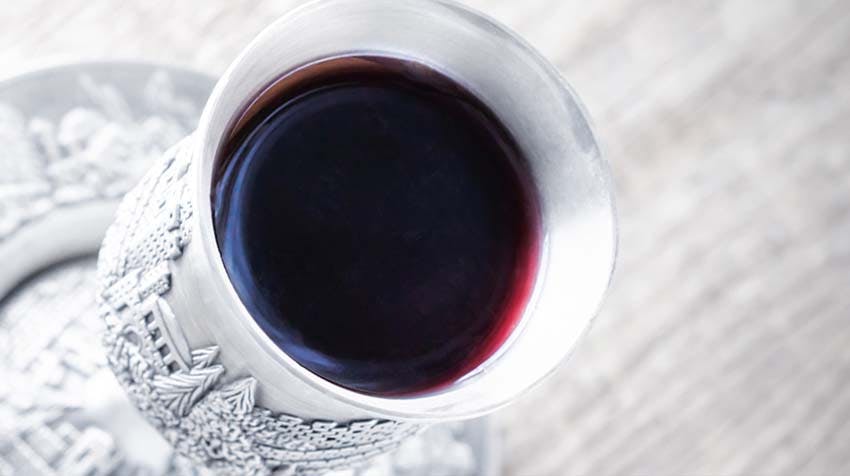 The Mystery of the Passover Cup

What does the Jewish Bible say about a Passover cup?

The Passover cup is one of the central symbols of this holiday known as the Feast of Redemption. Yet the original Passover story makes no mention whatsoever of a cup. In fact, the only biblical mention of a cup in connection with Passover is in the New Testament. When Jesus celebrated this feast with His disciples He raised a cup at least twice during the meal to make important statements about Himself (Luke 22:17, 20). What is the significance of the cup Jesus uses during His Passover observance?

Cup Symbolism in the Jewish Bible

Throughout the Hebrew Scriptures the cup is often used as a symbol of God’s judgment. For example, the cup of fury, the cup of judgment, the cup of trembling and the cup of horror and desolation appear throughout the Old Testament. Yet we also find the Psalmist crying out, “I will take up the cup of salvation, and call upon the name of the Lord” (Psalm 116:13). So the symbol of the cup carries with it pictures of both wrath and redemption, of judgment and blessing.

None of these references mentions the Passover. Yet, the themes of judgment and salvation are woven together beautifully in the Passover story. God poured out His judgment on the Egyptians, but spared the Israelites who obeyed Him by placing the blood of a lamb on the doorposts of their homes. Each year Jewish families retell these events through the seder, the ceremonial meal that commemorates Passover.

Not One Cup but Four

Yet, how the cup became a Passover symbol remains a mystery. We do know that by the time Jesus observed the Passover, drinking a cup during the meal was an official part of the observance. In fact, an ancient rabbinic source, the Mishnah, instructs those celebrating to drink from the cup four times during the Passover seder (Pesahim 10:1). That tradition remains to this day.

Each time the cup is filled, it has a different name. Opinions vary as to what certain cups actually symbolize. Most agree that the first cup is the Kiddush, which means sanctification. With this cup, we begin the Passover seder. The second cup is called the cup of plagues. The third cup is referred to as either the cup of redemption or the cup of blessing. The fourth cup is often called hallel which means praise, though some traditions call it the cup of acceptance while still others use it as the cup of Elijah. The latter combine the second cup (plagues) with hallel—because we praise God for the plagues He used to bring us out of Egypt.

Jewish tradition says little else about the cups—though we’re told they should be filled with red wine to remind us of the blood of the Passover lamb.

Jesus and the Third Passover Cup

The New Testament names one of the cups—the cup taken after supper, which is traditionally the third cup. Jesus calls this cup “the new covenant in My blood, which is shed for you” (Luke 22:20). The Apostle Paul calls it, “the cup of blessing which we bless,” as well as “the cup of the Lord” (1 Corinthians 10:16,21).

Both Jesus and Paul draw on something from Jewish tradition to provide insights not previously understood. By calling the cup “the new covenant in my blood,” Jesus makes a direct reference to the promise of Jeremiah 31. God had declared that He would make a new covenant because the previous covenant had become “broken” (Jeremiah 31:32). To violate a covenant agreement with God would surely incur His wrath and judgment—a terrible cup! But instead, God promised a new covenant of grace and salvation.

Jesus declared that this new covenant would be poured from the cup of salvation in His blood. The cup of redemption stood for more than the Hebrews’ escape from Egypt; it stood for the plan and purpose of God for all the ages. Judgment and salvation, wrath and redemption are brought together in the mystery of one cup, explained by the Messiah in that upper room. Jesus was not speaking of the cup in a purely symbolic manner. He was describing events that would soon occur in His own life.

The Agony of Judgment and the Promise of Blessing

Later that evening in the garden of Gethsemane He cried out to the Lord in anguished prayer, “Father, if it is Your will, take this cup away from Me; nevertheless not My will, but Yours, be done” (Luke 22:42). In His humanity, Jesus could wish that this cup of judgment—the one that everyone except Him deserved for breaking of God’s covenant—would pass over Him. Yet, as the obedient Son of God, Jesus knew that the cup of blessing could only be poured out for the salvation of many if He would first drink the cup of God’s judgment on all humanity.

Despite the agony of separation from the Father, our Lord was willing to drink this cup, to bear this judgment, to suffer this horror and death that we might be free and forgiven. No wonder the Apostle Paul calls this “the cup of blessing which we bless.” What greater blessing can there be than that which Messiah purchased for us in His death, burial and resurrection?

In calling this the cup of blessing as it was known in the Jewish Passover, the Apostle Paul points out the powerful connection between Passover and Holy Communion. The roots of this sacrament are sunk deep in the eternal plan of God, which is unfolded through the pages of Scripture, as well as in the traditions of God’s chosen people, the Jews.

Redemption and Forgiveness: a Pre-Passover Story

Do you remember the story of Joseph and his brothers? After they betrayed and sold him into slavery in Egypt, God exalted Joseph to a place of great prominence and power. During a famine his brothers came to Egypt to buy grain. They didn’t recognize the mighty prince of Egypt as their own brother, yet Joseph recognized them. He kept his identity a secret and demanded that they return with their youngest brother, to prove they weren’t spies.

Joseph had a plan. He hid his own silver cup in his youngest brother’s sack of grain. As the sons of Israel were returning home for the second time, Joseph’s soldiers intercepted them. They found Joseph’s cup and accused Benjamin of theft. That cup became an indictment against Benjamin and a symbol of judgment—certain death, as far as the brothers could see. They all tore their clothes in horror and returned with Benjamin to Egypt.

There they discovered the true identity of the prince of Egypt and were reunited with the brother who had every right to execute all but the youngest—not for his silver cup—but for selling him into slavery. The cup that brought them back to Egypt was, to them, a symbol of judgment and death. Yet, it became the occasion for redemption and forgiveness.

Redemption in the Passover

How I long for my Jewish people to find redemption and healing and forgiveness in the cup of the New Covenant, through Messiah Yeshua (Jesus). I pray that every gospel tract our Jews for Jesus staff distributes, every book or video we mail, every personal visit we conduct may become like that cup of Joseph, hidden away for God’s purpose, leading to final salvation in Jesus. As we remember the story of Passover, as we celebrate the triumph of the Lamb (often during the season of Jesus’ resurrection). Won’t you join me in praying that the mystery of this cup of blessing, which we bless, will be made known to the Jewish people as well?

The Passover Symbols and Their Messianic Significance

From Passover to Pentecost