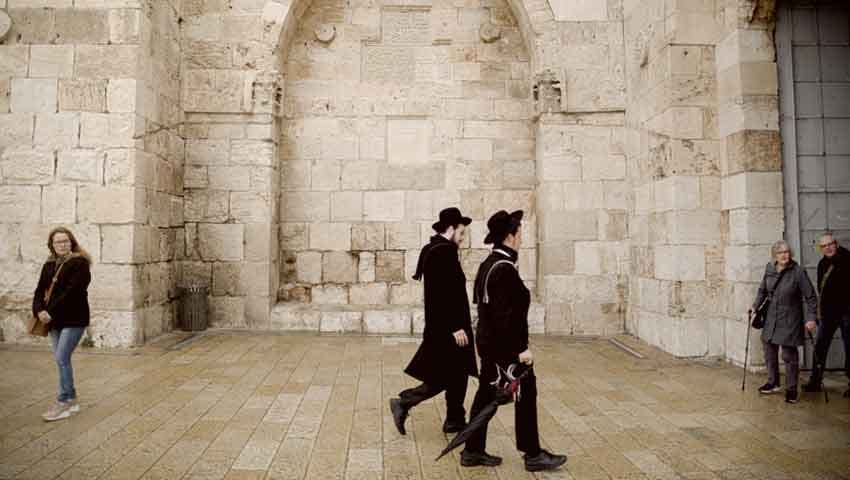 How do you respond when people say that the Jews killed Jesus?

As a Jewish person, it’s not uncommon to hear the occasional comment about penny-pinching frugality. It’s not irregular to be asked abrupt questions about our religious practices or political stances. Occasionally, one could even be the recipient of a string of incoherent obscenities. None of the above are acceptable.

But unfortunately, one of the most common unacceptable phrases a Jewish person can hear is this: “The Jews killed Jesus.”

Such condemnations have plagued the Jewish people for the last two thousand years, acting as the fuel behind countless antisemitic atrocities throughout history. They have emerged from the mouths of self-proclaimed Christians, from atheists—from both those who consider themselves religious and those who do not. And it has to stop.

Here are five ways to respond to someone who accuses the Jews of killing Jesus:

1. Jesus was Jewish. All of his first followers were Jewish.

Behind a statement like, “The Jews killed Jesus” often lies antisemitic bias. This charge is especially ridiculous when you consider one simple fact: Jesus was a devout, Torah-following Jew. He was born and raised in Israel. All of his first followers were Jewish and it was those early Jewish believers in Jesus who spread the Good News to Jew and Gentile alike. There remain a substantial number of Jewish people who believe in him today – our organization, Jews for Jesus, is living proof.

Jesus clearly identified himself with the Jewish people.

At no point did Jesus ever reject his cultural background. He attended and taught in the synagogue, went up to Jerusalem and spoke with the people at the feasts, and in one lively exchange with a Samaritan woman, clearly identified himself with the Jewish people: “You worship what you do not know; we worship what we know, for salvation is from the Jews” (John 4:22).

2. How could you blame an entire people group for something that happened two thousand years ago?

Let me put it this way: it makes as much sense as walking up to Mindy Kaling, star of The Mindy Project, and accusing her of murdering Mahatma Gandhi. Or calling out Robert De Niro for his hand in the death of Julius Caesar. Ridiculous. Just like it’s preposterous to blame all Indians for Gandhi’s assassination, or all Italians for the demise of Caesar, it’s ludicrous to chastise the Jewish people for the death of Jesus—especially two millennia later.

3. Christianity wouldn’t have been offered to the world if Jesus hadn’t died.

In order for salvation – the inheritance of the Jewish people – to be available to Gentiles, it first had to be rejected by most of its beneficiaries. If a majority of the people of Israel had not rejected Jesus as being the Messiah foretold in the Tanakh, the story would have ended early. The Jewish people would have claimed their inheritance, and the rest of the world would have remained in ignorance. But because many of our people did not recognize Jesus as the fulfillment of their Scriptures, his message of reconciliation with the God of Israel was extended to the rest of the world.

And that was always the plan. Way back in the book of Isaiah, God said of the Messiah: “It is too light a thing that you should be my servant to raise up the tribes of Jacob and to bring back the preserved of Israel; I will make you as a light for the nations, that my salvation may reach to the end of the earth” (Isaiah 49:6).

The Gentile Christian is to make the Jewish people envious of their inheritance.

Does this mean that His chosen people, the Jews, are no longer offered their own inheritance of salvation? No. As Paul, the first-century Jewish follower of Jesus, puts it: “So I ask, did they stumble in order that they might fall? By no means! Rather, through their trespass salvation has come to the Gentiles, so as to make Israel jealous. Now if their trespass means riches for the world, and if their failure means riches for the Gentiles, how much more will their full inclusion mean!” (Romans 11:11–12). The role, then, of the Gentile Christian is to make the Jewish people envious of their inheritance, drawing them to their own birthright – not to push them away in hostility.

The splendor and power of Jesus’ death on the cross lies in its sacrificial nature. Jesus voluntarily laid down his life. In that sense, nobody killed Jesus.

Nineteenth-century preacher Octavius Winslow said: “Who delivered up Jesus to die? Not Judas, for money; not Pilate, for fear; not the Jews, for envy; but the Father, for love!”

God allowed Jesus to die because of our sins.

So if you’re looking to place blame, consider this: every human individual is responsible for the death of Jesus. It was because of our sin that he willingly succumbed to the death penalty, experiencing the punishment for our fatal mistakes. Speaking of the Messiah, Isaiah said this:

Note the second half of the above verse from Isaiah 53: “He shall see his offspring; he shall prolong his days; the will of the Lᴏʀᴅ shall prosper in his hand.” The Messiah could not see his “offspring” (those who would believe in him) and “prolong his days” unless he rose from the dead.

All four accounts of Jesus’ life in the New Testament – the Gospels of Matthew, Mark, Luke, and John – give a clear account of the resurrection of Jesus. Paul wrote that Jesus was seen by more than 500 of his followers after he rose from the dead (1 Corinthians 15:6). It is the resurrection that provides those who believe in Jesus the hope that they too will live forever with him after they die.

If there is no corpse, there is no crime. Yes, Jesus died, but he rose from the dead and is alive, ready to forgive and receive all those who will put their trust in him.

Looking for more information? Feel free to connect with us directly on LiveChat or by leaving us your contact info here.

Why Did Jesus Need to “Die for Our Sins?”

Is Jesus a Rabbi?