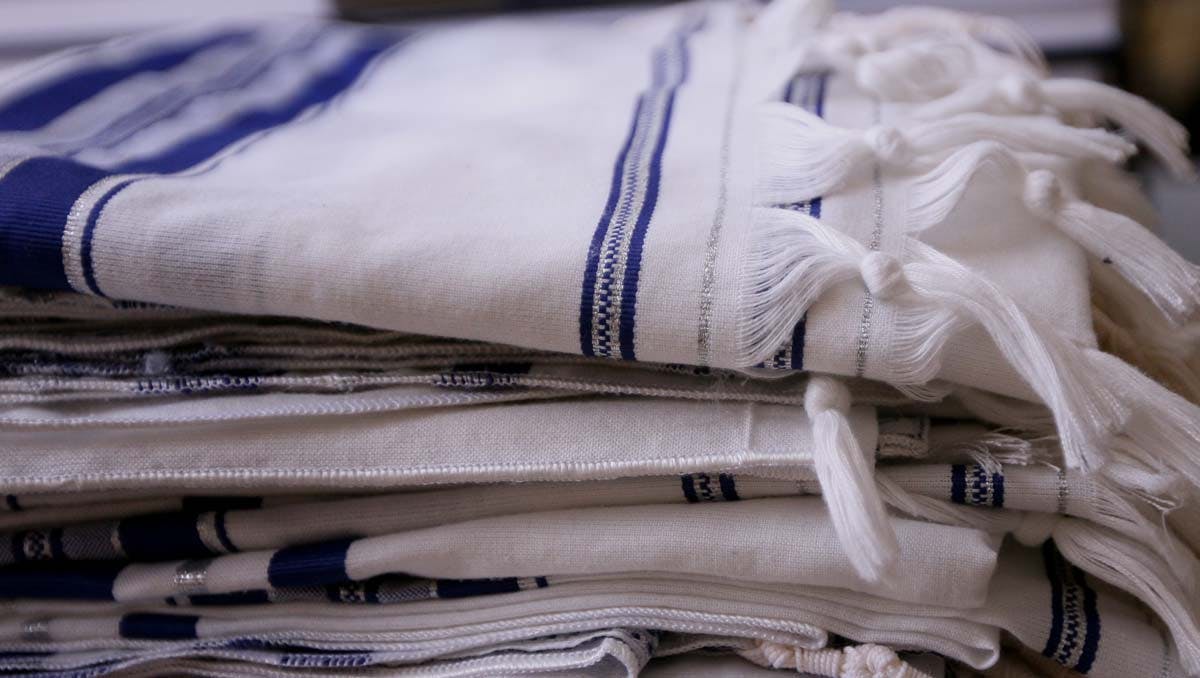 The Tallit and Tzitzit: Their Biblical Symbolism and Significance

At any given Saturday morning synagogue service, you will notice all the men and many boys draped in white, fringed prayer shawls, bordered with black or blue stripes—the tallit. Eastern European Hebrew pronounces the word TAH-liss (plural tallesim, tah-LAY-sim); in modern Hebrew it’s tah-LIT. The “tasseled fringes” on the tallit are the tzitzit (TSI-tsit).

This common artifact of Jewish tradition has a rich biblical history behind it that underscores significant spiritual lessons concerning God’s character and our obedience in response.

1. To Remind Israel of Who They Were

Originally the tallit was a four-cornered outer garment with the attached fringes (tzitzit). Though the wearing of the tallit has its basis in Old Testament Scripture, the word itself is not found in the Bible. The tzitzit (tassels), however, are:

The LORD said to Moses, “Speak to the people of Israel, and tell them to make tassels on the corners of their garments throughout their generations, and to put a cord of blue on the tassel of each corner. And it shall be a tassel for you to look at and remember all the commandments of the LORD, to do them … and be holy to your God.” (Numbers 15:37–40)

You shall make yourself tassels on the four corners of the garment with which you cover yourself. (Deuteronomy 22:12)

The tassels or fringes were meant to remind Israel of God’s commandments.

The real significance of the tallit is not in the garment itself, but in the fringes. In modern terms, it might be likened to a sweatshirt or stadium jacket, where the importance lies not in the actual piece of clothing, but in the slogan or school emblem it carries. The tassels or fringes were meant to remind Israel of God’s commandments.

Along with the primary purpose of the tzitzit based on the Pentateuch, we find another, later meaning. In ancient times, tassels were part of the hem of a garment, and the hem symbolized the wearer’s authority. When David spared Saul’s life in the cave at En Gedi, he cut off the corner of Saul’s robe, symbolically demonstrating that the king’s authority would be cut off. This is seen in Saul’s response:

And now, behold, I know that you shall surely be king, and that the kingdom of Israel shall be established in your hand. (1 Samuel 24:20)

Tzitzit demonstrated that the wearer was more than a commoner—he was a noble or a royal personage.

The colors of the tzitzit also carried meaning. Among the white cords on each tassel there was one blue strand. This color combination was part of the trappings of royalty:

There were white cotton curtains and violet hangings fastened with cords of fine linen and purple to silver rods and marble pillars, and … couches … of gold and silver on a mosaic pavement of porphyry, marble, mother-of-pearl, and precious stones. (Esther 1:6)

Then Mordecai went out from the presence of the king in royal robes of blue and white, with a great golden crown and a robe of fine linen and purple. (Esther 8:15)

Then they shall put on it a covering of goatskin and spread on top of that a cloth all of blue, and shall put in its poles. (Numbers 4:6)

You shall make a veil of blue and purple and scarlet yarns and fine twined linen. It shall be made with cherubim skillfully worked into it. (Exodus 26:31)

You shall make a screen for the entrance of the tent, of blue and purple and scarlet yarns and fine twined linen, embroidered with needlework. (Exodus 26:36)

Color symbolized royalty, and the fabric stood for priestly holiness

While the color symbolized royalty, the fabric of the fringed garment stood for priestly holiness. According to Deuteronomy 22:11 and Leviticus 19:19, the common Israelite was forbidden to wear a garment of mixed wool and linen, a combination called sha’atnez (SHAT-nez). The reason, not stated in the text, is apparently because the priestly garments were made of that blend (the “thread” that is not designated as linen below is wool).3

They shall make the ephod of gold and blue and purple and scarlet thread, and fine linen thread. (Exodus 28:6)

And a sash of fine linen and blue and purple and scarlet thread woven as the LORD had commanded Moses. (Exodus 39:29)

Although sha’atnez was a holy combination, that did not mean that the wearer became more spiritual. It simply marked the wearer as being separated for God’s service. Early rabbinic sources, perhaps reflecting the still earlier biblical practice, taught that the tzitzit were made of this very combination of wool and linen. The blue cord was wool, the other threads, linen. In other words, for this purpose only, the common Israelite would wear a garment similar to that of the priests.

The tzitzit was a physical reminder to the Israelites of who they were, who God was, and what He required of them.

Now therefore, if you will indeed obey my voice and keep my covenant, you shall be my treasured possession among all peoples, for all the earth is mine; and you shall be to me a kingdom of priests and a holy nation. (Exodus 19:5–6)

This role depended on Israel’s obedience to God. The tzitzit was a physical reminder to the Israelites of who they were, who God was, and what He required of them.

Rabbinic Laws about the Tallit and Tzitzit

The rabbis have developed many laws pertaining to the tallit and tzitzit, in addition to what is found in the Bible:

Jesus and the Tallit and Tzitzit

In the New Testament, the tallit and tzitzit are mentioned as an ordinary all-day garment. Condemning the ostentatious religious practices of some people, Jesus referred to the extreme length of their tzitzit:

They do all their deeds to be seen by others. For they make their phylacteries broad and their fringes long. (Matthew 23:5)

Jesus himself wore a garment with tzitzit. Sick people touched the hem of Jesus’ garment, that is, the tassels themselves:

Behold, a woman who had suffered from a discharge of blood for twelve years came up behind him and touched the fringe of his garment. (Matthew 9:20)

She came from behind him and touched the fringe of his garment, and immediately her discharge of blood ceased. (Luke 8:44)

[They] implored him that they might only touch the fringe of his garment. And as many as touched it were made well. (Matthew 14:36)

Wherever he came, in villages, cities, or countryside,  they laid the sick in the marketplaces and implored him that they might touch even the fringe of his garment. And as many as touched it were made well. (Mark 6:56)

These verses support the earlier theory concerning the Old Testament account of David and Saul—that the hem or edge of a garment stood for the wearer’s authority. The bleeding woman believed that if she could only touch the hem of Jesus’ garment, she would experience the power of his person and authority. Her act was not a matter of superstition, but a silent cry for Jesus to grant her his personal attention and healing power.

In contemporary terms, the account might be likened to the public appearance of a popular politician or musician where people want to shake hands or in some way touch and connect with a celebrity. Jesus allowed those who “connected” with him by touch to experience who he was: the Great Physician.

How we present ourselves and act in our daily lives reflects a heart, mind, and soul that is committed to God

Spiritual Lessons from the Tallit and Tzitzit

Joseph Telushkin compares the tallit with its fringes to an “ethical string-around-the-finger.”5 Another compares it to a soldier’s uniform, which makes us “mindful to whom one owes one’s allegiance.”6 What we are wearing often affects how we behave.

The symbolism of the tallit reminds Jewish believers in Yeshua of their identity in the Messiah. Now, not only Israel, but all humanity has the opportunity through Messiah Yeshua to become “a chosen race, a royal priesthood, a holy nation, a people for his own possession, that you may proclaim the excellencies of him who called you out of darkness into his marvelous light” (1 Peter 2:9). Of course, as in ancient times, such a privilege comes when we commit our lives to obedience to God.

While the New Testament does not call Jewish followers of Jesus to wear the tallit or tzitzit, there are still other “garments of identification,” such as clothing with Christian slogans, jewelry that bears the name of Jesus, or special head coverings that women can wear during worship. However, our identification as followers of Jesus goes further. Yeshua calls us to be obedient to him in the way we act. How we present ourselves and act in our daily lives reflects a heart, mind, and soul that is committed to God and proclaims that Jesus is our King—reminding us and others of him. In the words of Revelation 1:6:

[Yeshua] made us a kingdom, priests to his God and Father, to him be glory and dominion forever and ever. Amen.

2. Jacob Milgrom, Numbers. The Traditional Hebrew Text with the New JPS Translation (Philadelphia and New York: Jewish Publication Society, 1990), 411. Much of the following material on the significance of the tzitzit is based on Milgrom’s discussion.

3. Ezekiel 44:17 does not contradict this because many of the regulations described for Ezekiel’s temple are different than the laws found in the Five Books of Moses. The Mishnah (Kilayim 9:1) confirms that the priests who served in the Temple in the time around Christ wore the linen-and-wool mixture.

5. Joseph Telushkin, Jewish Literacy: The Most Important Things to Know about the Jewish Religion, Its People, and Its History (New York: William Morrow and Company, rev. ed. 2008), 737.