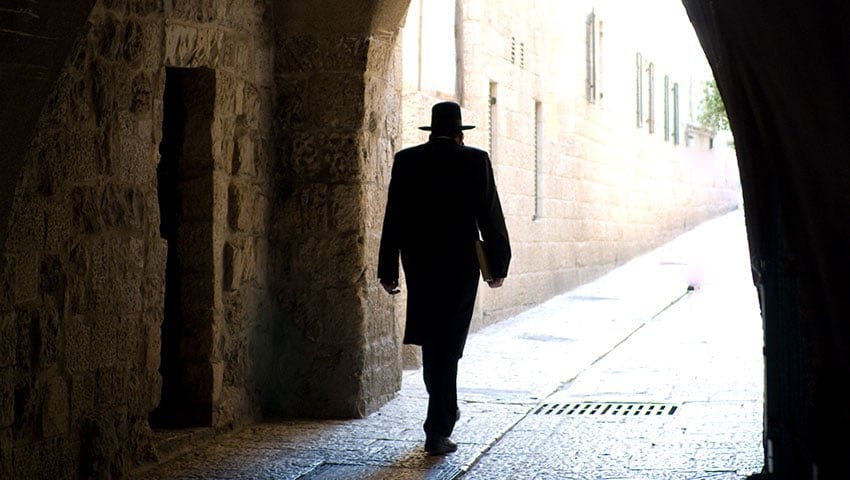 The Rabbis’ Dilemma: A Look at Isaiah 53

The subject was never discussed in my pre-war-Poland Hebrew school. In the rabbinical training I had received, the fifty-third chapter of the book of Isaiah had been continually avoided in favor of other, “weightier” matters to be learned. Yet, when I first read this passage, my mind was filled with questions:

Behold, my servant shall prosper, he shall be exalted, and extolled, and be very high. As many were astonished at thee; his visage was so marred more than any man, and his form more than the sons of men: So shall he sprinkle many nations; the kings shall shut their mouths at him: for that which had not been told them shall they see; and that which they had not heard shall they consider.

Who would have believed our report? and to whom is the arm of the Lord revealed? For he grew up before him as a tender plant, and as a root out of a dry ground: he had no form nor comeliness; and when we see him, there is no beauty that we should desire him. He was despised and rejected of men; a man of sorrows, and acquainted with grief: and as one from whom men hide their face he was despised, and we esteemed him not.

Surely he hath borne griefs inflicted by us, and suffered sorrows we have caused: yet we did esteem him stricken, smitten of God, and afflicted. But he was wounded through our transgressions, bruised through our iniquities: the chastisement of our peace was upon him, and with his wounds we were healed. All we like sheep have gone astray; we have turned every one to his own way; and the Lord hath caused the iniquity of us all to fall upon him.

He was oppressed, and he was afflicted, yet he opened not his mouth: as a lamb which is brought to the slaughter, and as a sheep before her shearers is dumb, so he opened not his mouth. He was taken away from rule and from judgment; and his life who shall recount? for he was cut off out of the land of the living; through the transgressions of my people was he stricken. And one made his grave among the wicked, and his tomb among the rich; although he had done no violence, neither was any deceit in his mouth.

But it pleased the Lord to bruise him; he hath put him to grief; if his soul shall consider it a recompense for guilt, he shall see his seed, he shall prolong his days, and the pleasure of the Lord shall prosper in his hand. He shall see of the travail of his soul, and shall be satisfied: by his knowledge shall my servant justify the righteous before many, and he shall bear their iniquities. Therefore will I divide him a portion with the great, and he shall divide the spoil with the strong because he hath laid open his soul unto death, and was numbered with transgressors; and he took off the sin of many, and made intercession for the transgressors.1

Who is this chapter speaking about? The words are clear—the passage tells of an outstanding Servant of the Lord whose visage is marred and is afflicted and stricken. He has not deserved any pain or wounds, but was wounded through our transgressions, bruised through our iniquities, and with his wounds we are healed. The text presents the suffering Servant of the Lord who dies as a korban, a recompense for guilt. He is then buried with the rich and wicked, but is gloriously resurrected to life. God permits His afflicted and, at the end, exalted Servant to endure this suffering in order to remove the sins of many.

Who is the Servant?

But who is this Servant? Our ancient commentators with one accord noted that the context clearly speaks of God’s Anointed One, the Messiah. The Aramaic translation of this chapter, ascribed to Rabbi Jonathan ben Uzziel, a disciple of Hillel who lived early in the second century C.E., begins with the simple and worthy words:

Behold my servant Messiah shall prosper; he shall be high, and increase, and be exceeding strong: as the house of Israel looked to him through many days, because their countenance was darkened among the peoples, and their complexion beyond the sons of men. (Targum Jonathan on Isaiah 53, ad Iocum)

We find the same interpretation in the Babylonian Talmud:

The Messiah—what is his name?…The Rabbis say, the leprous one; those of the house of Rabbi say, the sick one, as it is said, “Surely he hath borne our sicknesses.” (Sanhedrin 98b)

Similarly, in the Midrash Rabbah, in an explanation of Ruth 2:14:

He is speaking of the King Messiah: “Come hither” draw near to the throne “and dip thy morsel in the vinegar,” this refers to the chastisements, as it is said, “But he was wounded for our transgressions, bruised for our iniquities.”

In the same manner also in a later midrash, the Midrash Tanhuma, parasha Toldot, end of section, it says:

“Who art thou, O great mountain?” (Zechariah 4:7) This refers to the King Messiah. And why does he call him the “great mountain?” Because he is greater than the patriarchs, as it is said, “My servant shall be high, and lifted up, and lofty exceedingly.” He will be higher than Abraham who said, “I raise high my hand unto the Lord” (Gen. 14:22), lifted up above Moses, to whom it is said, “Lift it up into thy bosom” (Numbers 11:12), loftier than the ministering angels, of whom it is written, “Their wheels were lofty and terrible” (Ezekiel 1:18). And out of whom does he come forth? Out of David.

These are a few of the ancient interpretations attributing this chapter to the suffering and exalted Messiah.

The Servant is not Israel

Rashi (Rabbi Shlomo Itzchaki, 1040-1105) and some of the later rabbis, though, interpreted the passage as referring to Israel. They knew that the older interpretations referred it to Messiah. However, Rashi lived at a time when a degenerate medieval distortion of Christianity was practiced. He wanted to preserve the Jewish people from accepting such a faith and, although his intentions were sincere, other prominent Jewish rabbis and leaders realized the inconsistencies of Rashi’s interpretation. They presented a threefold objection to his innovation. First, they showed the consensus of ancient opinion. Secondly, they pointed out that the text is in the singular. Thirdly, they noted verse eight. This verse presented an insurmountable difficulty to those who interpreted this passage as referring to Israel. It reads:

He was taken away from rule and from judgment; and his life who shall recount? for he was cut off out of the land of the living; through the transgressions of my people was he stricken.

Were the Jewish people, God forbid, ever cut off out of the land of the living? No! In Jeremiah 31:35-37, God promised that we will exist forever. We are proud that Am Yisrael Chai—”The people of Israel are much alive.” Likewise, it is impossible to say that Israel suffered for the transgressions of “my people,” which clearly means Isaiah’s people. Surely Isaiah’s people are not the Gentiles, but the Jews.

Moshe Kohen, a 15th-century rabbi in Spain, explains the section:

This passage, the commentators explain, speaks of the captivity of Israel, although the singular number is used in it throughout. Others have supposed it to mean the just in this present world, who are crushed and oppressed now…but these too, for the same reason, by altering the number, distort the verses from their natural meaning. And then it seemed to me that…having forsaken the knowledge of our Teachers, and inclined “after the stubbornness of their own hearts,” and of their own opinion, I am pleased to interpret it, in accordance with the teaching of our Rabbis, of the King Messiah.2

The Servant is the Messiah

I may remark, then, that our Rabbis with one voice accept and affirm the opinion that the prophet is speaking of the King Messiah.2

Much to the point is the commentary of the great Jewish educator, Herz Homberg (1749-1841), who says:

According to the opinion of Rashi and Ibn Ezra, it relates to Israel at the end of their captivity. But if so, what can be the meaning of the passage, “He was wounded for our transgressions”? Who was wounded? Who are the transgressors? Who carried out the sickness and bare the pain? The fact is that it refers to the King Messiah.3

One of our greatest Jewish religious poets, Eliezer HaKalir, paraphrased this chapter in the 9th century into rhyme and metric poetry. It is recited in the Yom Kippur prayer of Kether:

Messiah, our righteousness, hath turned from us: we are in terror and there is none to justify us! Our Iniquities and the yoke of our transgressions He did bear for He was wounded for our transgressions: He carries our sins upon His shoulders, that we may find forgiveness for our iniquities and by His stripes we are healed. O eternal One the time is come to make a new creation: from the vault of heaven bring Him up, out of Seir draw Him forth, that He may make His voice heard to us in Lebanon, a second time by the hand of Yinnon.**

The words of the prophet Isaiah are words of hope. We have a glorious future and an abundant present if we appropriate the salvation made possible by the One who “was wounded through our transgressions and bruised through our iniquities.”

1. (Editor’s note: Isaiah 52:13-53:12, from the English translation of The Holy Scriptures, Revised in Accordance with Jewish Tradition and Modern Biblical Scholarship, by Alexander Harkavy, published by the Hebrew Publishing Company, New York, 1916)

2. Quotes from: Driver, S.R. and Neubauer, A. The Fifty-Third Chapter of Isaiah According to the Jewish Interpreters, Ktav Publishing House, New York, 1969.

3. One of Messiah’s names will be Yinnon according to rabbinic interpretation of Psalm 72:19.

Some Jewish Views of Jesus