How We Tell Other Jewish People About Jesus

We've been a bit controversial in the Jewish community. What do we actually do? 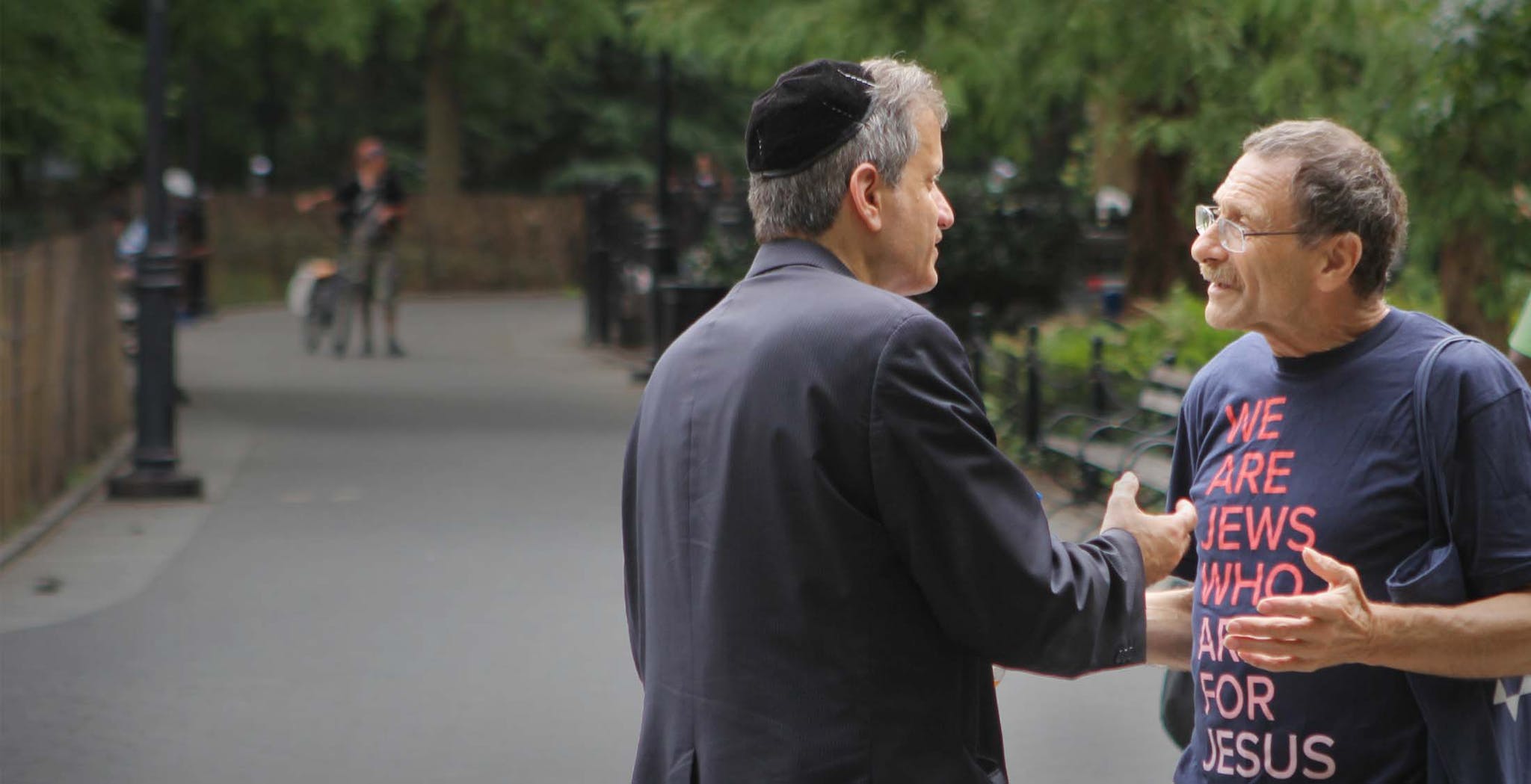 I remember my mother’s response when I told her I was applying to serve on the staff of Jews for Jesus. She said, “Oh Stephen, I hate to think of you dancing on a street corner like those Hare Krishnas.” I guess that was her way of letting me know she thought Jews for Jesus was a cult. I’m not so sure I allayed her fears when I said, “Don’t worry, Mom, they don’t dance!”

At the time I was 32 years old and had been working for 10 years in a “respectable” job as a social work administrator on the north side of Chicago. My Jewish mother had been endlessly proud of me, her youngest son, but now her pride was replaced by worry. Was I really going to give up my nice office and my commitment to helping troubled families to become a professional proselytizer?

The Problem with Being a Jew for Jesus

Underneath my mother’s concerns was the widely accepted notion at the time in the Jewish community that Jews for Jesus was a cult of non-Jews that preyed on lonely, vulnerable Jewish people, using traditional Jewish symbols to manipulate and deceive. Jewish leaders often presented us as nefarious characters who would do almost anything to lure unsuspecting Jewish people into our ranks.

In the past, many of our activities reflected the ‘60s and ‘70s counterculture.

Looking back on our work in those days, I can see how they might have arrived at that conclusion. In the past, many of our activities reflected the ‘60s and ‘70s counterculture in which our organization began. Marches, protests, posters, pamphlets, and brash challenges to the status quo were common back then. None of us shied away from being a bit controversial. In the wake of the civil rights movement, standing up as dissenters within the Jewish community was in keeping with the ethos of the times.

I remember handing out pamphlets once in San Francisco when another Jewish man took a couple minutes to give me a piece of his mind. “You don’t know anything! You’re an idiot!” Then he really got on a roll. “Obviously, you’ve been brainwashed! No self-respecting Jew would be out here handing out pamphlets about Jesus!”

I asked him who he thought Jesus was, and he continued, “I don’t want to talk to you about Jesus. I know who Jesus was.”

“Read my lips … there’s no way I’m going to stand here talking to some brainwashed fool about Jesus. Besides, I told you I already know all about him.”

Trying to get past the name-calling, I asked, “So then, you’ve read the New Testament accounts of his life?”

“No! I haven’t read the New Testament, and I don’t want to either.”

“Then where do your ideas about Jesus come from? Movies, books, your rabbi, television?”

“Look, I told you I don’t want to talk to you. Somebody got a hold of you and brainwashed you into this Jesus stuff.”

At that point, I had had about enough, so I tried my best to wrap up the conversation. “Help me understand. You’re telling me that you’ve never read the New Testament, the best source document about Jesus’ life, yet you know all about him? You won’t talk to me because I believe in him? So can I ask you another question?”

“Who’s brainwashed, me or you?”

I admit that I got a little too much enjoyment out of giving him some of his own medicine, but it was a truly frustrating conversation. Those were the days when the idea of a Jewish person believing in Yeshua (Jesus) was almost universally unacceptable. Jews for Jesus existed as a countercultural movement, looking to speak our truth to power.

But times have changed. The greater Jewish community is more tolerant toward Jews who believe in Jesus than it used to be. In 2013, the Pew Research Center raised eyebrows by releasing its finding that a sizable minority of the Jewish community (34%) thinks a person can be Jewish even if he or she believes Jesus is the Messiah.

We’ve learned that there’s often more to be gained from conversation than confrontation.

And we at Jews for Jesus have changed a lot too. We also aren’t as confrontational as I was back in the day in San Francisco. We are no longer into pamphlets and protests as the primary means to engage the wider Jewish community. We’ve learned that there’s often more to be gained from conversation than confrontation. Friendly, honest, and open dialog can also bring about a paradigm shift.

So, if we’ve largely moved away from pamphlets and protests, what do our staff members do to engage the wider Jewish community today?

What We Actually Do Now

First, we enjoy engaging with our communities. Sometimes we meet people through the activities we organize in public places, such as city centers, college campuses, and parks. For instance, we might invite people to paint something meaningful to them on a large canvas or to write on a board what they are grateful for. These are just simple ways to strike up conversations and learn about people’s views and experiences, opening doors for authentic dialogue.

Authentic friendship allows for conversations about issues that impact us as Jewish people.

Oftentimes, just being Jewish in a Jewish community can lead to interactions where we inevitably discuss Jewish issues, including topics of faith. Authentic friendship allows for deep and honest conversations about issues that impact us as Jewish people and as human beings. If others are open, we love to share what Yeshua’s life and teaching bring to bear on those issues. We enjoy hearing their perspectives, as well!

Second, another very important component of our organization is that we serve the poor. Jesus was always serving the poor in Israel during his ministry. That reflected his commitment to Torah and his love for his people.

We try to follow his example in a variety of ways. For example, we operate a soup kitchen and food truck in Israel that provide meals to the homeless, the addicted, and those trapped in prostitution. In Eastern Europe, we distributed food, medicine, and supplies to thousands of refugees who were victims of the Russian invasion of Ukraine. Part of that effort was helping Ukrainian Jewish refugees secure temporary housing or make aliyah.

Third, we also engage with Jewish people by hosting events in our own spaces, like our coffee shop in Los Angeles, our community house in New York, our art space in Tel Aviv, or our bookshop in Sydney, Australia.

Whether it’s coffee tastings, art exhibitions, music performances, Torah studies, or Shabbat and holiday celebrations, we always keep two things in mind. One is simply to create engaging environments for our Jewish community to thrive. The other is to create a safe space for conversation about spiritual matters and, yes, including conversations about Jesus.

Even though the Jewish community has softened somewhat on Jesus, for many, he’s still a non-starter. We get that. But if you read our staffs’ stories, you’ll see that many of us were also very dismissive or even openly hostile toward Jesus at first.

It’s a little like Moses and the burning bush. At first, you see something that doesn’t make sense, so you cautiously approach to check it out. And then God shows up and defies your wildest expectations. What can you do then but go back and try to tell your people what you’ve experienced?

Underlying all we do are two basic Jewish values: love of the Jewish people and love of God.

Our friendships, public activities, community services, events, and spaces are all intended to enable Jewish life and, whenever it’s welcomed, spark exploration and dialogue about the Messiah.

That is what being Jewish and being for Jesus is all about.