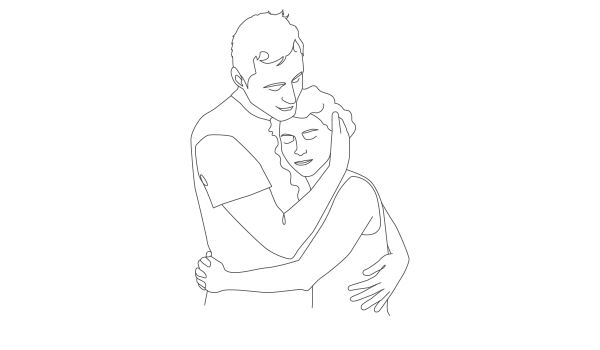 In America we have the well-known holiday of love called Valentine’s Day. In Brazil there is the “Dia dos Namorados” (Day of Lovers), in Argentina a “sweetness week” and in China Qixi, a traditional festival celebrating love and marriage. Spinoffs have taken off like “Singles Awareness Day” and even “Black Day,” when Korean singles clad in black get together, eat black noodles and throw a pity party! But did you know that Jews in Israel celebrate the holiday of love on a day called Tu B’Av (“the fifteenth of [the summer month of] Av”), whose roots go back to ancient times? To many Jewish people this holiday has become the “Jewish Valentine’s Day” or “Jewish Sadie Hawkins Day.”

While we don’t know exactly when Tu B’Av began, it is first mentioned in the Mishnah (compiled and edited at the end of the second century), in which Rabban Shimon ben Gamliel said:

There were no better (i.e. happier) days for the people of Israel than the Fifteenth of Av and Yom Kippur, since on these days the daughters of Israel/Jerusalem would go out dressed in white and dance in the vineyards. What were they saying: Young man, consider whom you choose (to be your wife)? (Ta’anit 4).

One Biblical explanation traces the origins of Tu B’Av to the account in which the prohibition against intermarriage was lifted and the tribe of Benjamin was allowed to intermarry with the other tribes. A rabbinic explanation claims that Tu B’Av was the day the generation that wandered in the wilderness ceased to die; this would seem to sync up with the tradition that Tisha B’Av (which falls six days before) marks the day that God condemned the Israelites to wander in the wilderness for forty years. Still another explanation says that the Jews who died in the Bar Kokhba revolt (traditionally dated on Tisha B’Av) were preserved for the six days that the Romans forbade burial (a blatant insult to Jewish funeral traditions). Like many holidays, Tu B’Av has many, many explanations1, but one generally agreed upon meaning: romantic love as ordained by God is beautiful and worthy of celebration.

How Tu B’Av Is Observed

Many Jews today treat Tu B’Av rather like Valentine’s Day—it’s an occasion to go out and celebrate but is not formally recognized by the Israeli government. Many couples get married on Tu B’Av, as it is considered to be a propitious day for weddings. Attempts have been made to replicate the tradition of dancing in the vineyards wearing white, but by and large these throwbacks have not gained a hold on a wider Jewish populace. Historically, like its counterpoint, Tisha B’Av, Tu B’Av celebrates a number of historical events that supposedly took place on that date in years past (see Origin of Tu B’Av above).

No prescribed liturgy exists for Tu B’Av. The only tradition that has been preserved is “omitting Tachanun—a somber part of the daily prayers omitted on other holiday and joyous days.”2

In ancient times, the daughters of Israel would go dancing in the field on Tu B’Av, and matches would be made between them and the men. In Eastern Europe, this bucolic tradition was adapted to a different culture. Ashkenazi Jews would flock to the fair on Tu B’Av to make matches between their sons and daughters. Times have changed—most of us don’t find love at a fair!—but the day still celebrates romantic love, which in its proper form reflects God’s love for us.

Tu B’Av in the New Testament

There is no mention of Tu B’Av in the New Testament.

Like Valentine’s Day, Tu B’Av is a celebration of love, and love is worthy of celebration.  God’s love, as seen in the provision of redemption through Yeshua , was the greatest act of love. As we read in 1 John 4:10-11: “Herein is love, not that we loved God, but that he loved us, and sent his Son to be the propitiation for our sins. Beloved, if God so loved us, we ought also to love one another.” Moreover, God’s love for His people is often likened to a bridegroom’s love for his bride. In Hosea 2:19-20, 23 we read:

And in Revelation 21:2: “And I, John, saw the holy city, New Jerusalem, coming down out of heaven from God, prepared as a bride adorned for her husband.” All love—romantic or not—comes from God, and if we will be his, we will forever be bound in a loving covenant with him. We would like to hear how you celebrate God’s love in your life. Please tell us on Live Chat or leave us a message in the tab on the bottom right-hand side of this page.

3. One interesting tradition that Sephardic Jews maintain on another holiday, Shavuot, is reciting a ketubah (marriage contract) between God and Israel. This idea is inspired by these verses from Hosea.