Simchat Torah: Rejoicing in the Torah 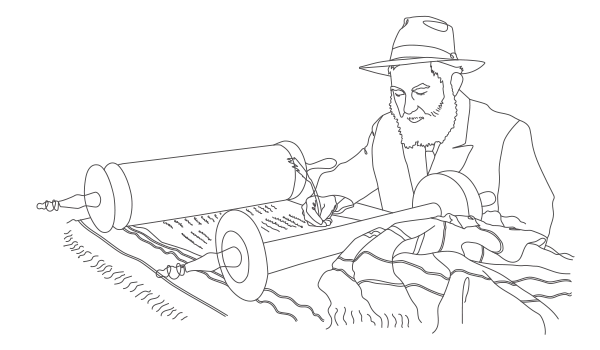 Simchat Torah means “rejoicing in the Torah.” On this day, Jews celebrate the Torah—the first five books of the Bible—and mark the end of one yearly cycle of Torah readings and the beginning of another. Great fanfare, including dancing and the singing of piyyutim (liturgical poems), accompanies the holiday.

We might think of Simchat Torah as the spiritual complement to Shavuot, when we commemorate the giving of the Torah, in particular the Ten Commandments. But whereas Shavuot can be more solemn, its cousin Simchat Torah is more joyful.

Simchat Torah ultimately derives from Shemini Atzeret, the “eighth day of assembly” following Sukkot. The purpose of Shemini Atzeret was always rather unclear, and more so after the destruction of the Second Temple. Since the offering of sacrifices prescribed for Shemini Atzeret was no longer possible, that day was distinguished by little other than an added prayer for rain and cessation from work.

In the post-Temple period, the rabbis strove to come up with a new purpose for the day. “The focus on Torah became deeply ingrained in the exilic mind-set. Torah as it was so redefined became the lifeline of the nation of Israel. The eighth day of Sukkot became a day of rejoicing in the Torah.” Thus “Simchat Torah” was born, eventually overtaking the biblical but hard-to-celebrate Shemini Atzeret.

Simchat Torah is neither discussed nor recorded in the Talmud, and the earliest evidence of its existence dates back only to the Middle Ages. Prior to that time, Jewish congregations read the Torah according to one of two cycles: annual (one year) or triennial (three years). By the Middle Ages, the annual cycle prevailed and the triennial cycle became largely obsolete, although still practiced in some Jewish cultures.

How Simchat Torah Is Observed

The number seven is significant in Jewish tradition. Thus on Simchat Torah, respected members of the congregation will carry the Torah scroll and bear it through the synagogue seven times during what are known as hakafot or circuits. The seven hakafot (singular: hakafah) act as a substitute for the seven daily processions that accompanied Sukkot during the Second Temple period.

The hakafot unfold with great fanfare. Singing and dancing, either with Israeli folk steps or in Hasidic rounds, mark this ceremony as a uniquely joyful and fun occasion. Congregants touch the Torah as it passes either with their fingertips or with a siddur (prayer book), which they bring to their lips and kiss as a sign of love and reverence for God’s Word. (Interestingly, Jews complete hakafot on other important occasions, including weddings—a bride often circles her bridegroom seven times—and funerals—when the bereft circle the coffin of the deceased seven times. The hakafot also recall the story of Jericho, when Joshua led the Jews in processions around the city of Jericho once every day for six days and seven times on the seventh day.

The hakafot take place both during the evening and the morning services. After the morning hakafot are complete, special aliyot (lit. “goings up”) take place. During the aliyot, esteemed members of the congregation—and sometimes many others as well—go up to the front of the synagogue and recite the blessings before each portion of the Torah reading The man who reads from Deuteronomy is called the hatan Torah or bridegroom of the Torah while the one who reads from Genesis is known as the hatan Bereshit or bridegroom of the beginning (i.e., Genesis). Sometimes, so that more people have a chance for an aliyah, congregations will allow the same parsha (Torah portion) from the end of Deuteronomy to be read several times over. All those honored with an aliyah have one thing in common: they are summoned to the front of the synagogue by the singing of special piyyutim which are about the beauty and merit of reading from the Torah.

Simchat Torah holds a special place in the hearts of children, who receive candy and special honors on this day. During the morning service, children gather in front to receive a blessing under a tallit (prayer shawl), an honor they do not receive on other days. Many tote around little degelim Simchat Torah (Simchat Torah flags) decorated with colorful motifs; others carry apples whose tops have been lopped off to make room for a little candle. In some congregations, the children go up for a special abbreviated aliyah called kol ha-ne’arim (“all the kids”).

Simchat Torah is so well loved that it has spilled over into other days. Many Hasidic Jews process in hakafot on Hoshana Rabba (the last day of Sukkot, i.e. the eve of Shemini Atzeret/Simchat Torah). And many Jews in Israel celebrate a second day of Simchat Torah. During this “bonus round,” processions spill out into the streets and officials and public figures (military, political, humanitarian) are granted the honor of taking part in the hakafot in public.

Simchat Torah in the New Testament

There is no mention of Simchat Torah in the New Testament.

Although it focuses on Torah—which after all is part of the Bible— Simchat Torah is, ironically, not a holiday found in the Scripture itself. Nevertheless, its celebration reminds us of the supreme place of the Bible throughout Jewish history and as a God-given guide for us today. Agur, a rather obscure figure found in the book of Proverbs, tells us that “Every word of God proves true; he is a shield to those who take refuge in him” (Proverbs 30:5). The New Testament, reflecting on the Hebrew Bible, says that, “All Scripture is breathed out by God and profitable for teaching, for reproof, for correction, and for training in righteousness, that the man [and woman] of God may be complete, equipped for every good work.” (2 Timothy 3:16-17)

This Simchat Torah, whether you are celebrating by attending synagogue or not, take some time to acknowledge the Maker and Giver of Torah—and the rest of the Bible. too!

Simchat Torah was established during the Middle Ages.

How are you celebrating your love for Torah, or any other part of the Bible, this Simchat Torah? We’d love to hear from you—either send us a message or chat with us