The Feast of Tabernacles 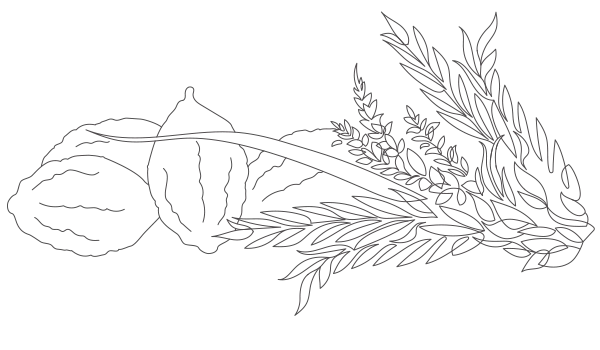 Sukkot, the Feast of Booths, commonly goes by another name, “The Season of Our Joy,” for joy predominates on this holiday more than any other. Jewish people around the world construct sukkot (singular: sukkah), frail huts or booths that remind us of God’s provision and our dependence on Him. Sukkot is a memorial to remind us of the building of booths during our ancestors’ wanderings in the wilderness: “The Feast of Tabernacles was an annual reminder to the people that God is the Great Shepherd who has chosen to ‘tabernacle among them,’ to protect and bless them wherever they wander.”1

In the Torah, the Lord gives Moses specific instructions for a harvest feast of thanksgiving:

[…]On the fifteenth day of the seventh month, when you have gathered in the produce of the land, you shall celebrate the feast of the LORD seven days. On the first day shall be a solemn rest, and on the eighth day shall be a solemn rest. And you shall take on the first day the fruit of splendid trees, branches of palm trees and boughs of leafy trees and willows of the brook, and you shall rejoice before the LORD your God seven days. . . . You shall dwell in booths for seven days. All native Israelites shall dwell in booths, that your generations may know that I made the people of Israel dwell in booths when I brought them out of the land of Egypt: I am the LORD your God. (Leviticus 23:39-43)

Despite the length and intricacy of God’s directions regarding Sukkot, in later times the holiday fell into disuse. The book of Nehemiah records that the people after many years of corruption and non-observance once more commemorated Sukkot during his reign by building booths:

And all the assembly of those who had returned from the captivity made booths and lived in the booths, for from the days of Jeshua the son of Nun to that day the people of Israel had not done so. And there was very great rejoicing. And day by day, from the first day to the last day, he read from the Book of the Law of God. They kept the feast seven days, and on the eighth day there was a solemn assembly, according to the rule. (Nehemiah 8:17-18)

Later, after the destruction of the Temple, some of the older rituals were shed and new ones took their place. As one author puts it, “The destruction of the temple gave Sukkot an identity crisis.”2 The result was an increased emphasis on the building of booths and the development of rituals relating to lulav—the Four Species of fronds bound together (“the fruit of splendid trees, branches of palm trees and boughs of leafy trees and willows of the brook”). All of this was to mimic the former processions at the Temple. Thus, the history of Sukkot is one of “adaptation,” of preserving what rituals could be preserved and discarding ones that were no longer practicable.3

How Sukkot Is Observed

Three main rites accompanied Sukkot in the Temple period: the water-drawing and libation ceremony, the illumination of the Temple, and the building of booths. But only the last of these is prescribed in the Torah—the first two seem to derive from other sources. One author writes: “Both these rituals were classified as ‘laws given to Moses at Sinai.’ This designation was given to a number of very ancient traditions that possessed biblical authority but were neither explicitly stated in Scripture, nor derived from Scripture by hermeneutical principles, nor were the result of rabbinic legislation.”4 Both the libation and illumination rituals reached their climax on Hoshanah Rabbah, the seventh day of Sukkot. Of these three observances, only the building of the sukkah is still practiced as it was in ancient times, since the other two rites depended on the existence of the Temple.

The three main rituals that accompanied Sukkot were:

In modern times, besides building the sukkah, Jews celebrate Sukkot by the waving of the lulav during service in synagogue. During the Temple period, our people used to make a daily procession about the Temple with the lulav. Today, we process with our lulav in the synagogue, once daily, while reciting Psalm 118:25 and special prayers called Hoshanot. On the seventh and final day of Sukkot, Hoshanah Rabbah, our people made seven processions about the Temple. One author writes: “On the seventh day of Sukkot, the procession would circle the altar seven times. At the conclusion, the participants would cry out: ‘Thine O Altar is the beauty! Thine O Altar is the beauty!’”6 In our own day, we make seven processions with the lulav in synagogue with additional prayers on Hoshanah Rabbah, as well as beating a bundle of five willow branches on the ground during this climactic ceremony.

Numbers 29 is read as the Torah portion on Chol Hamoed (intermediate days) and on Hoshanah Rabbah.7 Psalms 120-135, known as the Psalms of Ascent, are sometimes sung in remembrance of the ancient procession up the fifteen steps of the Temple.

Traditional Customs and Folklore of Sukkot

The practice of building and living in booths was preserved into the rabbinical period and beyond. Now every Jewish household can build its own sukkah. The more pious will take all of their meals in the sukkah and sleep there. Others use the sukkah as a way station—a place to have some meals but not all.

Decorating the sukkah is among the most beloved of Jewish traditions, and like other practices (Tashlikh on Rosh Hashanah, dreidel on Hanukkah, the hunt for the afikoman on Pesach) provides Jewish children with an opportunity to play and show off their creativity. We decorate the sukkah with various fruits like oranges and pomegranates as well as artwork and decorative touches.

The sukkah is a thing of beauty—fragrant, admitting starlight—but also frailty, letting in rain and prone to blow over when the wind is high: “These specifications [relating to the sukkah] were to illustrate both the transient natures of the shelter and of our earthly homes.”8 The sukkah also allows us to rejoice in community and show hospitality. We must work together to gather materials and turn canvas, rope, wood, thatch, palms, branches, and twigs into a convivial, haimische (homey) sukkah. And the sukkah must be a place not for oneself alone but for others. Integral to Jewish practice is inviting guests into the sukkah: the homeless, the indigent, the old, the frail, and the lonely.

Sukkot in the New Testament

There is a connection between the practice of “tabernacling” and the life of Yeshua:

In Yeshua (Jesus), God tabernacled among us. He chose to be born into a less-than-glorious space, where certainly the stars might have peeked through cracks in the roof, the elements might well have invaded. Nevertheless, in that lowly place dwelt the glorious presence of God, the transient and the eternal beautifully coming together in God’s provision and God’s presence.9

Not only that, Yeshua deliberately took the festival of Sukkot as an opportunity to speak about himself. The Gospel of John recounts his preaching in the outer Court of the Women on Hoshanah Rabbah:

On the last day of the feast, the great day, Jesus stood up and cried out, “If anyone thirsts, let him come to me and drink. Whoever believes in me, as the Scripture has said, ‘Out of his heart will flow rivers of living water.’” Now this he said about the Spirit, whom those who believed in him were to receive, for as yet the Spirit had not been given, because Jesus was not yet glorified. (John 7:37-39)

In speaking of the “living water,” Yeshua drew a  connection between the spiritual gift he would give and the spring of Siloam where water was drawn for the water-drawing ceremony, as well as with the “wells of salvation” mentioned in the book of Isaiah. Later he calls himself the Light of the World, again referring to the symbols of the holiday (in this case, the illuminated Temple) as harbingers of his arrival: “The Light of the World statement, like the Living Water statement, had a rich theological backdrop. Jesus was once again referring to a wealth of messianic prophecy that many would recognize.”10

When Jesus stood in the Temple claiming to be the Light of the World, He was making a radical statement. Those who say that Jesus never claimed to be God have not dealt with this statement. To stand in the middle of the Temple in conjunction with the Feast of Tabernacles and say, “I am the Light” was like saying, “I am the Shekinah, I am the pillar of fire.” It’s hard to imagine a more graphic claim to deity.11

For this reason, “many Christians regard the Feast of Booths as the consummate messianic holiday. Citing Bible verses that in the last days Gentiles will celebrate the festival and go up to Jerusalem to dance and sing with the Jewish people, many travel to Israel at this season to worship and to celebrate.”12

5. The Babylonian Talmud, trans. into English under the editorship of Rabbi Dr. I. Epstein, (London: The Soncino Press, 1952), Sukkah 5:1.

7. Similarly, the first and last days of Sukkot are “Holy Convocations” and days of rest; the intervening days are called hol ha-mo’ed (festival days), which do not involve Sabbath rest but do require dwelling in booths.

8. Brickner, Christ in the Feast of Tabernacles, 79.