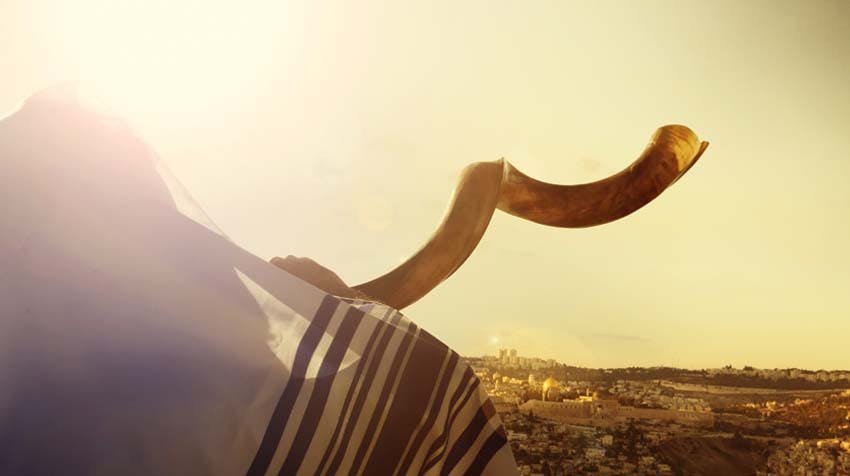 The Feast of Trumpets: background and fullfilment

Those are not orders shouted by a Klingon general, but the names of the various shofar (ram’s horn) blasts heard every year in the synagogue in the month of Tishrei. The first of Tishrei, variously falling in September or October, is known in the Bible as the Feast of Trumpets and more widely today as Rosh Hashanah.

Rosh Hashanah, meaning “the head of the year” in Hebrew, is known in English as the Jewish New Year. It is one of three holy festivals that the Lord commanded the Jewish people to observe in Tishrei, the seventh month of the Jewish calendar. (The reason it is known as the New Year even though it is the seventh month biblically is because there are several new years—religious, civil, and others.) The other two are Yom Kippur or the Day of Atonement (on Tishrei 10) and Sukkot or the Feast of Tabernacles (beginning on Tishrei 15). Besides heralding the arrival of Tishrei, the Feast of Trumpets also begins a 10-day period known as the Yamim Nora’im (Days of Awe) that falls between the Feast of Trumpets and the Day of Atonement. Those 10 days are a time for Jewish people to reflect on sin and repent in preparation for the latter day.

The Biblical Meaning of the Feast of Trumpets

There is, however, more to the Feast of Trumpets. Leviticus 23:23–25 maps out God’s commandments concerning this festival.

And the Lord spoke to Moses, saying, “Speak to the people of Israel, saying, In the seventh month, on the first day of the month, you shall observe a day of solemn rest, a memorial proclaimed with blast of trumpets, a holy convocation. You shall not do any ordinary work, and you shall present a food offering to the Lord.”

The day is to be a “memorial” with “blast of trumpets.” The blast of a trumpet or similar instrument could be used to rouse people to war or to march. In the context of this season, it is generally understood as a call to repentance since the Day of Atonement comes 10 days later.

We can find a further significance in the blowing of trumpets. Exodus chapters 19 and 20 are the account of God’s appearance on Mount Sinai and the giving of the Ten Commandments. Exodus 19:4–6 depicts God inviting the nation of Israel into a covenant. In a spectacular revelation, God manifests His presence in smoke and fire on the mountain, along with the fearful sound of a trumpet that causes the people to tremble.

When the trumpet sounds a long blast, they shall come up to the mountain…. On the morning of the third day there were thunders and lightnings and a thick cloud on the mountain and a very loud trumpet blast, so that all the people in the camp trembled. Then Moses brought the people out of the camp to meet God, and they took their stand at the foot of the mountain. Now Mount Sinai was wrapped in smoke because the Lord had descended on it in fire. The smoke of it went up like the smoke of a kiln, and the whole mountain trembled greatly. And as the sound of the trumpet grew louder and louder, Moses spoke, and God answered him in thunder. (Exodus 19:13, 16–19)

The events at Mount Sinai were stamped indelibly in the memory of the nation of Israel. And so, at the Feast of Trumpets, the sound of the shofar—the same word used in Exodus 20:18—reminds Israel that they are a people under covenant, a nation who has accepted the responsibilities of being God’s people. Being in covenant with God includes repenting of sin, a form of breaking the covenant, and then seeking atonement. So, covenant and repentance become hallmarks of this day.

What about the word “memorial” spoken of in Leviticus? The day serves both to remind Israel of the covenant with its need for repentance, but also to “remind” God of His covenant promises, which include restoration upon repentance from sin. When Scripture speaks of God being “reminded” of something or “remembering” something, it means that He is going to take action based on His past promises (see Genesis 8:1, Exodus 2:24). So, the Feast of Trumpets both implores God to accept Israel’s repentance and reminds the Jewish people that they have entered into a binding covenant with God.

The only other reference to this festival in the Torah (or Pentateuch) is in Numbers 29:1. Numbers 29:1–6 reiterate that this is a day “to blow the trumpets” and specifies the numerous sacrifices that were to take place on that day. Since sacrifices were a central component in the worship of ancient Israel, we understand that this was to be a day of worship. The mention of the sin offering “to make atonement” alongside other kinds of offerings reinforces that repentance is a main aspect of the day.

The Feast of Trumpets in the New Testament

The Feast of Trumpets is not mentioned in the New Testament. However, Yom Kippur, which follows 10 days afterwards, is found in Acts 27:9: “Since much time had passed, and the voyage was now dangerous because even the Fast was already over, Paul advised them.” Here the day is called by its prominent observance, fasting, and the context is that by that late in the season, ocean travel could be perilous. We can assume that Jews in the first century observed the Feast of Trumpets, but we are lacking details.1

The blast of a trumpet gathered attention and presaged something of note.

Trumpets are mentioned in the New Testament, but are not directly connected with the Feast of Trumpets. Jesus advises his followers in Matthew 6:2 to “sound no trumpet” when giving to charity, indicating how attention getting a trumpet blast was. In Matthew 24:31, 1 Corinthians 15:52, and 1 Thessalonians 4:16, the “trumpet” indicates the gathering of God’s people. Hebrews 12:19 alludes to the giving of the Law on Mount Sinai when “the sound of a trumpet” was one of the fearsome phenomena experienced by the nation Israel. Finally, the book of Revelation mentions a trumpet numerous times, either as the way a voice sounded (1:10; 4:1) or more often, as blown by angels (chapters 8–9). While none of these references allude to the Feast of Trumpets, they show that the blast of a trumpet gathered attention and presaged something of note. Similarly, the sound of the shofar on the Feast of Trumpets is meant to call the nation to attention and to the solemnity of repentance.

1. Alfred Edersheim, in his classic work The Temple—Its Ministry and Services, writes, “During the whole of New Year’s Day, trumpets and horns were blown in Jerusalem from morning to evening,”(https://www.ccel.org/ccel/edersheim/temple.xvii.html (he offers no source).

Shavuot, the Feast of Weeks: is it Jewish or Christian or both?

Yom Kippur in the Tanakh and New Testament