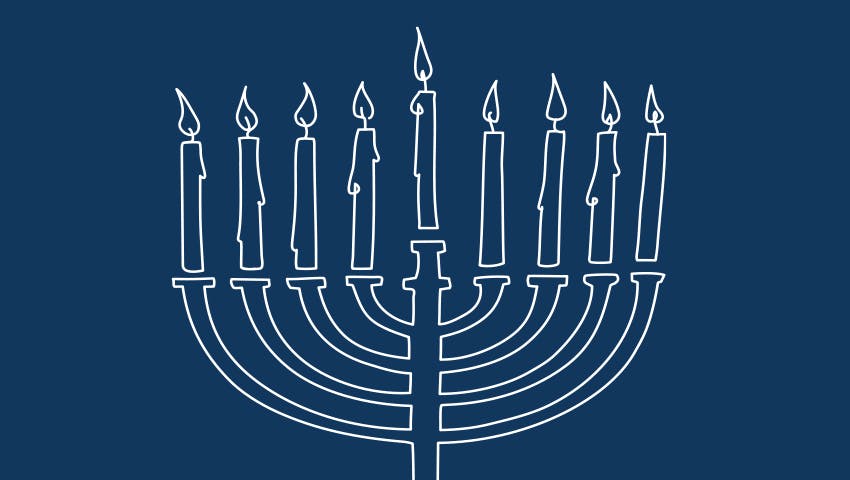 Now it was the Feast of Dedication in Jerusalem, and it was winter. And Jesus walked in the Temple, in Solomon’s porch.

That is the only biblical reference to a well-known winter holiday that Jesus celebrated, a holiday many will celebrate this month. You know it by another name, (hint: it’s not Christmas!). No, my Jewish people will celebrate the Feast of Dedication, commonly known as Hanukkah.

The Historical Origins of the Holiday

Many are surprised that the only Bible verse mentioning Hanukkah is found in the New Testament. That is simply because the holiday commemorates an event that occurred during the inter-Testamental period, approximately 165 BC. A Syrian King named Antiochus invaded the Jewish nation and demanded that my people abandon the God of Israel and His ways. His plan: forced “Hellenization.” That meant imposing Greek customs, including idolatry, on the people. It meant forbidding the practice of the Jewish religion, including circumcision. Ultimately, to ensure that no one could worship the God of Israel, Antiochus defiled the Temple in Jerusalem. He placed idols in the house of the Lord and sacrificed a sow upon the holy altar. He not only defiled God’s Temple, but he took the title “Epiphanes,” which means “God manifested,” and demanded to be worshiped. In response to his blasphemous claim to deity, the Jewish people modified his title, calling him “Epimanes” (crazy).

The Feast of Hanukkah commemorates the victory God gave the Jewish people.

It was a terribly dark period in Israel’s history, but God raised up a small band of heroes led by a family known as the Maccabees (Maccabee means “hammer”). They waged a successful rebellion against Antiochus and drove the Syrians out of Israel. The Feast of Hanukkah commemorates the victory God gave the Jewish people over Antiochus and his mighty army. We call the holiday Hanukkah (dedication), because the high point of our victory was rededicating the Temple in Jerusalem.

Many legends surround this historic event, but the most famous is the “miracle of the oil.” It is said that when the Maccabees recaptured Jerusalem they immediately set out to rededicate the Temple. But they faced a pressing problem; they needed consecrated oil to rekindle the sacred candelabra. They found only enough for one day—and it would take a full eight days to procure enough oil for Temple use.

The thought of lighting this great candelabra only to see it go out again was heart-wrenching. Yet the zeal to rededicate the Temple was so strong that, despite the dilemma, they decided to light the candelabra. A traditional saying arose from this Hanukkah story: “nes gadol haya sham,” which means, “a great miracle happened there.” The great miracle was that the oil, enough for only one day, continued to burn for eight whole days, enough time to make and sanctify new oil. According to this legend, this is why we celebrate Hanukkah for eight nights and why the Hanukkiah (Hanukkah menorah) is lit for eight nights as well. It’s a good story, but it isn’t mentioned in the earlier accounts of the Maccabbeean revolt, such as 2nd Maccabees. The legend of the oil isn’t mentioned until much later, in the Talmud. Maybe a day’s worth of oil supernaturally burned for eight days and maybe it did not.

Many believe that a more likely reason why we celebrate Hanukkah for eight days is that the Maccabees, upon recapturing Jerusalem, conducted a belated Feast of Tabernacles celebration. Remember, Solomon himself had chosen that very same Feast of Tabernacles to dedicate the Temple when it was newly built. So the eight-day festival of joy and thanksgiving would have been an especially appropriate way to commemorate the rededication of the Temple.

In any case, it is still appropriate at Hanukkah to say, “nes gadol haya sham, a great miracle happened there.” The miracle of Hanukkah is the miracle of God’s preserving power. Israel’s victory over Antiochus and his mighty army showed forth that miraculous power.

God staked His reputation on His promises to Abraham, Isaac and Jacob when He vowed to preserve and sustain their descendants forever. No wonder Satan has attempted to annihilate the Jews throughout history! Antiochus was one of Satan’s agents in his diabolical scheme to destroy the Jews and so make God a liar! In fact, the prophet Daniel predicted the wicked deeds of Antiochus (Daniel 8–11) and even depicted him as a type of the anti-Christ, the beast of Revelation 13.

Jesus at the Temple on Hanukkah

The Jews of Jesus’ day were well aware of the events that had led to the Feast of Dedication when they approached Him in the holy Temple on Hanukkah. It was in the context of that recent history that they said to Jesus, “If you are the Christ, tell us plainly” (John 10:24). If Jesus really was the Messiah they reasoned, He had the power to preserve the Jewish people from the tyranny of the Romans, just as God had preserved them from evil Antiochus. Jesus answered them with a rebuke, “I told you, and you do not believe” (v.25).

Jesus boldly asserted His Messiahship. He claimed divine power to preserve and sustain His people, but not in the manner they had hoped for and expected. “My sheep hear My voice, and I know them, and they follow Me. And I give them eternal life, and they shall never perish; neither shall anyone snatch them out of My hand” (v.27–28). Jesus’ power to preserve was not a temporal, physical power. It was eternal and spiritual—and it was based on faith in Him as the Holy One of God. The salvation He offered was not from Roman oppression but from the oppression of Satan, sin and even death itself.

The rededication of the Temple was a reminder of God’s power to keep His promises and preserve His people Israel. But One greater than the Temple stood on Solomon’s porch that day. And He made an astounding claim. “I and My Father are one” (v.30). Remember, this is Hanukkah. Fresh in my people’s minds was the fact that they had rightly rejected the false claims of Antiochus. Now here is Jesus, standing in the Temple asserting His own claim to deity. The reaction of my people was predictable. “Then the Jews took up stones again to stone Him” (v.31). And if He hadn’t been who He claimed to be, they would have been absolutely right to do so.

The Miracle of Immanuel

When my people rejected Antiochus, God kept His promises, miraculously preserving them. But when the Jewish leaders wrongly rejected Jesus’ claims that day, they missed an even greater miracle than Israel’s against-all-odds victory over the overwhelming Syrian army. They missed the miracle of Immanuel, God with us. That miracle gave Jesus the right to claim power to preserve those who come to Him. Only as God come in the flesh is Jesus “able to save to the uttermost those who come to God through Him.”

God does keep His promises, even when we fail to recognize it. He said, “Behold, the virgin shall conceive and bear a Son, and shall call His name Immanuel. For unto us a Child is born, unto us a Son is given; and the government will be upon His shoulder. And His name will be called Wonderful Counselor, Mighty God, Everlasting Father, Prince of Peace” (Isaiah 7:14; 9:6). Jesus fulfilled these precious promises from God. In Him, God has proven His faithfulness to Israel and to all the world.

Because God keeps His promises, He will save and sustain Israel… and all those who call upon His name through faith in Immanuel.

This content has been adapted from an earlier Jews for Jesus article.

When Jesus Was Really Born