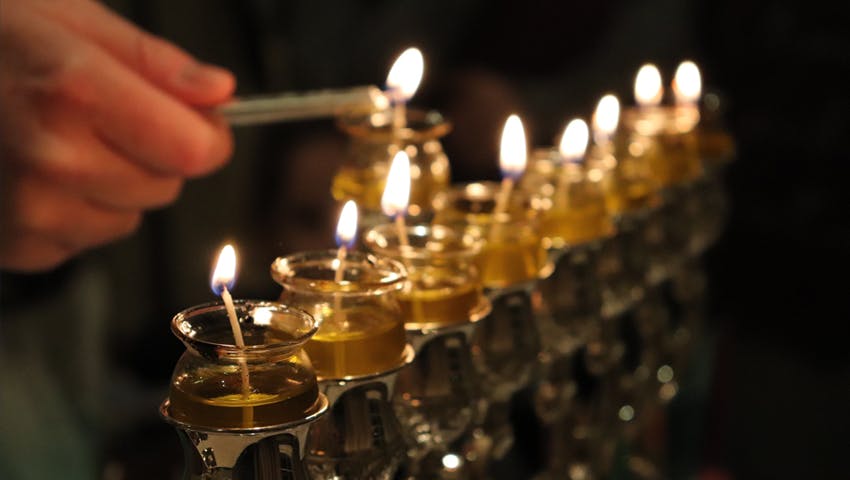 That’s right, without Hanukkah there would be no Christmas. Yet Hanukkah, also known as the “Feast of Dedication” or the “Festival of Lights,” is not among the holidays God commanded Israel to celebrate in the Old Testament. In fact, you will only find one mention of the holiday in the Bible: “Now it was the Feast of Dedication in Jerusalem, and it was winter. And Jesus walked in the Temple, in Solomon’s porch.” (John 10:22-23)

Jesus chose to be in the Temple during this festival. The startling statement He made there is best understood against the background of this feast.

The Story of Hanukkah

Hanukkah commemorates events that took place during the inter-testamental period, that gap between the Old and New Testaments. The Jewish people were under foreign domination, ruled by the Syrian king Antiochus, who forced them to abandon their culture and religion. He made sure the Jewish people could not use the Temple to worship our God. He erected idols in the holy place—and worst of all, he sacrificed a pig on the altar.

The Jewish people were utterly defeated and demoralized—until a small band of guerilla soldiers known as the Maccabees rekindled their hope. Within three years, these warriors miraculously recaptured Jerusalem and the Temple.

Note that Hanukkah—which means dedication—was not named for the brave warriors. The real victory was being able to worship the God of Israel once again. The Temple was rededicated on the 25th day of the Jewish month of Kislev, in the year 165 BC. (This year the 25th of Kislev corresponds to November 29.)

The Miracles of Hanukkah

A common Hebrew phrase connected with Hanukkah is “nes gadol haya sham,” which means, “A great miracle happened there.” Two miracles plus a common theme link Hanukkah and Christmas in a way I hope will heighten your appreciation of both.

Whenever you are tempted to doubt God’s saving power in your life, remember the miracle of His saving power as seen through Hanukkah, and how the small band of soldiers prevailed despite all odds. The way God preserved His people Israel reflects the way He continues keeping all of us, Jews and Gentiles, who trust in Him today.

The second miracle associated with Hanukkah is the miracle of light, a tradition first mentioned in the Talmud—written hundreds of years after the events. According to this tradition, the menorah—the seven-branched candelabra that was to burn continually in the Temple—had been extinguished by Antiochus’ henchmen. When the Maccabees recaptured the Temple they cleansed it and searched for fresh oil to rekindle the sacred flame. But they discovered only enough to last one day—and it would take eight full days to procure fresh oil. According to tradition, in their zeal to rededicate the Temple they used what oil they had to rekindle the flame—and miraculously, it lasted for eight whole days.

According to this tradition, that is why we celebrate Hanukkah for eight nights, and why we use a special Hanukkiah, or nine-branched candelabra. The shamash or “servant” candle is lit first, and in turn it lights all the other candles, beginning with one candle on the first night. Each night, another candle is lit, until the eighth night, when the entire Hanukkiah is aglow.

A Little-Known Explanation of the Eight Days of Hanukkah

The book of Maccabees gives another explanation for why Hanukkah lasts eight days. The people rededicated the Temple during the Feast of Tabernacles (an eight-day holiday which would have been observed the previous month had the Syrians not occupied the Temple). King Solomon chose to dedicate the Temple during the Feast of Tabernacles (2 Chronicles 6 and 7) so it makes sense that the people would wish to do the same.

The Jewish historian Josephus referred to Hanukkah as the Festival of Light, but light was also a big part of the Feast of Tabernacles celebration. Four giant candelabras—each holding four huge bowls of oil—were lit in the Court of the Women. The blaze from these 16 flames could be seen all around Jerusalem. How appropriate it was that Jesus chose this area of the Temple to declare, “I am the light of the world. He that follows Me shall not walk in darkness, but have the light of life” (John 8:12).

What Christmas and Hanukkah Have in Common

Jesus, like the servant candle on the Hannukiah, lights our way, and sends His Spirit to ignite us as well, so that we can shine His light in a dark world. We do not have enough “oil” to live a life dedicated to God, but Jesus has miraculously provided for us.

So the miracle of preservation made Christmas possible, and the miracle of the light reminds us of Jesus, whose advent the prophets predicted would be, “a light to the Gentiles” whose salvation would reach “to the ends of the earth” (Isaiah 49:6).

Finally, the common theme that links Hanukkah and Christmas is that of God with us—Immanuel. A traditional Hanukkah hymn declares to God: “Rock of Ages, let our song praise thy saving power; thou admidst the raging foes wast our sheltering tower; furious they assailed us but thine arm availed us; and thy word broke their sword when our own strength failed us.”

God was present with His people in a way that pulled the rug right out from under the evil Syrian king. When Antiochus entered into the Temple to defile it, he declared himself Antiochus “Epiphanes” meaning “God manifest.” The Jewish nation rejected his outrageous, counterfeit claim to deity.

Counterfeit because God had promised to be present with His people, not only in a miraculous military victory, but in flesh. He promised to actually be what Antiochus, in his insanity, had claimed—the incarnate God. This promise was wrapped up in the special name by which the prophet Isaiah predicted the Messiah would be known: “Behold the virgin shall conceive and bear a Son, and shall call His name Immanuel” (Isaiah 7:14).

How poignant it is that Jesus chose the Festival of Dedication to stand in the Temple, in the portico of Solomon, and declare, “I and my Father are one” (John 10:30). Is it coincidence that Jesus chose this time and place to reveal His deity?

John tells us that in response to His claims the Jewish leaders “took up stones again to stone Him” (John 10:31). They accused Him of blasphemy, “because You, being a Man make Yourself God” (v.33).

Here’s an interesting aside going back to the original Hanukkah celebration. Before the Temple could be rededicated, we needed a new altar built with clean stones. But what about the stones from the old altar? They had been washed of course, but could they ever be considered clean, being porous as they were? According to tradition, these stones were stored in the portico of Solomon, until such time as the Messiah would come and explain what to do with them.

Could it be that when those Jewish leaders looked around the portico of Solomon for stones to throw at Messiah Jesus they reached for those very pieces of that old altar? What divine irony—to hurl a symbol of the sacrificial system at the One who was about to sacrifice Himself for us all.

It is only because Jesus is Immanuel, God with us, that He could sacrifice Himself as an atonement for our sin. He was born to die and rise victorious, born to light our way and make us to be lights, born to be adored by Jews and Gentiles who will bow and worship the One who is the hope of Hanukkah and the Christ of Christmas. These two holidays share their ultimate significance in the person of Yeshua (Jesus) the Messiah. He truly is our Rock of Ages.

The Messiah Would Be Born of a Virgin