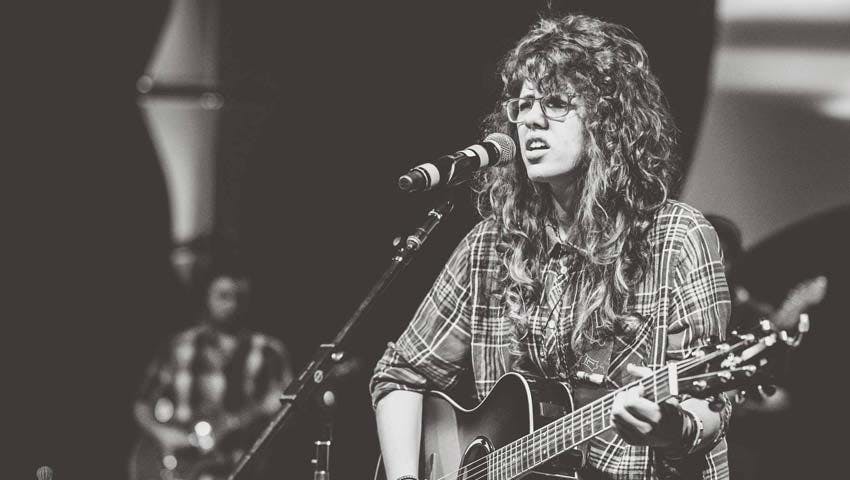 An Interview with Shai Sol Hever

Shai Sol Hever, a 21-year-old Messianic Jewish singer from Ashdod, Israel, caught the public’s eye in late 2014 with her audition for The Next Star (HaKochav Haba) television show (the equivalent of the U.S. show, American Idol.) The judges loved her unique style, and she made it to the second round. Shai caused a big stir in her pre-performance interview when she said, “Something I’m putting out there is that I’m a Messianic Jew.” When the host asked her, “What does that mean?” Shai replied, “Jews that believe in the Tanakh (Hebrew Scriptures) and the Brit Hadashah (New Testament).”

Here is our ISSUES interview with Shai:

Tell me about your family.

I was born in Ashdod, where I have lived my entire life. Both my parents are sabras. I am an only child. My mother is an artist, a painter and a believer in Yeshua (Jesus). My father is a lawyer. We have a small extended family, and most of them don’t talk to us because of our faith.

Did you have a religious upbringing?

My mother sent me to a religious school because she wanted me to learn the Tanakh. I was raised in a traditional Jewish household, not religious (Orthodox). We celebrated the holidays. My mother raised me believing in Yeshua and taught me about God and how to talk to Him. So all of my life I knew who Yeshua was, our Messiah, but only at sixteen did I really understand what Yeshua had done for me and receive him into my life.

Did that change your life?

The change was that I left my old life behind. God spoke to me and said, “You can’t worship two gods. It’s a life with Yeshua or a life in the world.” I left all those things from the past and started getting more involved with the congregation and joined the worship team and realized that the most important thing is to be in the will of the Lord and not just doing what I want.

I understand that you began learning percussion at age six. Can you tell me about your musical background and development?

On my sixth birthday my mother took me to a music store, and I told her I wanted a darbuka (a Turkish hand drum). From that point on, I started to drum. Earlier that day we had received a visit from a debt collector. We didn’t have any money and we had a lot of debt. They took all our things from our home. What I had left was my darbuka. My mother told me, “You have your music, and nobody can take that away from you.” That’s something that has stayed with me, and I haven’t stopped playing. Each year I learned a different instrument—piano, guitar, percussion instruments, bongos, congas until I started to sing and started writing music. That was at age sixteen, when I began to follow Yeshua. This all comes from the inside, from God.

How did you get the opportunity to audition for The Next Star television show?

I went with my band, a trio of girls. We had an argument and broke up. Then one of the producers of the show asked me if I wanted to continue by myself. I said yes. I thought, maybe this is a chance from God to try this out by myself so I can speak about Yeshua.

In your pre-audition interview for the show, you revealed that you believe in Yeshua. What kind of reaction did you receive after the show was televised on prime time?

There were a lot of comments, like “You’re a gentile”, “Christian!”, “You’re a missionary.” But some people were saying, “Wait, what is a Messianic Jew? We don’t know what it means.” There were two sides to the comments, but I believe that people were very open and wanted to hear.

What about the media?

Well, it was the first time that anyone has ever said something like this on television. People were encouraged, because we should be able to speak freely. It’s nothing to be embarrassed about.

How did you feel about all of this?

I didn’t think it was that big of a deal, really. I thought this was normal. I think it was really something organized by God.

Did you continue to speak about Yeshua during your advancement in the competition?

I think that they put it up, people heard it, and it got “buzz.” But after the buzz ended, there wasn’t any other interest.

Who are your musical influences?

One is Aviatar Banai, a singer who was an agnostic, but then returned to faith, and now he has a lot of songs about faith and God. I really feel the spirit of the Lord when he sings.

I understand that you’re working on an album of original songs. When is it scheduled to be released? What kind of songs are on the album?

Before the TV show, I was already starting to work on the album. But just before the show we decided to take a break. We’re now again working on producing the album. It consists of twelve songs I have written about my life and my faith. I believe it will be ready in the next couple of months.

Do you have a job in addition to your work as a musician ?

I’m an instructor at a daycare and a caretaker for autistic children. I also teach music there. Kids come after school to do homework, eat, play and learn. I work with children who have mild mental disabilities, Down’s syndrome and autism. They really love music. They are like siblings, amazing kids. I love them and love working with them.

What are your future plans?

I want to continue with music in a way that will be blessed by God, that people would learn about the Jewish aspect of my faith.