The title of the film is Composing the Scriptures, and it’s a three-minute video that we created as the first in a series of animated films for our upcoming Hebrew website. We wanted to convey that the Spirit of God inspired our Scriptures. We wanted our audience to consider the fact that even though it’s an ancient text, Scripture is trustworthy and can be read, understood, and appreciated by modern readers.

Eli Birnbaum, who directs our Israel work, and team member Tamir Kugman wrote the script, and I did the design and animation. We depicted the writers of the Bible as musicians in an orchestra with God as “The Conductor” above all. (Above you can see Eli holding the certificate of award, along with Tamir and me, and below is a frame from the video). 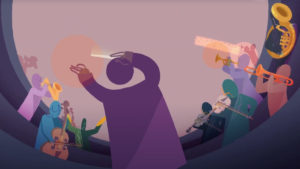 We didn’t create the film to compete in the festival, but when we completed the film, we realized it was just before the deadline of the ASIF Festival (the main Israeli Animation Festival). So, we decided to submit it.

It was chosen to compete for the prize in its category (loosely translated, “commissioned films”), which meant that everyone watching the festival saw it. Out of approximately 50 submissions in every category, the five best are chosen to compete for first prize, as well as one honorable mention. We received the honorable mention, and honestly, I was caught off guard. I wasn’t expecting the award or to be invited on the stage, so I hadn’t planned any acceptance speech. But I remember I said something like, “I’d like to thank the Jews for Jesus organization for making this project possible. And of course, to thank the star of the film—the ‘Great Composer’ over us all.”

And if that weren’t enough, our film was chosen to be screened in the program, “Best of ASIF,” which means even more people will see it. Please pray that many will respond with a desire to read God’s Word.

We are so thankful for your partnership in this work, and we invite you to praise God with us for how He is moving. We see the recent events as a confirmation that we’re on the right path towards creating artistic content that appeals to a modern Israeli audience, so that more Jewish people will see how truly relevant the good news of Jesus is.

You Are Reaching Jerusalem for Jesus!

Sharing the Word with Jewish People This Christmas

Chat with us anonymously!

Chat with us anonymously!

What brings you here today?