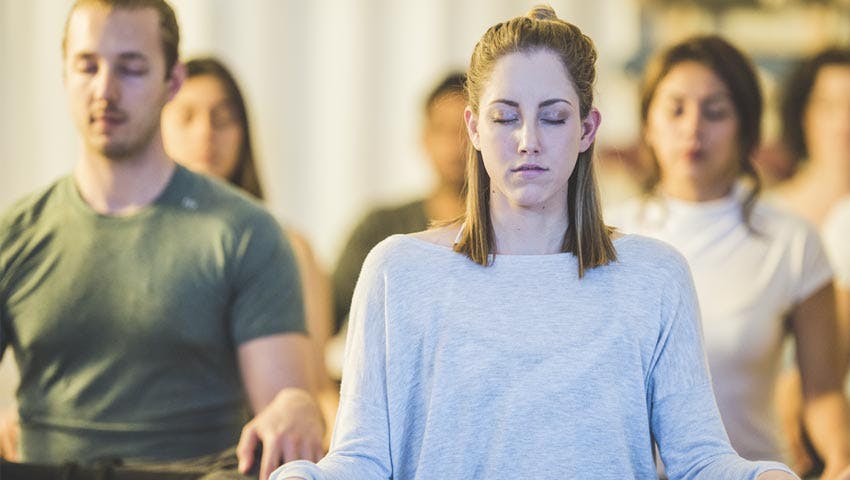 The practice of mindfulness is a popular therapeutic method to help practitioners become more present in the moment and more aware of their intentions, thoughts, breathing patterns, and bodily reactions. It’s quickly replacing traditional modes of relaxation across all walks of life and promotes inner calmness through a technique called meditation. Meditation is simply giving our full attention to the current moment to achieve a mentally clear state of mind.

Jewish Mindfulness is a movement that certainly isn’t new, but is becoming more mainstream and relevant in the West as we look for ways to quiet modern distractions and connect more fully with God. The Institute for Jewish Spirituality explains that mindfulness enlivens “Jewish prayer, celebration ritual and community”; works toward bettering the planet; and enables participants to find “deep sources of happiness in a world filled with… unsatisfying short-term fixes.”1

The term mindfulness was introduced to the English language in the late 1800s by British Indian scholar Thomas Rhys Davids as a translation of the Pali word sati. Sati appears in Indian Buddhist texts describing the seventh of the eight-fold path to enlightenment.2 Davids translated sati as right mindfulness.3

By the late 1970s, Buddhism held an attraction for Jewish-Americans, many of whom were non-practicing or disaffected from Judaism. Rodger Kamenetz coined the term Jubu in his work The Jew in the Lotus, describing those who hold onto their Jewish identity while embracing Buddhist meditative practices such as mindfulness.4

Poet Allen Ginsberg popularized the image of the Jewish-Buddhist as one who proudly espoused his Jewish identity while embracing Buddhist practices such as mindful meditation.5 The practices of mindfulness and meditation became popular within the Jewish Renewal Movement and were adopted by Kabbalistic sects such as the Kabbalah Centre.

But Jewish meditation has its roots in Medieval Jewish mysticism and predates the East-meets-West cultural trend.

Meditation in Judaism grew around the synagogue liturgy and study of Torah. Prayers, such as the Amidah and the Shema, were intended to be recited meditatively. “The Talmud… says that the [sages] spent an hour reciting the Amidah… [describing] a meditative rather than a worship experience.”6 During the recitation of the Shema, for example, it is customary to sit down, bow the head, and place hands over the eyes in order to intently concentrate upon the words of this sacred prayer.

Jewish law requires a greater measure of kavanah [mindfulness] when saying the first verse of the Shema. The need for this higher degree of kavanah has led to the custom of closing one’s eyes or covering them with one’s hand when reciting it. This is to eliminate every distraction and to help one concentrate on the meaning of what is being said.7

What does Jewish meditation involve?

The Three Pillars of Jewish Meditation

Jewish meditation developed within the context of mysticism known as Kabbalah [received tradition]. Kabbalah emerged in the Middle Ages out of texts such as the Sefer Yetzirah (Book of Creation), Heykhaloth Rabbatai (Book of the Divine Chambers), and The Zohar. Kabbalah focused on hidden interpretations of Torah. In Kabbalistic meditation, participants focused their attention on Hebrew phrases, letters, and metaphysical concepts such as the primordial ten sefirot. However, Kabbalah was primarily an academic discipline practiced by Jewish mystics.10 In the eighteenth century, Kabbalah was popularized by the Baal Shem Tov (1698–1760) who founded the Hasidic movement in Eastern Europe. “The Chasidic movement… was based on mysticism, and meditative exercises were central to the movement. An important early Chasidic technique involved using the daily service as a meditative exercise.”11 Nineteenth century Jewish scholars in Germany took an intellectual interest in Hasidic mysticism. Martin Buber, who translated many of the Hasidic texts into German and later English, is credited with bringing Jewish mystical thought to the West.12

Meditation was practiced in the study of Torah, prayer, and practice of mitzvot.

Meditation was practiced in the study of Torah, prayer, and practice of mitzvot. Mindfulness as kavanah was understood as part of the meditation process but perhaps differently than its Eastern counterpart. As meditation became popular within the Jewish Renewal Movement in the 1970s, Kabbalistic practices merged with those borrowed from Buddhist traditions. Writers such as Alan Lew, Sylvia Borstein, Zalman Schachter-Shalomi, and Aryeh Kaplan introduced mindfulness to mainstream Judaism through their publications and public lectures. By the 1990s, meditation became familiar to mainstream Judaism.

The cantor of a suburban Reform synagogue describes how she introduced mindfulness to her synagogue, and how it was enthusiastically received:

While serving for 13 years as the cantor of a suburban New Jersey congregation, I created a weekly Jewish Mindfulness Meditation group within the context of our lifelong learning program. Members of other local synagogues were invited to join our sessions…. All these people clearly were seeking something different and something Jewish…. Today, the group continues to meet almost weekly.13

So… how Jewish is it?

True Jewish meditation should revolve around the Torah – God’s Word to us. To learn more, read my other article, “Finding Mindfulness in the Jewish Scriptures.”

4. Rodger Kamenetz, The Jew in the Lotus: A Poet’s Rediscovery of Jewish Identity in Buddhist India (New York, NY: HarperOne, 1994).

The Truth About Jewish Mysticism

A History of the Kabbalah