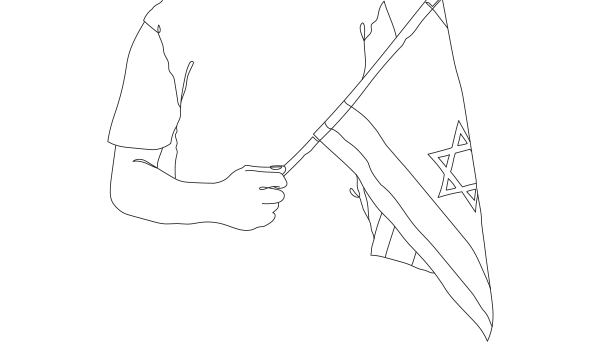 “To everything there is a season, and a time to every purpose under heaven,” the preacher tells us in Ecclesiastes. “A time to weep, and a time to laugh; a time to mourn, and a time to dance” (Ecclesiastes 3:1,4). As evidenced by other Jewish holidays, mourning and joy are often commingled; at the same time, the soul craves appointed times for these outpourings of emotion. This desire for order has shaped the two-day period in Iyyar when Yom Hazikaron (Remembrance Day) and Yom HaAtzma’ut (Independence Day) take place. The two holidays, which formerly shared the same date and now take place in succession, signify the link between soldierly sacrifice and the formation of the modern state of Israel. The demarcation of these two holidays allows for mourning and joy to each have an appointed time.

On Yom Hazikaron, Israelis take time to appreciate the gravity of the sacrifice made by the country’s soldiers, police, and defenders; much like American Memorial or Veterans Days, the holiday is a solemn commemoration of the 23,544 fallen soldiers who gave their all for the state of Israel from 1860 to 2016.

Commemorations of fallen soldiers were celebrated on Yom HaAtzma’ut in 1949 and 1950. However, “the combination between the grief of mourning and the happiness of independence created an emotionally difficult atmosphere.”1 Families of the fallen were dismayed at the coexistence of these two holidays on the same calendar date. To respond to this difficulty, “In January 1951, Minister of Defense David Ben-Gurion established the Public Council for Soldiers’ Commemoration… The council recommended that the 4th of Iyyar… become the ‘General Memorial Day for the Heroes of the War of Independence.’ This suggestion was approved by the government for marking the third Memorial Day.”2 The Knesset’s official designation of Iyyar 4 as Yom Hazikaron was signed into law with the Heroes’ Remembrance Day (War of Independence and Israel Defense Army) Law in 1963.3

A subsequent amendment to the Law in 1980 officially redesignated Yom Hazikaron “Memorial Day for the Fallen of Israel’s Wars Law,” to include those who fell in the field of battle before the War of Independence, along with others who perished in defense of Israel (e.g., police, General Security Service, and the Mossad or secret intelligence agency).

How Yom Hazikaron Is Observed

Yom Hazikaron is accompanied by solemn military and governmental ceremonies. According to the Encyclopaedia Judaica,

Memorial candles are lit in army camps, schools, synagogues, and public places, and flags are flown at half-mast. Throughout the day ex-servicemen and soldiers serve as guards of honor at war memorials in all towns and villages, and the families of the fallen participate in memorial ceremonies at military cemeteries. By law, all places of entertainment are closed on the eve of Yom ha-Zikkaron, and broadcasting and educational bodies are required to stress the solemnity of the day.4

Like Yom HaAtzma’ut, Yom Hazikaron does not have an obligatory order of service. However, families of fallen soldiers and observant Jews may say prayers for dead soldiers or recite the Mourner’s Kaddish. The Israeli Rabbinate has also prescribed special prayers for the holiday, including Psalm 9 and 144.5

Yom Hazikaron begins at eight o’clock in the evening with the sounding of a siren nationwide. (As a call to attention, the siren in modern Israel bears a certain resemblance of the ancient shofar.) For a full minute all of Israel stops. This national moment of silence is a way of solemnizing the memory of the dead, much like the moment of silence observed on Yom Hashoah (Holocaust Remembrance Day). Another moment of silence takes place on the day of Yom Hazikaron at eleven o’clock in the morning, lasting two minutes. Yom Hazikaron concludes with the lighting of the twelve torches at Mount Herzl in Jerusalem on the second evening, upon which Yom HaAtzma’ut immediately commences.

Aside from these universally observed and official traditions, there are also innumerable candlelighting ceremonies, grave visitations and prayer services for the dead conducted on an individual basis.

Yom Hazikaron in the New Testament

There is no mention of Yom Hazikaron in the New Testament as it is a more recent holiday.

Yom Hazikaron is a state holiday; and although it has no traditionally religious significance for Jews, it is a day to mourn and to pray. The Scripture reminds us to  “rejoice with those who rejoice, and weep with those who weep” (Romans 12:15). On Yom Hazikaron we mourn the many men and women who have died in defense of Israel. We remember our need for a lasting salvation through the Messiah and Son of God, Yeshua, and pray ardently for the redemption of His people Israel. And we remember the words of the psalmist: “Blessed in the sight of the Lord is the death of His saints” (Psalm 116:15).