Preparing for Christ in the Passover

How to Prepare for Christ in the Passover: A Presentation

Thank you for partnering with Jews for Jesus and inviting us to share Christ in the Passover: An Interactive Experience. Just like Jesus sent the disciples to prepare for the Passover, we also need your help to prepare!

The speaker will arrive approximately 45 minutes before the service to set up. Though he or she will bring some items along, we’ll need your help in providing some of the materials the speaker can’t transport! We hope this guide is helpful as you pull together what’s needed.

Unless the room is very small and intimate, make sure the speaker has a microphone, preferably one that is hands-free.

As the speaker talks through and demonstrates the Passover Seder, the significance and origin of communion will be explored. Because of this, you might want to consider serving communion as you conclude the event. If you choose to do so, the hosting pastor or leader should preside over the elements. Feel free to talk over and make these arrangements when your speaker calls to confirm the details of the event. 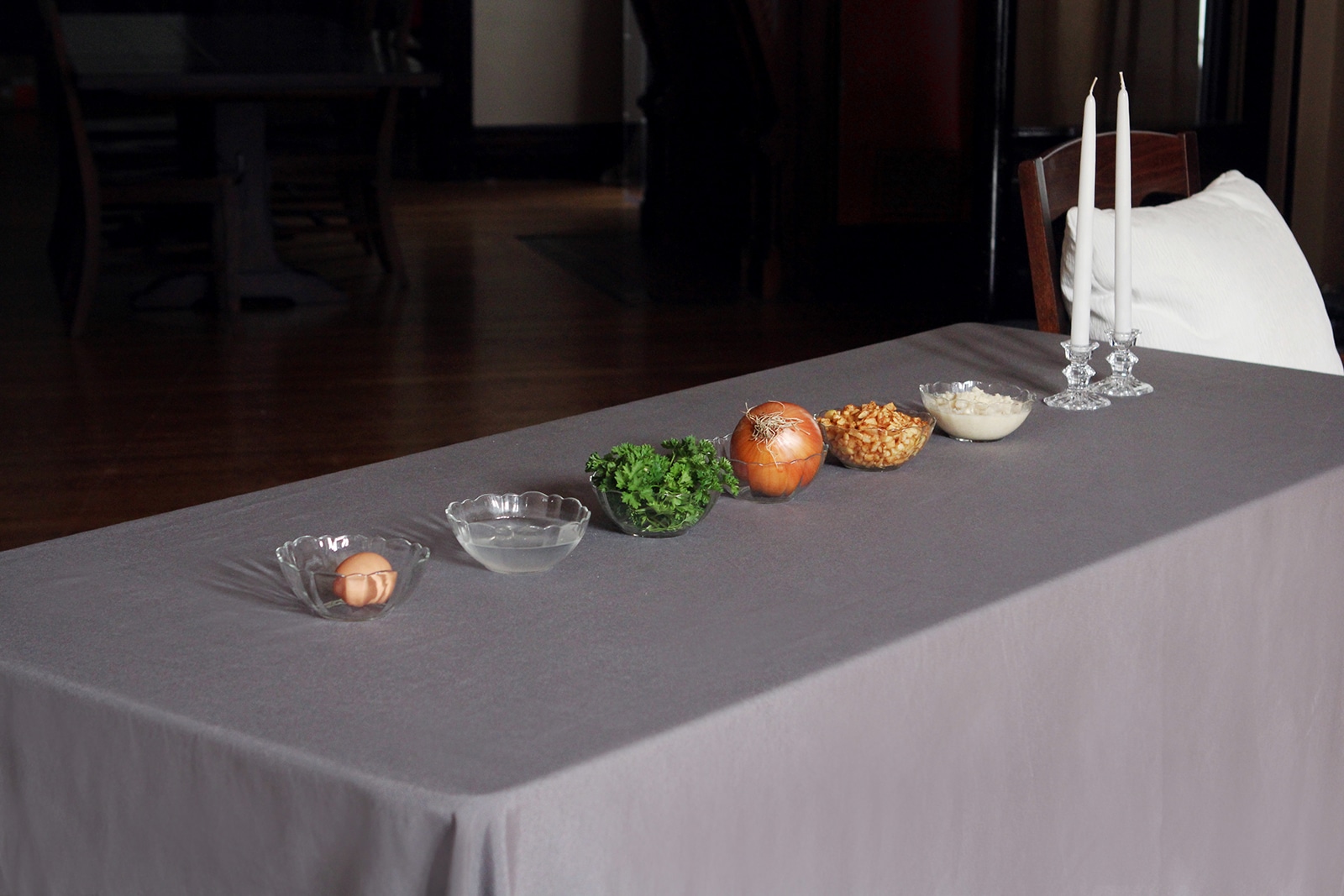 The speaker’s table should be roughly 6 feet in length.
It should be covered in a fabric tablecloth in a solid, neutral color.
Place a sturdy chair at the end of the table and place a pillow in a white pillowcase on it.
On the table, you’ll need two candlesticks in holders and matches to light them. The candles should be tall, like 10 to 12 inches each so everyone can have a clear view of them.
You’ll need six clear bowls on the table, enabling the contents of each to be easily seen.

In the first bowl, you’ll need a hard-boiled egg with a brown shell.

The next bowl will have saltwater. Add enough salt to the water to make it cloudy.

The third bowl is for parsley. Separate the parsley into small sprigs so they are easy to grab and dip.

The fourth bowl should contain an unpeeled onion.

The fifth is charoseth, a sweet apple mixture. To make it, you’ll need 2 tart apples, peeled and cored, 1/2 cup walnuts, 1/4 tsp cinnamon, 1 tsp honey, and 1 tbsp of grape juice or a sweet wine like Manischewitz. Either in a food processor or by hand, chop apples and walnuts into small pieces. Combine with cinnamon, honey, and wine or juice until well blended. A serving size is approximately 1 tbsp, and this should yield 10-12 servings.

The last bowl is for ground horseradish. This is usually sold in a glass jar, available at most large grocery stores, or even here on Amazon.

The table might look a little empty, but don’t worry—the speaker will fill it with other items that he or she will bring along.

You’ll also need a cup and a pitcher of grape juice and/or wine. Provide enough for the leader to refill the cup four times.

Put one large dinner napkin at the table.

Lastly, place a large bowl (like a mixing bowl), a pitcher of water, and a hand towel at the table. This is for the leader to demonstrate the symbolic act of hand washing.

The table might look a little empty, but don’t worry—the speaker will fill it with other items that he or she will bring along.

At the tables for participants, include a plate, fork, and two cups for each guest. One cup is for water and the other is for wine or juice.

Just like the leader’s table, each participant table needs two candles in holders and matches to light them.

Each table will also need the six bowls of the same elements, filled with enough of the ingredients to serve each person sitting at the table. For reference, a single person’s portion would be half a hardboiled egg, one sprig of parsley, 1 tbsp of charoseth, and 1 tbsp of horseradish. You just need enough saltwater for everyone to be able to dip their parsley sprig in it. The onion won’t be eaten—it’s just used as a visual symbol.

You’ll need plain matzo at each table, enough for each person seated at the table to have half a sheet of matzo. It’s available in most large grocery stores, or even on Amazon.

Each table will need grape juice and/or wine. Each participant will refill their glass of juice/wine four times throughout the evening, so we recommend either using smaller cups for the juice/wine or instructing participants to only fill their cup halfway.

Lastly, each table will also need a large bowl (like a mixing bowl), a pitcher of water, and a hand towel for the symbolic act of hand washing.