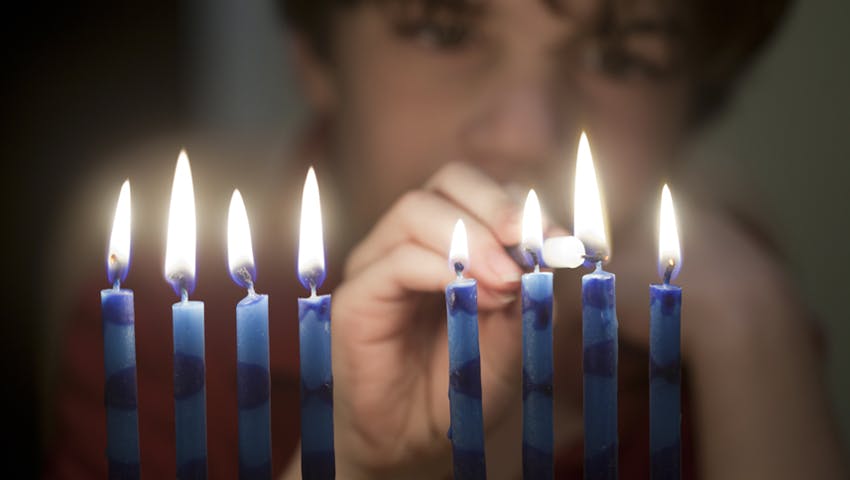 Shammash is a Hebrew word that means servant. In the Jewish community, shammash (also spelled “shammas”) commonly refers to the sexton—the person who manages the synagogue facilities and keeps things running smoothly. In the Middle Ages the term referenced a more prestigious position. The shammash helped to conduct prayer, lead the worship services and even carry out and enforce the judgments of the Jewish community leadership.

So the shammash is more than just a candle, it is the servant light by which all the other candles of Hanukkah receive their light. Because of this, its meaning is transcendent, provoking reflection on the beauty of its light and the meaning of its purpose. That meaning points beyond the simple candle to a special person.

The shammash usually holds a special position on the candelabrum. On some hannukiot (plural of hannukiah), it is raised slightly above the other candles. On others, it is placed below the row of eight, which is the look I prefer. After all, the position of a servant ought to be subservient. And that is where things can get interesting.

Just as the shammash in the synagogue was understood at one time to occupy a more prominent role, so the shammash of Hanukkah can be seen to have greater spiritual significance, made even more profound as we consider the relationship between Hanukkah and Christmas.

Contrary to the lowly or demeaning place servants occupy in many cultures, God elevated the role of servant, and one servant in particular. Scriptures reveal the surpassing significance and prominence of the “servant of the Lord.”  The image of the shammash points directly to this biblical concept. Who is this shammash; who is this “servant of the Lord?”

First, the “servant of the Lord” is a special designation that confirms a unique relationship with God. God refers to people like Job, Abraham, Moses, Joshua and David as “My servant.”  This title indicates a certain intimacy God had with these people, as well as a special calling He had placed on their lives. In today’s culture we don’t often think of the role of servant as a position to aspire to, but to be “the servant of the Lord” in Bible times was a great honor and a high calling.

Second, God uses the term “the servant of the Lord” to refer to the nation of Israel, making numerous references to them as “Jacob my servant,” or “Israel my servant.”  This doesn’t mean that every Jewish person had the same intimate relationship with God that Abraham and Moses and David enjoyed. It does mean that Israel was an elect nation; God had chosen Israel as a people through whom He would accomplish His purposes, regardless of how the individual members of the nation were disposed towards the Lord.

That Israel was and is an elect people and God’s servant was no guarantee that all the people of Israel would serve Him, nor that they would all be in a personal relationship with Him. This is especially important for Christians to understand as we think about the Jewish people today, and each individual’s continuing need for God and for His salvation.

Third, the term servant is used in the Scriptures prophetically to refer to the coming Messiah. For example, the psalmist refers to “My servant David” in Psalm 89, not speaking of David himself, since the Psalm was written after his death, but of David’s greater Son whom God had promised would sit on the throne of Israel forever. This mention of David is none other than a direct reference to the Messiah who was to come. In the same way, Isaiah speaks not only of God’s servant Israel, but also of Israel’s greater son, the Messiah.

It was through this “servant” that God promised to “raise up the tribes of Jacob, and to restore the preserved ones [some translations say ‘elect’] of Israel; I will also give You as a light to the Gentiles that you should be My salvation to the ends of the earth” (Isaiah 49:6). That is a tall order indeed. But the shammash of our hanukkiah reminds us of this promise concerning the Messiah. He would be a light to the nations and God’s salvation for all people.

In fact, Jewish people are instructed to place our hanukkiot prominently in the windows of our homes, visible to all as a sign of our continued faith in the coming of the Messiah. That is why it is so significant in the Gospel accounts that the angel of the Lord instructed Joseph to name the child Jesus or Y’shua, which means “God’s salvation” (Matthew 1:21). That is why Simeon exclaimed, when he first saw the baby Jesus, that He was indeed, “A light to bring revelation to the Gentiles, and the glory of Your people Israel” (Luke 2:32).

Jesus is the servant who was brought low in order that He might become lifted up for all to see. He is the one through whom God’s light would be kindled in the hearts of so many people all around the world. Jesus is God’s shammash, and because He is, so are we. Y’shua told His disciples, “You are the light of the world”  (Matthew 5:14). What do you think that means for us who would follow Him?

The apostle Paul understood this great truth. He explained his calling as apostle to the Gentiles as a direct fulfillment of Isaiah’s prophecy, quoting, “For so the Lord has commanded us: ‘I have set you as a light to the Gentiles, that you should be for salvation to the ends of the earth’” (Acts 13:47).

How stunning that Paul would identify his entire ministry as part of the fulfillment of the prophecy of Isaiah 49—but that is exactly his meaning here. Paul is saying, “I am the shammash, too!”  Might we be so bold?

I gain incredible inspiration from the apostle’s application of this Scripture. I see in it a direct reference to our ministry in Jews for Jesus. We too are the shammash of God.

This month our missionaries are out and about sharing the good news of the Messiah with Jews and Gentiles all around the world. We are handing out tracts in places like Macy’s in New York, Harrod’s of London and at Hamashbir in downtown Jerusalem.

We are inviting people to become reconciled to God through faith in His servant Jesus. Is there a higher calling in life? I think not. But the wonder of it all is that if you know Jesus, He invites you to become His shammash, too. I don’t know what your season of life will entail; where you will travel, with whom you will speak and how you will spend this last month of the year 2012. It seems to me that if we understand the meaning of this special season, we will without a doubt understand a special role for ourselves this holy season. We are the light of the world. We too are called to be God’s shammash.

The Messiah Would Be the Suffering Servant

The Messiah Would Be a Descendant of David