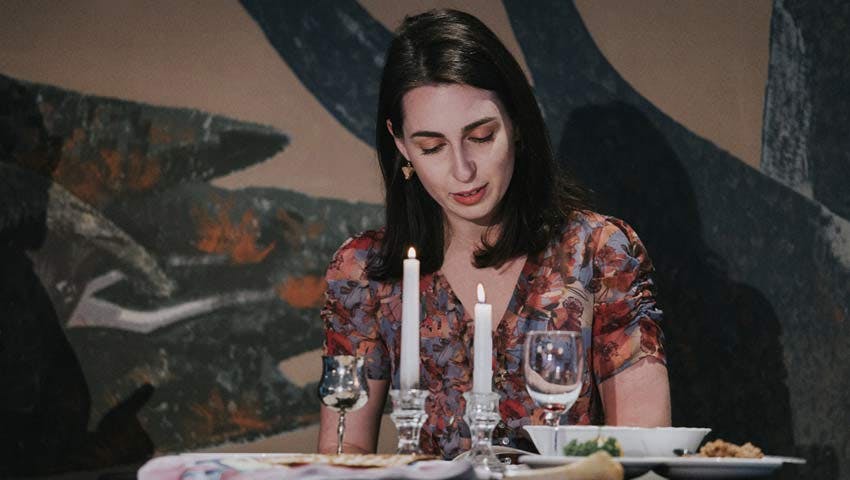 Like most modern Jews living in the diaspora, I’m a little bit of a lot of things. I’m a minister and a sixth-generation Jewish follower of Yeshua (Jesus) as Messiah; I direct Upside Down, a new art space/coffee shop in Los Angeles; and every spring, I lead Passover seders in congregations across America.

I highly value my Jewish identity and culture, and one of the ways I stay connected to these things is by listening to Tablet’s “Unorthodox” podcast. So, this past spring, when the hosts spent the first five minutes of their show in a lively digression about Messianic Jewish seders, I was all ears.

I’ve always respected the way they represent the wide range of thoughts and opinions that comprise Jewish culture today. So I was surprised when the conversation only hit a single note, giving an uncharacteristically one-sided viewpoint of the subject: they accused Messianic Jews of appropriating Jewish culture by celebrating Passover, and of encouraging Christians to do the same.

I was disappointed not only by the narrow and unbalanced viewpoint, but also because it reminded me of the many times I’d heard it from others before.

Appropriation is a serious offense; it shouldn’t be a claim leveled lightly.

Appropriation is a serious offense; it shouldn’t be a claim leveled lightly, and it shouldn’t be an act addressed lightly. It makes sense that some members within the Jewish community are tempted to make this accusation; having endured as much persecution as we have, the Jewish people need to be vigilant when it comes to safeguarding our continued survival.

But is celebration of Jewish holidays by Messianic Jews really an act of appropriation? And is it inappropriate for Gentiles to participate in such celebrations?

As a Messianic Jew, I’ve made a conscious decision to continue to be authentically engaged with my own culture rather than pretend I’m no longer Jewish. I’m fully aware that some Jewish community leaders claim that as soon as a person is baptized, they become outsiders. But I join many Jewish people throughout history in questioning the legitimacy of any authority within Judaism that would draw a boundary marker to exclude those who claim Jesus as Messiah.

Jewish holidays were a key part of my childhood and celebrating Passover is a central part of my family’s heritage. God told the Jewish people as we were leaving Egypt that it would be a feast to observe throughout all our generations. Why would that change just because I believe the Messiah has come and is returning (like some ultra-Orthodox Jews also believe, I might note)?

Believing in Yeshua doesn’t change my desire to celebrate these holidays – if anything, it strengthens that desire. After all, if he taught about and celebrated Passover, observing all three of Rabbi Gamliel’s key elements (the Passover offering, matzah, and maror), why would it be inappropriate for followers of Yeshua to continue in the footsteps of their spiritual teacher?

It is a reasonable fear that leading a Passover presentation or hosting a Shabbat dinner for a Gentile audience could play into a romanticized fascination some Christians may have with Judaism.

This is a particularly insidious form of antisemitism.

Sometimes this can go too far – like when non-Jewish followers of Jesus start to think of themselves as “the new Israel,” a dangerous mentality that, in extreme cases, has even led to bloodshed (as it did in Poway this year).1 This is a particularly insidious form of antisemitism, and as someone with both a Jewish and a Christian identity, I find it especially repulsive – a gross manipulation of the Christian faith.

But here’s the thing: Christians can enjoy Passover, or any other Jewish holiday, without it being weird. When you’re not Japanese but you go to a sushi restaurant and enjoy a great meal, is it weird? Of course not. But if you call yourself Japanese because you like sushi, that’s definitely weird.

How Do We Ensure Appreciation Doesn’t Turn into Appropriation?

When I teach Christians about Passover, the danger of appropriation is never far from my mind. In reality, non-Jewish Christians have a responsibility to learn about the traditions associated with the roots of their own faith, to understand the context of the Scriptures, and to recognize the value of their religious heritage without feeling the need to co-opt the history and identity of the Jewish people.

The difference lies mainly in education, and the best way to ensure that Gentile appreciation doesn’t veer into unhealthy territory is for us to offer these cultural experiences ourselves. When people have the opportunity to experience another culture with someone from that culture, they can be shown how to appreciate it in a healthy way. It’s a fine line, but it’s one that needs to be approached.

Educating Christians on traditional Jewish rituals and cultural celebrations can play an important role in the ongoing battle against antisemitism in the world today.

Is Christianity Itself Just One Big Appropriation?

Some followers of Judaism view the entirety of Christianity as a glaring example of cultural appropriation. This is often because of the belief that the New Testament is simply a Gentile addition to the Tanakh.

In actuality, it’s quite the opposite. The texts of the New Testament were written by Jews, inspired by the God of Israel, and later embraced by the goyim, just as the Torah predicted would happen: “It shall come to pass in the latter days that the mountain of the house of the Lord shall be established as the highest of the mountains… peoples shall flow to it, and many nations shall come, and say: ‘Come, let us go up to the mountain of the Lord, to the house of the God of Jacob, that he may teach us his ways and that we may walk in his paths.’ For out of Zion shall go forth the law, and the word of the Lord from Jerusalem” (Micah 4:1–2).

What makes the New Testament so powerful is that it opens the boundary lines of what it means to be a people belonging to God. It enables the Torah to apply to everyone and offers the opportunity to follow the God of Israel from within the context of their own heritage. Like all great literature, the New Testament transcends cultural boundaries, and people of all languages and backgrounds have found its words relevant to their own experiences.

But in this beautiful inclusion, the root cannot be forgotten. In the New Testament itself, Gentile followers of Yeshua are warned not to show arrogance toward the “root” of the faith and its “branches,” the Jewish people (Romans 11:18). It’s imperative that the source of the Scriptures not be lost, that its readers give proper respect and weight to the historical context and intent of the authors.

When a gunman entered the Chabad synagogue in Poway because he believed he was a part of “the new Israel,” I knew I had a different answer.

Other Jewish people sometimes ask me why I host seders in churches for Christians. I used to have a pretty basic answer to this question, but when a gunman entered the Chabad synagogue in Poway, California and stole precious life because he believed he was a part of “the new Israel,” I knew I had a different answer: I host seders, so Christians can understand that the root of the Jewish people sustains them. Without that root, the grafted-in branches would waste away.

So whether it’s a Shabbat dinner, a Hanukkah party, or a Passover seder, I’d suggest we take these opportunities not to draw thicker boundary lines or build higher walls, but to invite those around us to engage with our beautiful heritage in a deep and meaningful way, building and protecting the future of the Jewish people.

1. Julie Zauzmer, “The Alleged Synagogue Shooter Was A Churchgoer Who Talked Christian Theology, Raising Tough Questions For Evangelical Pastors,” The Washington Post, May 1, 2019.

Passing on Jewish Heritage in an Intermarried World