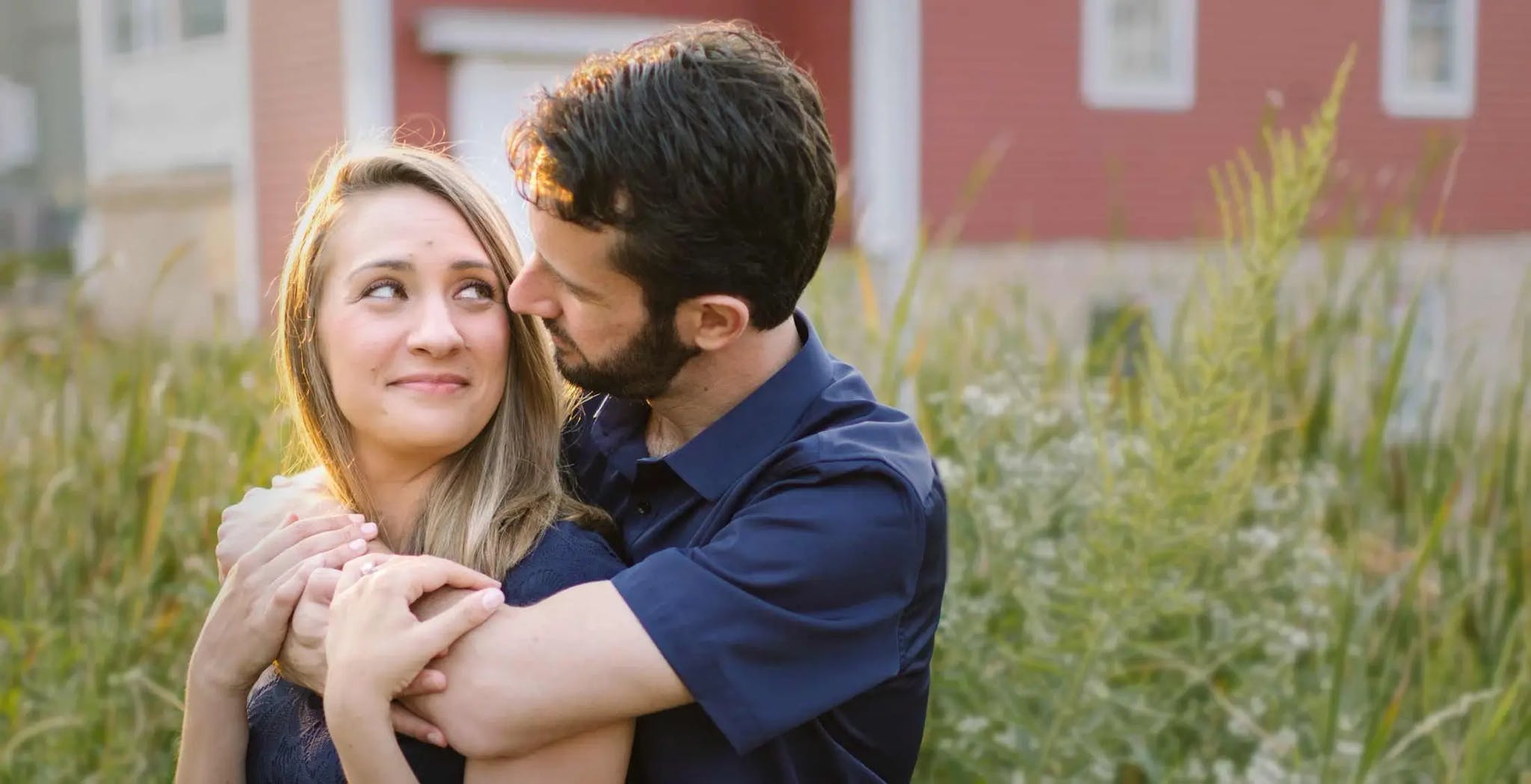 I was spooning out some cholent when the rebbetzin at the university Chabad house asked me a very direct question: “So do you plan on marrying Taylor?”

I couldn’t help but be amused by the timing of her bluntness. Just a week earlier, I had showed up to Shabbat dinner with my red-haired, Gentile boyfriend, and his level of discomfort made me realize that he wouldn’t make the best partner as I was pursuing my personal expression of Judaism. I told her I was pretty sure it wasn’t going to work.

Unfamiliar with the Chabad movement, I asked how dating was handled in her community. She told me that when you’re ready to find a spouse, your family and friends compile a list of potential matches for you and you begin meeting them. However, if the woman didn’t want the match, it didn’t happen. “It’s very important you be attracted to your husband,” she told me. I smiled and nodded in acknowledgement, but inside, I actually felt a bit of resentment.

My relationship record had consisted of awkward one-off dates with various acquaintances.

I’d never had good luck in romantic relationships—in fact, I’d barely had one by that point in my life. Of course, there was the on-again, off-again camp boyfriend throughout high school, and the brief romance with an Israeli soldier when I was eighteen. But other than that, my relationship record had consisted of awkward one-off dates with various acquaintances from class or the campus dining hall. Finding a guy who was the right fit was hard, especially as a Jewish person who believes in Jesus. The rebbetzin’s dating method sounded so nice—after being so isolated and unsuccessful in my own dating experience, the idea of having a loving community help and encourage me in my search sounded so refreshing. While there was a lot I admired and enjoyed about the Chabad community, I wondered if there was a way to tap into their sage wisdom without having to become Orthodox myself.

Eight years later, my love life hadn’t gotten much better. I’d been on countless dates and they were duds. On one particularly horrible date, I excused myself to the bathroom to have a moment to recover and text my friend, “Worst date ever.” I sighed and lamented, “So, this is 29.” I’d been dating intentionally, focusing on people from my community and on those who shared my values, but to no avail. I was completely and utterly discouraged and depressed. It was hard not to take my lack of success as a reflection of my value. As long as I could remember, I’d always wanted a partner and a family. There’s no way this was how it was meant to be.

I wasn’t the only one feeling these frustrations. According to a recent survey, “54 percent of women felt dating burnout from looking for a partner.”1 How did everyone else find the right person before burning out?

As I was in that bathroom stall questioning my life choices, I remembered the story my mom and grandmother used to tell me about my great-grandparents. At a wedding in New York in 1902, my great-grandfather noticed my great-grandmother, and got in touch with her family to express his interest in her. The two had an arranged marriage and by 1919, that arrangement had blossomed into a family with five beautiful children. By the end of their lives, they shared memories, grandchildren, and a tight-knit community that they had built, side-by-side.

Of course, my great-grandparents and Chabad weren’t the ones who invented matchmaking—the Jewish community has been at it for millennia. Isaac and Rebekah, Jacob and Leah (and also Rachel),  and one could even argue, Adam and Eve. My great-grandparents’ experience used to be totally normal—and still is in some parts of the world.
As of 2017, 55% of marriages worldwide are arranged,2 with a divorce rate of only 6.3%3  (granted, divorce is often not as culturally acceptable in some countries in which arranged marriages are prevalent). It certainly has long been a tradition in the Jewish community, even getting a shoutout in the Talmud. The rabbis state that a man may make a match for himself or consult his “agent” (matchmaker).4

Matchmaking might sound archaic, but are current dating practices really working for us? We have more unique opportunities to find our other half than any other generation. There are now over 1,500 dating apps.5 We can filter based on age, religion, ethnicity, location, or desire to have children. And still, this generation is waiting the longest to get married and start a family.6

We’re meeting more people online, but we’re not marrying them. A 2019 article noted that while the numbers of couples meeting online is increasing, the American Sociological Review found that most married people “continue to meet through friends the way they have for six decades.”7 The margin is closer these days,8 perhaps because the pandemic restrictions inhibited people from meeting in person. Either way, the data shows that singles usually trust a friend or an algorithm with the success of their relationships more than they trust themselves to stumble upon their future partner.

At the age of 33, I basically threw my hands up in resignation and said, ‘I want to be matched.’

After years of unsuccessful dates, at the age of 33, I basically threw my hands up in resignation and said, “I want to be matched.” I started asking my friends to play matchmaker for me—and it seems I wasn’t the only one. In the midst of the pandemic, Jewish singles have explored this ancient role and reinvented it for our current age. One international Facebook group, which started as a fun project, allowed members to post on their own behalf or on behalf of their single friends. It clearly struck a chord, because membership soared to 19,000.

For many, it seems modern online dating has merged with the long-held practice of setting up your friends and formed some kind of modern matchmaking. “Yente is now the friend in Jerusalem tagging his friend in New York on Facebook, telling him to check out this woman’s profile; she seems like a perfect fit. Yente is the harried suburban mom trying to juggle full-time work, kids at home Zooming into school, and a barrage of new WhatsApp notifications from her online matchmaking group. Yente is all of us,” Tova Cohen of Tablet Magazine writes.9

In fact, it’s the only reason I’m not still scrolling through Bumble until 2 a.m. Back in the summer of 2019, a good friend of mine and her husband reminded me we had a mutual friend about my age named Michael. She suggested that we would make a good match. I knew him somewhat from our interactions at Messianic Jewish conferences over the years, but not well because he was remarkably shy. Still, he’d been in the periphery of my mind, and I’d wondered about him from time to time over the last decade.

I never thought much would come of it. But somehow, in February of 2020, she did get him to talk to me. After a few weeks of talking, we started dating at the end of March. I traveled to meet his family in May. We got engaged in July.

Sharing that common foundation, devotion, and direction made us even more attractive to each other.

With Michael, it felt different. He was recommended by people whom I trust and respect. He was a part of my community. We shared the same goals and values. We were both at a point in our lives where we were open and willing to commit. Sharing that common foundation, devotion, and direction made us even more attractive to each other.

I don’t think there’s a formula for meeting a life partner—what works for one person may not work for someone else. But my own experience has made me wonder if the way dating looks for my generation is setting us up to fail. Without relying on trusted family and community as part of the process, we are left to navigate one of life’s most complex choices in a never ending sea of options, alone.

Since the beginning, we’ve been made to be in community; for many (not all) that manifests in a desire for a partner. The Torah tells us that when God made man, it became immediately evident that he needed a partner, and this prompted the creation of a woman. The dating landscape has changed a lot since then—there’s no app for God to pull a rib out of your side and make you the perfect partner. But that desire for partnership has remained.

Just because I have a husband now doesn’t mean I have the answers for how to solve the problem of modern dating burnout. I can say from experience, however, that you don’t need to be alone through the process. Involve your friends and community, set goals for yourself, and make others aware of those goals so they can help you stay on track. Even if they don’t arrange a marriage for you, they can encourage you and remind you of your worth as a creation of God. At the very least, you’ll have someone to text from the bathroom stall you’re hiding in on bad dates.

1. Dating Burnout Is Totally a Thing, and Here’s How to Fix It

2. What meeting your spouse online has in common with arranged marriage

7. How marriage has changed from baby boomers to millennials

8. Dating Apps Are Officially the Most Popular Way to Meet a Spouse