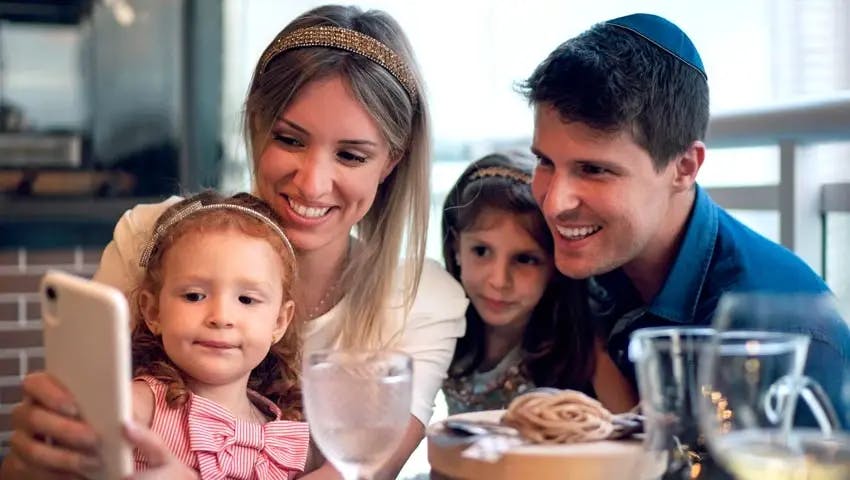 How to Celebrate Passover During a Pandemic

The realization that we’re approaching our third Passover season living through pandemic feels daunting. But this food, family, and friend-filled holiday is intrinsic to the fabric of Jewish life. Even if celebrating it doesn’t look the same just yet, we can still mark the occasion! Here are some creative ways to remember the exodus during an actual plague:

Get creative in the kitchen.

Why not get creative with your Passover cooking? Add something spicy to your matzo ball soup to give it a kick. Add tart, dried cherries to your charoset. Make a delicious, garlic-infused horseradish aioli. Show appreciation for all the ethnicities represented in your household by fusing them into your Passover cuisine. What if Passover was Mexican, Chinese, or German this year?

Telling the story doesn’t have to be as long and arduous as our journey into the wilderness was.

Make your own Haggadah.

Hebrew, English, “Hebrish” – whatever your preference, piece together a custom-made Haggadah! Telling the story doesn’t have to be as long and arduous as our journey into the wilderness was. Get creative! Empower everyone in their own roles and divide them up. Maybe you can add a fifth question, write your own “Dayenu” remix, or give everyone – at home or virtually – a role to play (which could even include costumes and scripts!).

Have something in common.

Stay connected with family and friends by sharing a common ingredient: cook the same recipe, order the same takeout meal, or use the same Haggadah. Everyone could agree to do the same mitzvah (e.g., donate to bring relief to the situation in Ukraine, volunteer for a local charity to help those in need, or have groceries delivered to a neighbor). Whether we can be together with the full extended family or not, we can celebrate in solidarity.

Let’s be honest, most of us have been watching TV and Netflix instead of socializing for a while now.  There are eight nights to fill, so why not take this opportunity to explore the world of Passover cinema. There are plenty of choices: The Prince of Egypt, The Ten Commandments, A Rugrats Passover (a kid favorite!), or the 1979 classic Jesus film, which depicts the most famous Passover seder of all time (read about it here). Make some chocolate-covered matzah, get out the fleece blankets, and enjoy all that extra family time with a Passover movie marathon!

No, not because times are hard, and we’re not talking about the Cup of Elijah, but because many Jewish people have been adding a fifth cup to the traditional four, as the New York Times says, “… either to note the ultimate ‘redemption,’ the establishment of the State of Israel, or to celebrate Moses’ sister Miriam, and the role of women throughout Jewish history.”1 We can also raise a glass in honor of the personal triumphs God has given us in the last year.

From slavery in Egypt to the current pandemic, God has protected us.

As we remember the original ten plagues, take note of all the ways God has sustained us as a Jewish people in the days since. Think about all the remarkable stories of human endurance and sacrifice – and Messiah’s ultimate sacrifice and victory over sin and death. Ask each guest to tell a story of triumph that has inspired them. From slavery in Egypt to the current pandemic, God has protected us, sustained us, and allowed us to reach this season.

Why Is This Night More Complicated Than All Other Nights?

When Jesus Was Really Born