It was Friday afternoon and our music team, the Liberated Wailing Wall, was being rudely “escorted” off the campus of Wits University in Johannesburg, South Africa. Our concert had been cancelled due to pressure and protest from the Jewish student association. Now we were being further impeded, forbidden even to hand out gospel tracts. As we were leaving, one protester shouted, “You think this is bad? Just wait until the Market Theater!”

The Market Theater is a well-known concert venue in downtown Johannesburg. I didn’t take the threat lightly. Still, the extra security guards we hired for the event were not prepared for what happened. Hundreds of protesters formed a human chain outside the entrance to the theater, keeping most concert goers away. When the guards attempted to intervene, one of the leaders pulled a gun, aimed it at the head of security, and led the protesters as they forced their way into the auditorium.

The riot police finally showed up and informed me they didn’t think it wise to try to drag the protesters out. Our attempts to start the concert were drowned out by the howls of the protesters (despite our sound equipment). Someone turned out the lights and people rushed the stage, pulling out microphone cords. At that point, the police strongly suggested we cancel the performance, our last before leaving the country. I announced with great regret that it seemed in South Africa free speech wasn’t allowed, at least not to Jews who believed in Jesus. The protesters cheered and triumphantly marched out of the theater, believing they had scored a victory. And frankly, that’s how it seemed to us as well. Just imagine how my team and I felt.

But as we prepared to leave, a woman asked me about what had just happened. I mumbled a brief explanation, at which point she informed me that she was a reporter for Reuters. She had come to the area for a different event, but she was quite interested in our story and asked if I would care to give an interview. I did, and the next day Jews for Jesus was front page news all throughout South Africa. 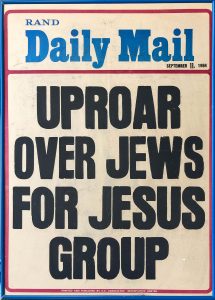 As a result, a pastor invited us to give a concert at his rather large church, which happened to be in a very Jewish part of town. Another university invited us to give a concert on their campus. There, a Jewish student named Alice prayed with us after the concert and has been following Jesus ever since. (I am still in touch with her.) After a few days of amazing opportunities for ministry, we boarded our flight to Australia. The airline staff had seen the stories in the press and as a result chose to bump us all up to first class for the long flight to Perth. Wow! Just imagine how my team and I felt now!

An important part of Jews for Jesus training is learning to deal with the hostility that occasionally comes at us. I can summarize two steps that you might find helpful – especially if you are maligned for your faith (or really anything else) by strangers.

The first step is to depersonalize the anger while personalizing God’s promises. Remember that the person who is saying hostile things to or about you does not know you. But God, who does know and love you, has promised to bless you when you face rejection and hostility in order to speak up for Him (Matthew 5:11).

Once you depersonalize the hostility and personalize God’s promises instead, it is easier to take the second step: de-escalate. Don’t try to make yourself heard by being louder than the other person. Smile if you can, and gently ask why they are so angry. You’d be surprised at what God can do when you are persistently humble, gentle, and caring towards angry people.

Of course the situation in Johannesburg was beyond our power to de-escalate. But God blessed us proportionately. He made sure that far more people heard the gospel than would have had the concert not been shut down.

Time and time again, I have seen God use opposition as an opportunity to glorify Himself and expand the reach of our gospel message. No one enjoys opposition, but God promises us the grace to endure it. And He often has a plan to use unpleasant situations for far greater things than we had in mind.

I expect that Jews for Jesus will experience a rise in opposition, especially as we connect with people from the Haredi (ultra-Orthodox) Jewish community. We will try to avoid undue attention and opposition without compromising integrity, and that will sometimes mean not publicizing certain specific details, even when reporting to you. But even so, opposition is a fact of life.

Recently I have been rereading the book of Acts and it struck me that this principle of opposition bringing opportunity was part of how God expanded the early church. After Peter and John were arrested in Acts 4, the members of the early church did not pray for protection – they prayed for boldness (v. 29)!

We aren’t the early church. My guess is that we are the late church, the church much closer to the return of Messiah. The Bible tells us to expect increasing opposition as we draw nearer to those last days. Certainly we see our culture growing increasingly hostile to the church, and our government is less and less favorable to the principles of freedom of religion that were so important to our founding fathers.

But rather than wringing our hands and bemoaning our loss, we can be like those early Jewish believers in Jesus. We can pray for boldness and look for God to bring greater opportunity. Our founder Moishe Rosen used to say, “Every knock is a boost.” That is certainly true when we stand for Jesus and for his gospel.

Haven’t you found that your greatest opportunities for growth, and your greatest accomplishments, were not achieved within your comfort zone? There is nothing wrong with enjoying comforts as God provides, but living as we do in this broken world, we should not expect comfort to be the norm. God has promised us an eternity of joy where there will be an end to struggle.

Brothers and sisters, let us take our stand in the confidence that comes through the power of the Holy Spirit. Let’s look for the opportunities that will come with whatever opposition we may be facing (Ephesians 6:13).

Find out more about David Brickner, his writings, speaking schedule, and possible availability to speak at your church at jewsforjesus.org/david-brickner-bio.