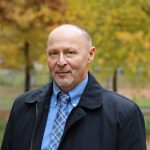 About 20 years ago, Eduard Granovsky, then part of our Moscow team, began regularly visiting a Jewish mother and son, Leah and Yuri. Then in 2002, Eduard was transferred to Ukraine.  Ilya Khaimovich stepped in and has been visiting Leah and Yuri ever since. Leah eventually opened her heart to the gospel and was baptized in 2011. Ilya has continued visiting them both and, at the request of the pastor where she was baptized, he brings her communion. Meanwhile, Yuri has always been open to talk to Ilya, but has maintained that he does not believe in God.

In October, the Moscow branch had a special outreach, and Ilya invited our new missionary, Pavel Gorelik, to come with him to visit Leah and Yuri. While Ilya conducted the communion service for Leah, Pavel and Yuri talked in another room. 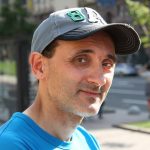 Pavel says, “Yuri told me that he now believes in God, but with his own faith, deep inside of his soul. I argued that you can try to eat a meal deep inside of your soul, or you can try to sleep in your own way deep inside of your soul. But you will never satisfy your need for food or sleep by reaching down into your own soul to find it. In the same way, you will never find a relationship with God by reaching down into your own soul. Yuri agreed that this was logical and that I was right.” 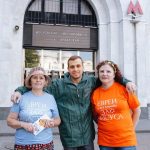 Just then, Ilya finished his visit with Leah and rejoined Pavel and Yuri. Ilya surprised himself, as well as Yuri,  by beginning the conversation by asking Yuri, “Do you want to invite Jesus in your heart?” Ilya was so surprised by his own question; he believes that God Himself led him to ask in that moment.  Yuri said, “Yes,” and then prayed to receive Christ. God gets the glory, but how wonderful that He used the teamwork of Eduard, Ilya, and Pavel. Halleluiah!