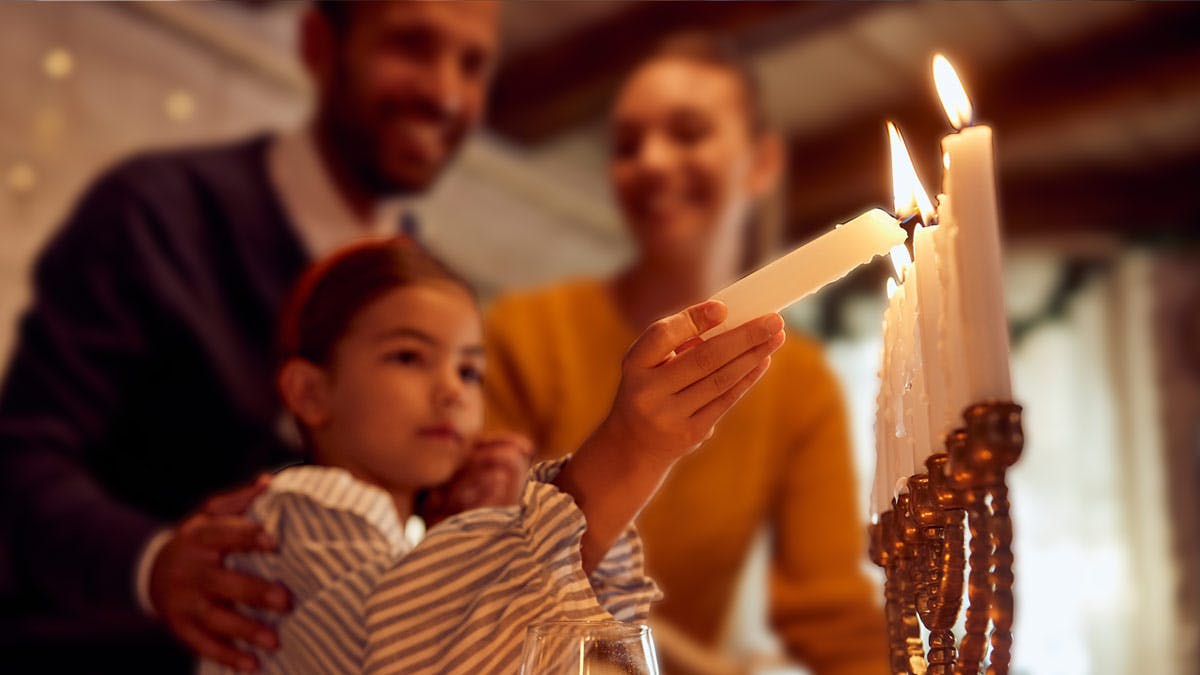 Hanukkah (which means “dedication”) is known both as the Feast of Dedication and the Festival of Lights. Mentioned only once in the Bible (John 10:22), it commemorates the Jewish people’s against-all-odds victory over the Syrian forces of the villain Antiochus. Antiochus had desecrated the holy Temple with pig’s blood and demanded that Jewish people worship idols.

Much of the Hanukkah celebration focuses on the legend surrounding the rededication of the Temple. It is said that there was only enough oil to keep the flame alive for one day (it was supposed to burn continuously). Miraculously, the oil kept the candelabra burning for eight days—until such time as more oil could be procured. It’s a legend, but it might well be a true legend. After all, it sounds like something our God would do, doesn’t it?

Why are there nine branches on the hanukkiah?

So if the legendary miracle of the oil was that it burned for eight days, why are there nine branches on the hanukkiah* (the nine-branched candelabra used to celebrate the holiday)? Well, eight lights represent the eight days of oil that burned, and the ninth is the shamash.* Shamash means “servant” or “caretaker.” Most of the year, it refers to the person who takes care of the synagogue. But at Hanukkah it refers to the first candle that is lit on the hanukkiah—the candle that is used to ignite all the other candles.

Today’s contemporary hanukkiahs come in an amazing variety of designs. But the more traditional hanukkiahs place the shamash at the center of the candelabra, often slightly elevated from the other candles.

When I was a child, my sister and I took turns lighting the Hanukkah candles. Our parents would strike the match that lit the shamash. My sister, nearly five years older than me, had the honor of using it to light the candle on the first night. I remember watching the flame as my mother lifted the candle from the center of the candelabra and cautiously handed it to me on the second night of the holiday. I tilted the shamash so its flame touched the wick of the first candle—and then the second—before I replaced it ever so carefully back in the center of the hanukkiah.

Our celebration differed somewhat from those of my school friends because while my parents were Jewish, they also believed in Jesus. I remember my father explaining that just as the shamash, or the servant, is used to bring light to the other candles, so Jesus came to be a servant, bringing light into the world. And he told us that when Jesus lives in our hearts, we too become servants, bringing His light to other people.

When I think back to those wonderful Hanukkah celebrations, I remember the bright glow of the candles and the wonder I felt as I reflected upon the Servant who bent down to bring light to those whom He served.

You don’t have to be Jewish to appreciate Hanukkah. May the flame of the Shamash burn brightly in your heart as you share His light with others this holiday season!

PS: This year, Hanukkah begins at sundown on December 18 and lasts for eight nights. Why not let your Jewish friends know you are thinking of them this season by sending them a Hanukkah card?