I was born in 1930 and raised in the region of Mühlviertel in northeastern Austria.

In 1938 Hitler annexed Austria. Our region was terribly poor. When Hitler came we did better, so we were very excited. Hitler also brought organization and purpose.  At eight years old, I and the other children had to join the Hitlerjugend (Hitler Youth), where we were raised in strict military style. Hitler even gave us a beautiful National Socialist uniform. Before that I only had miserable poor clothes.

I was proud to be in the Hitler Youth. I was Catholic, but the Nazis taught us that religion was nonsense. And we were taught that the Jews were to blame for wars and all the problems in the world. I was in Linz, the capital of the province of Hitler’s birth, when the Nazis burned down the synagogue in November 1938. 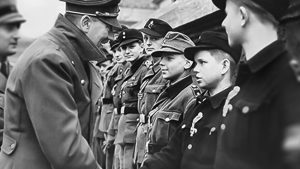 When I was eight, Hitler traveled through my home village of Bad Leonfelden. I was wearing my new uniform and holding the golden book of the city that Hitler signed. He tousled my hair and caressed my cheek, then got into his car and went on.

Five years later, the director of my school recommended me for an honor for my work in the Hitlerjugend. I was invited to Hitler’s home in Berchtesgarten, Germany, on the Austrian border.  I shook Hitler’s hand. Goring, Bormann and Himmler were there. When I started to pet Hitler’s Wolfhund (German Shepherd), Hitler said, “Do not touch the dog! It is trained to guard.” But I had already begun to caress the dog, and the dog was docile toward me. Hitler was amazed and told me the dog’s name, which at the time was kept secret. I have since forgotten the name of the dog! Hitler spent an hour or two chatting with me. He was very friendly toward me because I was from his home region, and he asked me all kinds of questions.

I was in Linz during the Allied bombing from August 1943 until the end of the war. After one bombing raid, I was buried in a pile of rubble, but emerged unharmed. Soon after the last big attack on Linz, the war ended. I heard on the radio, “Today our beloved leader Adolf Hitler fell in the honorable fight over Berlin.” I was devastated. Weeks later we learned that Hitler was not killed in action but had committed suicide. As Hitlerjugend, our slogan was “Hart wie Grubstahl, zäh wie Leder, flink wie Windhunde” (hard as steel, tough as leather, swift as a greyhound). Now I saw that Hitler was a coward and had lied to us. It was over for me with National Socialism.

I was caught by the Russians. Since I had held a high position in the Hitler Youth, the Russians wanted to convert me to communism as a trophy from fascism. I was imprisoned for six months and then served three years of forced labor. They tried to brainwash me to believe in communism, but I was not very interested. However, I learned a lot about the Jews from them. The Russians were mostly against the Jews, but I also heard about other things which the Jews did well. So I was no longer that much of a Jew hater. I eventually became a Russian soldier and worked for the KGB. I even met Stalin and had vodka with him and his senior staff when he came through town. Everyone got drunk.

After my military service, when I was in my early 30s, I traveled to Greece, Beirut, Damascus, Amman (Jordan) and Jerusalem. For some reason, I suddenly became very interested in learning if Jesus was really born in Bethlehem, so I went there as well. I became ill in Israel, with a severe intestinal problem that forced me to go to a hospital when I returned to Austria.

Once my health returned, I began to travel again. I had a passion for mountaineering. I climbed the Matterhorn three times as well as Mont Blanc. I also explored many religions, including Hinduism, Zen and Islam. Islam attracted me the most, but as I followed events in Israel, it seemed to me that the Jewish people wanted peace, but the Arab governments that surrounded them wanted war. As Arafat and other militant Palestinian leaders organized terror attacks, I became more and more sympathetic to the Jewish people.

After spending a night camping on a cold mountain, my hearing was permanently damaged. In the hospital, I was filling out forms with a doctor to get hearing aids. The doctor had to fill in my religion. I told him I have no religion and did not believe in anything.

The doctor invited me to a Bible study at his church, and I accepted. The Old Testament captured my interest, especially with all the history it contains.

Then someone invited me to a talk by a Messianic Jew (one who believes in Jesus). After his talk, I had a two- hour discussion with him. He explained that the Jews are human beings, not sub-humans as I had been taught. They make mistakes like all of us, but they are the chosen people of God. By the end of our talk, I had become a friend of the Jews. This man also showed me how many of the promises in the Hebrew Scriptures had been fulfilled, including some which he said were about Jesus.

In 2003 while hiking in Zurich, I fell into a crevasse, a crack in a glacier. I was saved just before I froze to death. When I saw the doctor, I said, “I guess I was lucky!” The doctor said, “No, it was not luck. It was the One above.” This was when I began to think that perhaps God does exist after all.

As I continued to study the Bible (Old and New Testaments), I came to believe that Jesus really is the Son of God and the Messiah of the Jewish people. In 2007 I traveled to Israel for the Feast of Tabernacles and was baptized in the Jordan River.

As impossible as it may seem given my background, I now truly love Israel and the Jewish people. I wear a small pendant that is a replica of the high priest’s breastplate with the names of the tribes of Israel. One thing I especially admire about the Israelis is that they pick up those who are ill and injured and bring them into their hospitals and care for them—even those who are their sworn enemies. They do the most difficult surgeries on children, including heart surgeries, even on the children of those who again and again say they will push the Jews into the sea.

What does Jesus say in the Sermon on the Mount about loving our enemies? If we would all do these things, we would have paradise on earth.

Sadly, anti-Semitism is still very much alive in Austria. When I am able, I take part in public debates and conferences and defend Israel. Many times the anti-Semites are not willing to listen to my points and tell me to be quiet. In some cases they have accused me of being Jewish!