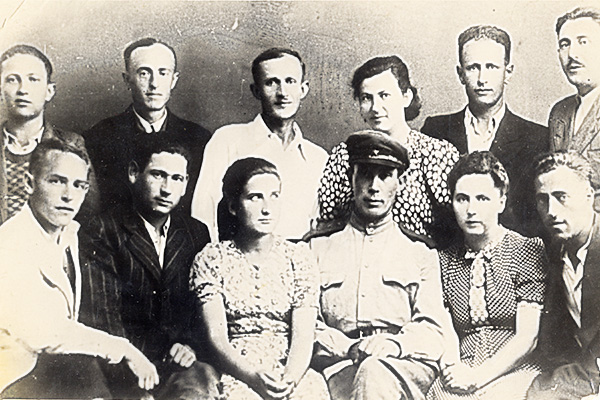 Some of the participants in the uprising at the Sobibor extermination camp, including Esther Raab (sitting, 2nd from right) and Zelda Metz (sitting, 3rd from left). Poland, August 1944. Photo courtesy of Ghetto Fighters' House Museum, Western Galilee, Israel.


Knitting is just a hobby for me. But in the Nazi death camp of Sobibor in Eastern Poland, knitting saved several Jewish women from death.

Through her organization, A Tour of Roses,* pianist and vocalist Sally Klein O'Connor has done several concert tours throughout Europe to promote healing and reconciliation from the Holocaust. My husband, Samuel, and I accompanied Sally on her June 2012 tour, which included a trip to Sobibor. Sam and I are Jewish, and his family came from this part of Poland.

Like Sally, Sam and I are Messianic Jews - Jews who believe in Jesus. Both sets of our parents are also Jewish and Jesus followers. My mother's family emigrated from Yugoslavia to Canada in the 1930s. Some of her relatives were in the concentration camps. Although we are both from Colorado, Sam and I met in Moscow (Russia) when he saw a mezuzah around my neck and we got to talking.

So Sam and I shared a personal and mutual interest in honoring the victims and survivors of camps like Sobibor. Locomotives regularly pushed freight cars packed with Jewish men, women and children to Sobibor. A handful deemed "useful" were put to work. The rest were immediately sent to the gas chambers. An estimated 350,000 Jewish people were put to death at this camp between April 1942 and October 1943.1

We arrived at the small museum at Sobibor and walked through the rooms, the walls covered with photographs. Sam slowed down as he saw Nazi flowcharts detailing the most efficient ways to kill the Jewish prisoners. My husband, a software engineer, is used to flowcharts - but not death charts. 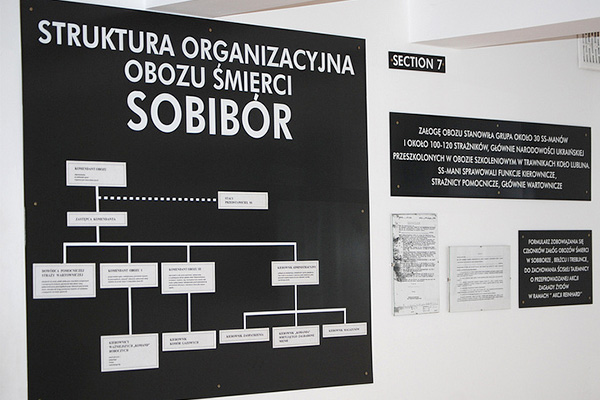 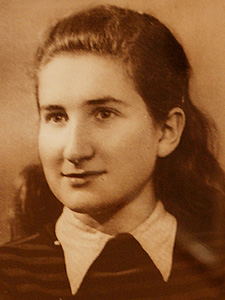 The knitters, teenage girls, were among the few spared from immediate death. We saw their photographs and learned their stories. Esther Raab, Hela Weiss, Regina Zielinksi, and Zelda Metz had worked together in Staw-Sajczyce, a Nazi forced-labor camp. Once Sobibor was ready for "operation," they were all sent there in December 1942.

Hella, eighteen when she arrived, recalls that day:

We went through a deep forest, and then we saw a sign [that] says Sonderkommando [a squad of Jews ordered to build the camp who, when it was fin­ished, were shot]. As in a dream, I heard a voice of one of the Germans say: "Who can knit?' and I stepped out of the line... . The German ordered me to come forward, and then they took me to a cabin, where I found two girls whom I knew before: Zelda and Esther. In my childhood, my mother taught me how to knit socks, so my job was to provide socks for the Germans and to iron the shirts of the S.S. men.2

Regina described how she came to learn that her mother and sister, who had arrived with her at Sobibor just the day before, had been killed in the gas chambers:

We were taken to get some better, warmer clothes. They happened to show us where there was a pile of shoes and clothes, and I recognized [them] from our transport... .  My sister's shoes ... would have fit me. But I had to fake ...  I said, "They are too small. I can't wear them." There was even my mother's jacket... .  Later on we had to sort those clothes, and I even undid a little pocket on the jacket where she had her wedding ring sewn in. It was very hard to bear that, but life somehow had to go on till the next moment, and our life in Sobibor was only counted by the moments.3

The knitters, about a dozen of them, were together in a separate barracks, as the Germans didn't want lice in their newly knitted garments. Zielinksi remembered her work with the clothes of the gas victims:

They didn't have much new wool, so we had to undo ... old sweaters, cardigans or jumpers... . We had to make the old wool new. This way we started to knit. All the socks were for the soldiers. They had to be big and long and warm. We had to make at least one sock a day. So the knitting time wasn't just from dawn to dusk. Sometimes it carried over as long as the lights were on, till about ten o'clock at night in the winter. Later on, it was a little longer.

Esther believed that somehow they might escape: "All the time that I was there, I always felt that we have to do something. And maybe if one would get out and tell the world what happened here, it would be worth it."

Unbeknownst to Esther and the other knitters, a resistance group within the camp, including former Soviet-Jewish prisoners of war, were working on a plan to break all the prisoners out. They kept it secret until October 13, 1943, when word spread for the prisoners to be ready for something the next day. On October 14, the resistance fighters stealthily killed several key German officials, but the revolt was discovered just as the 600 prisoners headed for the front gates. In the ensuing chaos, 300 escaped. Most were recaptured. Fifty-eight people - including Esther, Hela, Regina, and Zelda - escaped and survived.

Regina recalled her thoughts as she ran through the woods: "I am free. I do not care what happens to me. If I get shot in the back, it will be a mer­ciful death, because I won't have to die in the gas cham­bers. I am not in the camp. I am breathing free air."4

Another survivor, Eda Fischer, worked in the laundry rooms and was like a mother to the young girls who had to knit and iron. She would be a witness in the Adolf Eichmann trial.

After the uprising, the Nazis closed Sobibor. They demolished the camp and tried to erase any trace by planting trees over it.

It was pouring rain the day we walked the grounds of Sobibor. As I stood there, raindrops and tears made tracks on my face. My husband was sobbing. We grieved in the downpour for the loss of life, for the scars carved into the land and hearts.

These girls evaded the gas chambers because they could knit.

If you're not a knitter like me, you may have never heard of World Wide Knit in Public Day (which actually spans one week every year). When people asked me what I did for WWKIP that year, I proudly said, "I went to the death camp at Sobi­bor, and I knitted my sock because I wanted to, not be­cause my life hung in the balance. I knitted for the sock knitters of Sobibor whose names we don't know and for those who survived incredible odds. I knitted for life. In remembrance there can be hope."5

Heatherly Walker and her husband, Sam, have six children and live in Northern California, where Sam serves as spiritual leader of Congregation Harei Yeshua. Among her knitting creations are "Remembrance Socks." Heatherly explains: "These socks have a subtle statement ring­ing through them. I made a few changes in a traditional pattern to hide Jewish stars among the stitch­es. The hidden stars proclaim: ‘We are still here. We are free.' They are in remembrance of those who died, those who survived, and the rescuers and liberators who risked their lives."6