Why I Host Holocaust Survivors in My Living Room

And why you should, too. 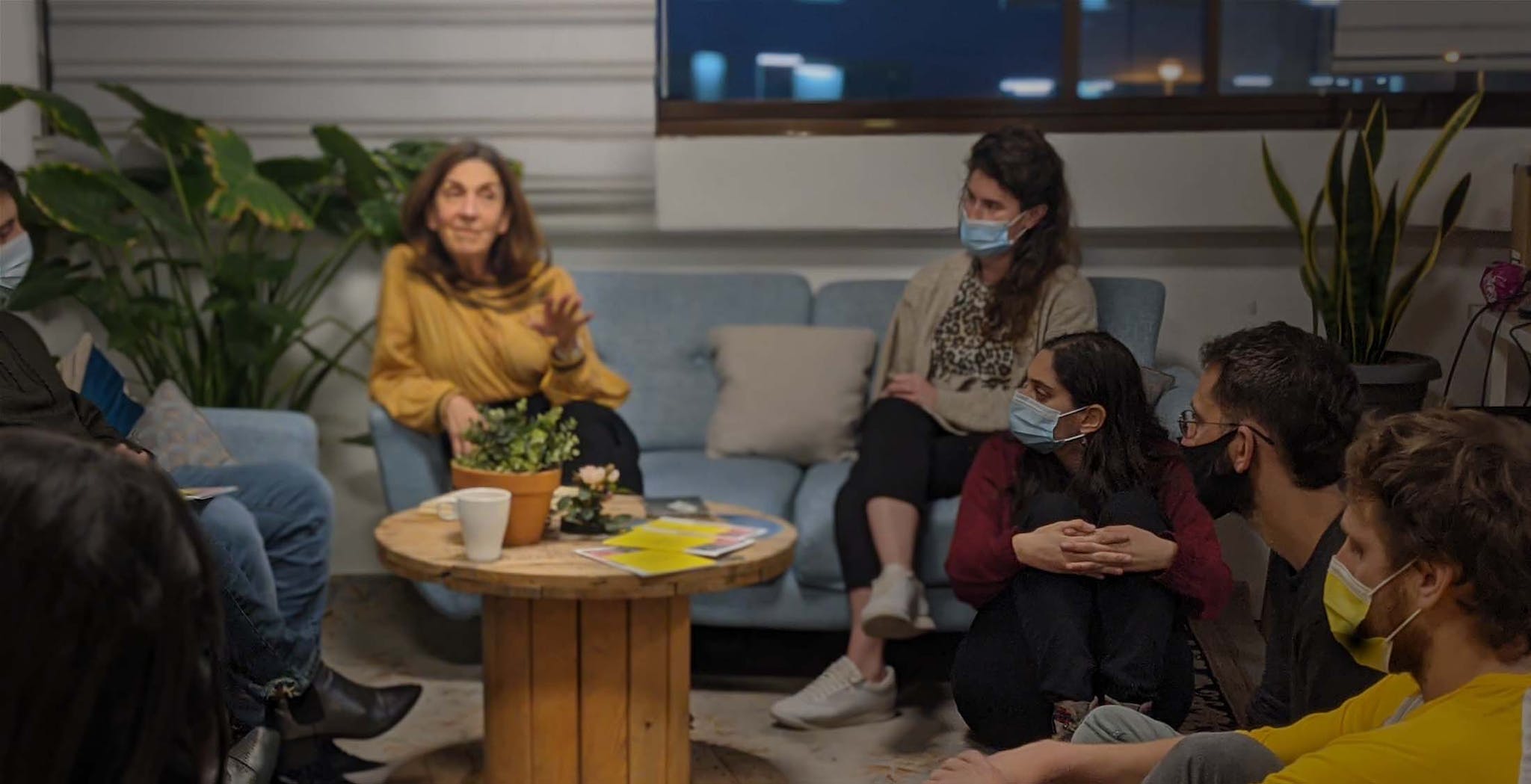 Adi Altschuler is a passionate young Israeli who feels strongly about her Jewish values and our vision as a people for Tikkun Olam, the repair of our world. So, she was disheartened when she attended a ceremony for Yom HaShoa (Holocaust Remembrance Day in the State of Israel) and, looking around the room, thought to herself, I’m the youngest person present! And as local leaders spoke, the choir sang, and the chazzan chanted traditional prayers alongside Holocaust survivors, Adi realized a sad reality: If something is not done, we will lose the next generation.

The Pain and Pressure of Remembering

Remembering the Holocaust is a sacred duty for any Jew, anywhere in the world. Nowhere is this more keenly felt and practiced than in Israel. In addition to participating in the global observance of Holocaust Remembrance Day each year in January, Israelis also have daily reminders of the Holocaust embedded in their society and public education. But what’s more, Israel sets apart an additional, special memorial day each spring: Yom HaShoa.

On this day, the country rolls to a stop—places of entertainment and many public establishments are closed by law.1 There is a national ceremony and local events. It is a time for Selichot prayers, singing of the “El Malei Rachamim,” and, of course, the “Kaddish.” A platform is given to Holocaust survivors and their families, and they give public addresses and light the Yahrzeit candles. Any and all media outlets and places of public entertainment are required to shut down except for those participating in Yom HaShoa events by hosting the ceremonies or airing documentaries or Holocaust-related talk shows.

Some may argue that Yom HaShoa is more rigorously and legally practiced in Israel than Shabbat or Yom Kippur. And yet, the enormous effort to commemorate the Holocaust in Israel is not reaching the next generation.

Israeli youth—teens in particular–experience immense pressure. In addition to the personal ties they have to survivors and the religious pressure that often dominates the available forms and forums of remembrance, they’re also being enlisted into compulsory military service, fighting for their existence daily. They may feel they don’t need another day to remember that they have been and continue to be a persecuted people, and choose to ignore it.

A New Way to Commemorate

So Adi came up with an idea.2 She decided to have an informal gathering with some friends from the neighborhood, most of whom were young, to introduce them to a friend of hers—a Holocaust survivor. Adi prepared some nosh, asked someone to bring a guitar, and set a date. To her surprise, her house was packed! Everyone wanted to get the chance to meet a real, live witness of the horrors of war. Her neighbors surrounded the survivor, hanging on to every word she said as they sat in appreciative silence. They sang some poignant songs from everyone’s favorite Cohen (Leonard) and asked questions about her story. The evening went long into the night

Everyone who attended told Adi, “This was amazing—I wish my friends had been here!” Adi thought of the network of people beyond her reach, and the living rooms that could be filled like hers. She and a few of her friends decided they would ask others to organize the same event in their own homes for the next Yom HaShoa. They call it Zikaron BaSalon, which literally means “remembering in the living room.”3

It’s been over 10 years since Adi and her friends hosted the first salon, and today there are over 1.5 million hosts and participants around the world.4 Even the former Israeli president Reuven Rivlin faithfully hosts a Zikaron BaSalon in his own home!5 This passionate group of Israeli young people has been able to turn Israel’s most sacred cow upside down and impact real change in Israeli society that will touch generations to come.

My own first experience of the event was hosting it with survivor Alan Rosenberg. Alan was nervous about it. He’d never been to my home before, and he didn’t know anybody who would be there.

Alan grew up as a Gur Chassid in the back country of Poland near the city of Lublin. He was just 11 years old when the Nazis rolled into his little shtetl. He saw his grandparents, parents, and all of his brothers and sisters chased down or sent away to death camps. He was in several camps, including Dachau. In a miraculous turn of events, he was reunited with his father again in the last camp, Buchenwald and, somehow, they survived together. By the time the war was over, he was a teenager, and his story continued with some surprising turns of events! He got drafted into the American army, moved to Memphis, Tennessee, and even worked with German refugees—all before the age of 18. I was eager to hear his story in full, and for others to share in that precious honor.

The night before our event, Alan called me and said, “Josh, you know I’m not sure that I can go through with this—but I’ll do it for you.” I felt bad about his nervousness, especially knowing that he had already endured so much, but I knew the wealth of benefits this evening could reap—for both him and for each of us. So I encouraged him and eased his nerves.

The house was full, and as Alan shared, everybody was captivated by his very unusual story, not only of survival, but of everything that came after (including running into his childhood sweetheart on the streets of Paris and then marrying her!). There were other such “unexpected turns of events.”

The evening was going perfectly, until Alan hit a point in his story where he lost track of the timeline. He started repeating himself, seemingly caught in a memory cycle. I stepped in, asking him a few guiding questions to bring him out and move him forward.

After Alan shared his story, my son Ilan played a piece on the piano from Avishai Cohen, the famous Israeli jazz musician, called “Remembering.” The melody of the song is used as a narrative, and at several points, his melodic narrative falters and repeats, falters and repeats. It is enthralling to listen to, but what was moving was how the piece, played by my son, who is also a descendant of Holocaust survivors from Lublin, reflected Alan’s own story and his struggle to recall it to the present. As the evening concluded, everyone erupted in cheers, clapping for Alan in gratitude. They formed a line to speak to him. It seemed almost therapeutic for him, and the visual was something I’ll never forget.

Making a Safe Place for Truth

I am deeply thankful for how Zikaron BaSalon has helped me to not only treasure and honor the value of Holocaust Remembrance for my children and my community, but to do so while publicly and proudly identifying as a Messianic Jew and working as the France director of Jews for Jesus. As we bear witness to the damage of hatred and division, I am convinced that it is more important than ever for Jewish organizations to include Jewish people of all types in ways that unite instead of divide.

I am proud to be partnering with Zikaron BaSalon, and I’m amazed to see how they are transforming Israeli society and the world. The time is limited and precious, the duty pressing. Here in Europe, antisemitism is on the rise and Holocaust denial is at its peak. Globally, Holocaust survivors are reaching the twilight of their lives, and it’s essential to capture these last moments before they enter into their much-deserved rest. In all of this, I am dedicated to remembering the truth, hearing their powerful stories, and spreading life-changing love.

Would you consider hosting a Zikaron BaSalon event in your own home? You can write to me at josh.turnil@jewsforjesus.org, and I would be very happy to connect you with an international coordinator.

Passing on Jewish Heritage in an Intermarried World