The backstory of our beloved holiday can be a bit shocking to readers with modern values. 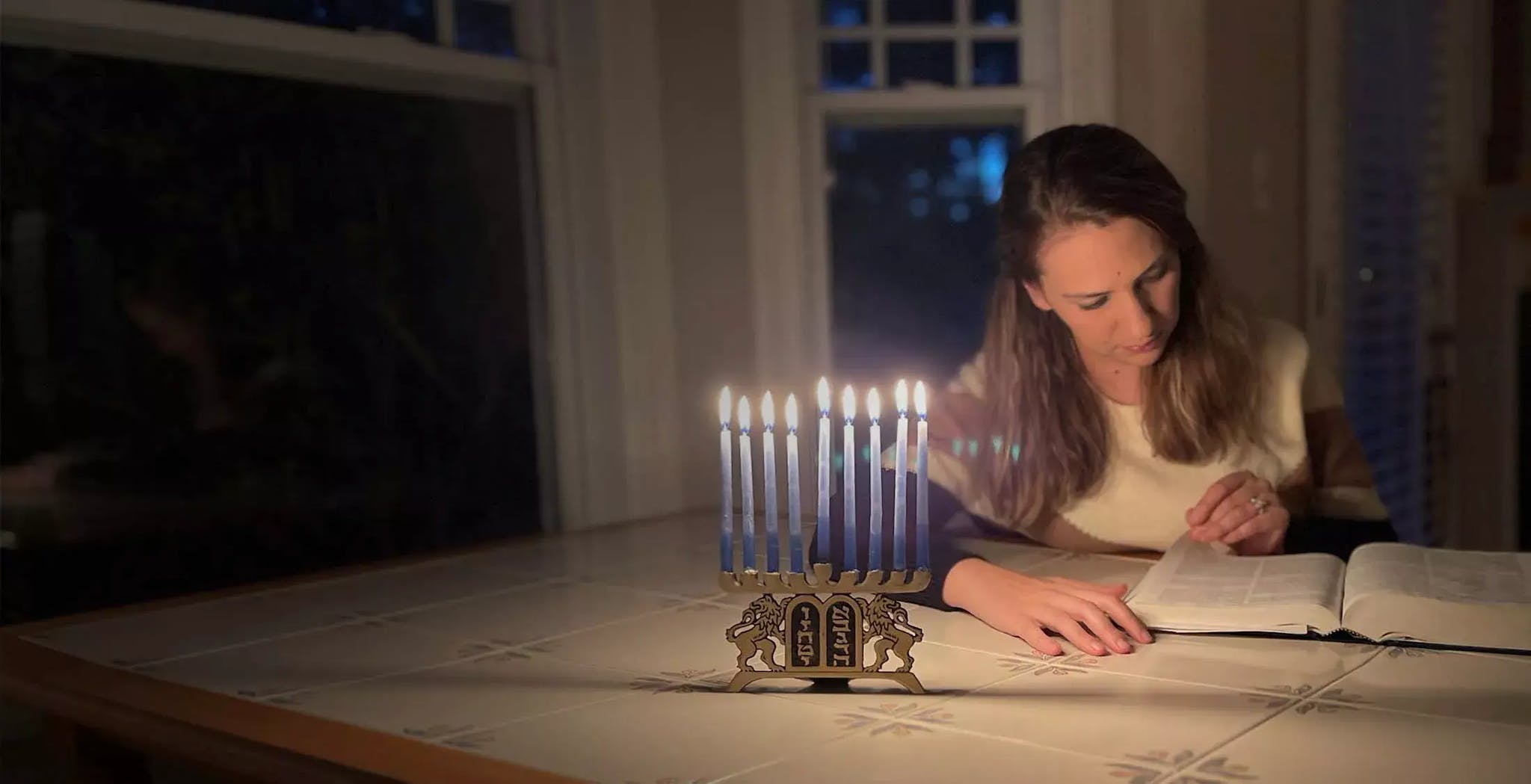 Many of my most comforting childhood memories come from Hanukkah, and I still greatly anticipate the season every year. When the winter winds start to howl and icicles form on the eaves of the house, I just think of the candlelight that will soon glow over the windowsill and the piping hot latkes that will sizzle on the stove. My great-grandmother’s latke recipe from Sicily is a treasure trove of rich scents and even richer history. Loaded with salty cheese and cooked in golden olive oil, they hint at a Sephardic tradition from the Middle Ages when cheese pancakes called cassola were eaten on Hanukkah to honor the Jewish heroine Yehudit,1 who lured the invading general to his death with wine and goat cheese.

Ironically, these days we don’t often hear of Yehudit. Instead, our focus is solely on a renowned family of priests led by a father and five sons, better known as the Maccabees. I had never thought much about that until I read the full story of the Maccabees. I was surprised to find that the values of our modern, tolerant, and inclusive forms of Judaism are notably absent from this ancient story. Like a problematic old tweet from the archives of a beloved TV personality, should the real story of Hanukkah give us pause in celebrating the holiday?

Even some non-Jews today could probably recount main parts of the familiar story (that Rugrats episode certainly helped). It features a courageous band of brothers who took on a great empire with nothing but faith and a few willing men. They defeated their enemies, liberated their people, and rededicated the Temple. The book of Maccabees contains the exhaustive account of this story and includes details that most people omit in its retelling. The story usually starts when a royal Greek officer tried to force a local kohen, Mattathias, to offer a pig on an altar in front of his entire town. When Mattathias refused, an eager Jewish man stepped up to do the job. While we do know there was a monetary and political reward offered (1 Maccabees 2:18), we don’t know for sure that this man’s motives weren’t honorable. Perhaps he had a starving family to feed. Perhaps he was sick of the occupation and wanted peace at any cost. Perhaps he could see the conflict escalating between Mattathias and the officer and was trying to avoid a bloodbath. Regardless, any good intention he might have had was foiled when Mattathias, filled with anger, unsheathed his sword and killed both the Jewish man and the Greek officer. Mattathias then rallied the zealously devout together and they escaped into the hills to start their revolution, led by Mattathias’ soon-to-be famous son, Judah (1 Maccabees 2:27—28).

Sometimes we forget that our history as Jewish people is messy.

If I’m being honest, the recounting of this violent story hits me as slightly cringy. But upon reflection, I realized there’s plenty of uncomfortable themes in our other holidays—like when we sing merry tunes about hanging parties on Purim—or even in the Torah when we’re commanded to annihilate entire civilizations (1 Samuel 15:3). Sometimes we forget that our history as Jewish people is messy. But why wouldn’t we confront oppressive neighbors and call for the execution of a dangerous enemy like Haman?

In the same way, Mattathias and his sons had every reason to be zealous defenders of their faith. They were suffering under a merciless occupying force. In pursuit of their “one people” law, which was mandatory Hellenization (1 Maccabees 1:41—42), the Greeks forced pagan sacrifices in the Temple, burned and mutilated Torah scrolls, and executed anyone in possession of sacred Jewish texts. Mothers who chose to circumcise their sons in accordance with the covenant were executed along with their families and the mohel who performed the rite. The infants themselves were hung from their mothers’ necks. It was unthinkable cruelty (1 Maccabees 1:54—64).

We don’t think twice about celebrating Mattathias because he defended our people against antisemitism. We consider him a hero, even though his violent response would be considered brutal in our time. After all, we’ve been taught that he was a holy, appointed leader who acted for the sake of his people’s survival when he challenged the turncoat and the invader. Afterwards, they went to war against the occupying armies and won—right?

The tolerant, inclusive Judaism of today would be completely repulsive to the Maccabees.

Not really. What actually happened is that Mattathias and his sons went to war against their own people, terrorizing towns and families with forced submission to Torah and involuntary circumcisions, and executing those who resisted (1 Maccabees 2:44—47; 3:5—6, 8). The Maccabees’ first move was to turn on their own people who had abandoned a Torah lifestyle. Logically, that would mean the Maccabees would have no issue slaughtering the majority of Jewish people today and forcibly circumcising their sons. The tolerant, inclusive Judaism of today would be completely repulsive to the Maccabees.

We also find evidence that the pious of that time believed the persecution they were experiencing was due to the national sin of Israel (2 Maccabees 7:32—33, 37—38). Today, that would be equivalent to blaming all antisemitism on the leniency of progressive expressions of Judaism—and then setting out to remove “these sinners” from the Jewish people. This is what Judah and his brothers were doing. As a result, the level of unrest grew, and the Gentile armies flooded in to subdue this renegade priest and his band of radical followers. It’s only then that the Hanukkah story we all know and love conveniently resumes.

A Different Approach to Torah

What do we do with this? How do we celebrate Hanukkah without celebrating everything about the Maccabees? It’s easy to simply cancel something uncomfortable in history, but it is both harder and more important to learn from our ancestors—both from their virtues and their faults. Thankfully, we’re not the first generation of Jewish people to wrestle with this.

The fallout of the Maccabees story saw things go from problematic to truly awful. Once victory was achieved, Jerusalem recaptured, the Temple restored, and the nation was once again following Torah (willingly or unwillingly), the Maccabees seemed to forget they were priests, not kings. They established a government (in and of itself a complete violation of Torah2), which became known as the Hasmonean dynasty, one of the most corrupt regimes in our history. Several generations later, the infamous maniac King Herod married into this family, attempting to claim a position as “King of the Jews.” Herod was a murderous tyrant (and a client king for the Romans).

Many in Israel recognized that it was time to find a better path. Several leaders began moving towards a softer, more inclusive expression of Judaism. For instance, the goal of the Pharisees (who were persecuted and even massacred under the Hasmoneans3) was to create a Torah lifestyle that all Jewish people could follow.4 Even the renowned Rabbi Akiva emphasized the heart over the letter of the law when he said that loving your neighbor as yourself was klal ha’gadol ba’Torah (the central principle of Torah5). In the midst of this political upheaval, Rabbi Yeshua (Jesus) took that principle even further—he went so far as to say loving God and your neighbor as yourself summed up the Torah in its entirety (Mark 12:28—34). He recognized that his nation was far from God and he wanted them to re-embrace Torah, but he had a different approach.

This emphasis on reflecting God’s love to others is much more at the center of our celebration of Hanukkah.

Yeshua emphasized and demonstrated that showing mercy and kindness to others was the priority reflected in God’s instruction. Many of his contemporaries and subsequent Jewish sages agreed (for example, the Talmud interprets Leviticus 18:5: “Keep my decrees and laws, for the person who obeys them will live by them. I am the Lord,” as meaning we should live by the law, not die by it [Yoma 85b], thus prioritizing the preservation of life6). The Torah is a gift and a tool, yet when we allow our interpretation of it to prevent us from reflecting God’s own heart, we miss its purpose.

Yeshua encouraged a higher ethical standard than just obeying the letter of the law. It seems to me that this emphasis on reflecting God’s love to others is much more at the center of our celebration of Hanukkah in our current time—much more so, obviously, than the theme of the violent enforcement of Torah in the Maccabees’ story.

Should I celebrate Hanukkah?

Many holiday celebrations have complicated back stories. The story of Thanksgiving in the United States is a prime example. But I think it’s possible—and a very positive thing—to celebrate the holiday with a full view of its history. For instance, this year, my family and I (which due to my recent marriage now includes Mayflower descendants) will discuss our history, how far we’ve come as a nation (as well as the ways we need to improve), and serve indigenous food to honor the nations that were here before us.

I’ll approach Hanukkah the same way—I will not shy away from the hard and important conversations the holiday stirs up. I can appreciate the Maccabees’ zeal for Torah, but not condone the way they defended it. After all, Hanukkah was never really about them. It wasn’t Mattathias and his sons who worked the miracle of oil—it was God interceding and allowing worship to be restored in His Temple, having compassion for His people, and restoring us to our land and our faith. I’ll gather with my family, I’ll smile proudly as our nieces and nephews take turns lighting the candles each night, and I’ll spin the dreidel and cherish the privilege it is to learn Torah freely without fear of tyrants. I’ll recount the story of Yehudit, an underrated heroine who acted in defense of her village and might have even inspired the recipe for my great-grandma’s latkes.7 But most of all, I want to be sure that I’m living out the heart of the Jewish faith—aspiring to a higher calling rather than only fulfilling the letter of the law. I want to be zealous when it comes to loving my neighbor and illuminating the world with the light of the God I claim to love above all else. After all, that is our calling as Jewish people: to be a light to the nations. Let’s shine brightly.

7. Sarah Zielinski, [capitalization is the source’s] “A Hidden Hanukkah Tale Of A Woman, An Army And Some Killer Cheese,” The Salt, NPR, December 4, 2012.