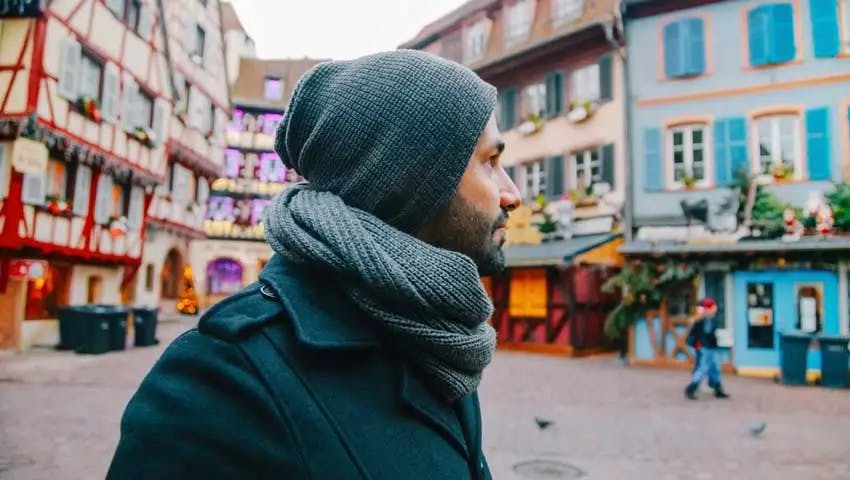 I had always assumed that the phrase “Jews don’t celebrate Christmas” was universally accepted. For my Jewish father growing up in Detroit, celebrating it wasn’t even an option. And neither my grandparents nor others in their Jewish community celebrated Christmas. They weren’t particularly religious, though my dad and his brother went to Hebrew school, had their bar mitzvahs, shopped at all the Jewish stores, and cooked Jewish foods. My grandmother was a fantastic cook, and we always enjoyed her cooking. My dad once told me the story of when he was visiting his grandmother (my great-grandmother, whom I barely knew) and was eating a sandwich on a kosher-for-Passover plate. When she realized the plate he had, she took the plate and threw it in the garbage can. She was evidently more religious. They didn’t keep kosher or Shabbat, and Christmas was not for them. It was only after my father married my mother, a Catholic woman, that Christmas was something he encountered. It wasn’t something they did full force, but they did have trees some years and presents. My grandparents would send us Christmas cards and even presents, as they knew it was a way to show us love. They were never offended by it, but they were Jewish and that wasn’t something Jews did in their community… or at least that was what I was told.

I thought we were different.

So when my Jewish/non-Jewish family lit candles during Hanukkah and exchanged presents for Christmas, I thought we were “different.”

When the 2013 Pew survey revealed that 4 percent of American Orthodox Jews reported having a Christmas tree, I was shocked! What’s more, the study indicated that one-third of all American Jews claim to have a Christmas tree, as well.1 I began to wonder if the Jewish relationship with Christmas was more complicated than I had realized.

To be fair, while Christmas isn’t considered a Jewish holiday, Jewish people have played a key role in shaping the American experience of the holiday. Some of the most popular Christmas songs, films, and books can be credited to Jewish people. We wouldn’t be “rockin’ around the Christmas tree” or have “chestnuts roasting on an open fire” were it not for Jewish songwriters. Even the idea of that idyllic “white Christmas” was invented by none other than composer Israel Beilin, better known as Irving Berlin.

I’ve seen the connections in my own life: the first time I met my friend Matt, a Jewish lawyer from New York, he told me that Christmas had always been his favorite time of year. He had always loved the holiday atmosphere in the city and found Christmas music especially meaningful.

As I’ve come to realize, his experience wasn’t unique. During the holiday season, social media is filled with die-hard Jewish fans of Christmas carols, trees, and presents.2

My own family immigrated to Israel when I was a teenager, and I figured Christmas was no longer going to be part of our family’s traditions. While living in Jerusalem, I met Israelis from vastly different backgrounds: my Moroccan, Arabic-speaking friends; my Yemenite girlfriend; my Russian-speaking army buddies; my British neighbors. And I was a stone’s throw from one of the largest ultra-Orthodox, Yiddish-speaking neighborhoods in the world.

I quickly discovered that there wasn’t one Jewish way to live.

I quickly discovered that there wasn’t one Jewish way to live. For instance, my Israeli friends didn’t consider brisket and bagels to be “Jewish foods,” even though in the States, those items are a Jewish cultural staple. Israelis are known for coming from an array of different traditions, and I was surprised to find that many were interested in Christmas. One year, my family decided to host a Christmas dinner. Our Israeli friends loved it!

As an adult, I married and relocated to England. Like myself, my wife comes from a Jewish/non-Jewish ancestry and grew up in Bethnal Green, London. When I first moved there, I found that the vast majority of Jewish people that I met had no issue with Christmas and felt it was a warm and festive time of year. Christmas dinners, decorated trees, and presents were not uncommon practices among Jewish Londoners, even for Orthodox Jews. In fact, one of the main kosher butchers claims to sell over two thousand kosher turkeys leading up to Christmas Day! There’s even a Jewish replacement for the traditional Christmas pudding: a kosher “seasonal pudding.”3

Having lived in New York, San Francisco, Jerusalem, and London, I am familiar with the Jewish-Christmas tensions each December, and I’ve concluded that there is not a one-size-fits-all Jewish approach to Christmas.

I find this time of year to be a wonderful opportunity to reconnect with friends and family, Jewish or not. Personally, as a Jewish believer in Yeshua, I enjoy reading the rich account from the Gospel of Luke with my family about a Jewish baby born so long ago.4

Christmas may have something to offer Jewish people.

Don’t get me wrong, I completely understand Jewish wariness toward Christmas in light of the history of Christianity. Personally, the commercial aspects of the holiday don’t appeal to me, and I still don’t feel a need to have a tree in my house. But after experiencing Christmas as a Jew on three different continents, I’ve come to believe that Christmas may have something to offer Jewish people.

I mean, if the Jewish people are responsible for all the best elements of Christmas, we might as well celebrate and enjoy them!

1.A Portrait of Jewish Americans.

2.Meet the Jews Who Love Christmas.

5.Have Yourself an Unorthodox Little Christmas.