Are You Jewish Enough to Live in Israel?

The effects of gatekeeping the promised land. 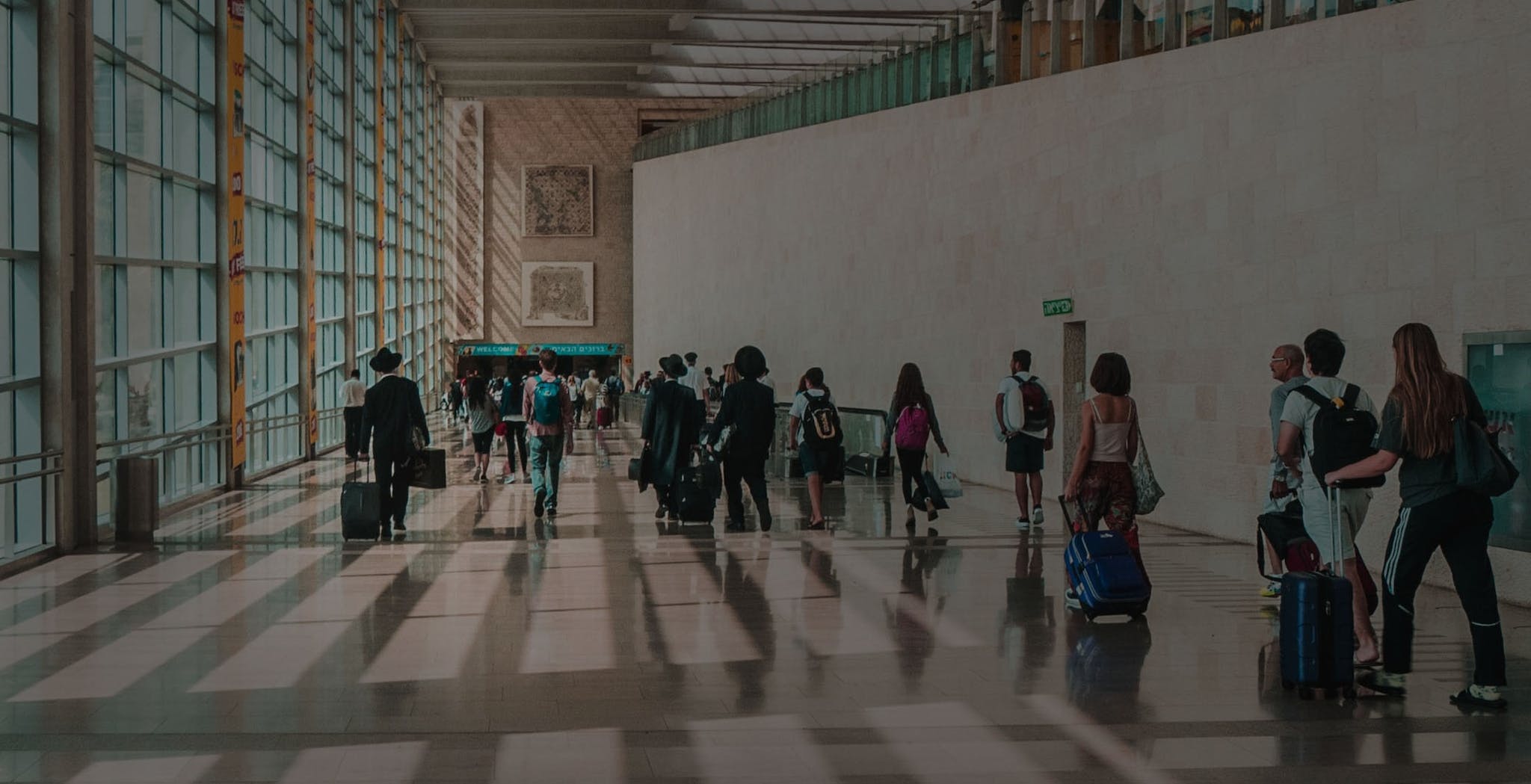 When my alarm hits at 7 a.m., I too often roll over, pick up my cell phone, and immediately start checking my feed, looking at the latest headlines, scrolling through social media, and trying to figure out the day’s Wordle in less than three guesses. Maybe you can relate. And while I love to see messages from friends, photos of family, and hilarious TikTok videos, too often, I’m overwhelmed by a deluge of news about war, sickness, a rising cost of living, and a lot of very angry people.

It’s hard not to start my days with a low-level hum of anxiety as I try to tuck any existential dread into a dark and hidden corner in the back of my mind—somewhere near my irrational fear of a zombie apocalypse and my suspicion that we’re all living in The Truman Show. I stand up to go make the morning coffee and hug my kids, and I’m left with the thought, Is there any place, any home, any world that is safe for me and my family?

Why Israel Attracts So Many Jewish People

I don’t think I’m alone in that feeling. Most of us are overwhelmed by the onslaught and are searching for all the things that “home” represents: peace, belonging, and safety. Like many Jewish people over the centuries (and perhaps a few Matrix fans), I used to dream of Zion as the perfect home. In a 2020 survey of American Jews, 82% said that caring about Israel is either “essential” or “important” to what being Jewish means to them.1 Programs like Birthright encourage such a posture, inspiring Jews from around the world to care about, to visit, and even to permanently relocate to Israel.

I’ve seen many of the nation’s imperfections. But I’ve also seen an unmatched beauty.

After making aliyah and living here for the last 17 years, I’ve seen many of the nation’s imperfections. It is run by imperfect people, after all. But I’ve also seen an unmatched beauty. I completely understand why, last year alone, nearly 38,000 Jewish people opted to leave their old lives behind in order to create new ones here.2

For some, immigration to Israel is an act of self-preservation. Last year, perhaps due to the rise of antisemitism in the West, Israel saw 4,000 new immigrants from the US (the highest number since 1973) and 3,500 from France (which was a 40 percent increase from the year before). Since February 2022, over 30,000 Ukrainian refugees have entered Israel, and over a third of them have either made aliyah or are in the process of doing so. Some might argue that Israel is the lone place of refuge for a minority that has been persecuted in nearly every other country in the world. No other country in the world maintains Judaism as the ethnic majority—and there’s something inherently comforting about being surrounded by people who are like you.

It can also be a draw to those seeking jobs in innovative fields. Israel is one of the most technologically advanced countries in the world—we ranked third in the world for tech ecosystem in 2021.3 We invented the cell phone, USB drive, FaceID, and a breathalyzer that can smell cancer.4 5 6 7 Even the healthcare system is renowned: in 2021, Israel was ranked sixth in the World Index of Healthcare Innovation.8 It impresses me even more when I remember that all of this comes from a desert country the size of New Jersey.

But for others, these benefits have nothing to do with the choice to make aliyah. Many Jewish people feel it’s a fulfillment of their longing to return to the home of our forefathers after thousands of years in exile. According to the Sifre, the mitzvah of living in the land of Israel is as important as all other commandments put together.9 Ultimately, whether or not a Jewish person calls it home, Israel is ingrained in our identity.

The Legalization of the Promise

In 1950, less than 10 years after the senseless slaughter of six million of our people in Europe, the Knesset unanimously passed the Law of Return. It declares: “Every Jew has the right to come to this country as an oleh.”10 As then Prime Minister David Ben Gurion so aptly put it, “This law does not provide for the State to bestow the right to settle upon the Jew living abroad; it affirms that this right is inherent in him from the very fact of being a Jew.”11 Ben Gurion believed that the right preceded the country’s founding—it was firmly rooted in our history. The State wasn’t establishing anything new but was formally legalizing a long-standing tie between the Jewish people and our homeland.

Four thousand years earlier, as recorded in Genesis, God spoke to our forefather and said, “Go from your country, your people and your father’s household to the land I will show you. I will make you into a great nation, and I will bless you; I will make your name great, and you will be a blessing. I will bless those who bless you, and whoever curses you I will curse; and all peoples on earth will be blessed through you” (12:1–3). When Abraham and his family arrived at the land of Canaan, the Lord promised him: “To your offspring I will give this land” (12:7).

Our calling from God hasn’t changed, but the landscape of our people has certainly become more diverse.

God chose us and gave us this land in the same breath. He set us apart, blessed us, and promised us a home. That’s why we call it the Promised Land (though I would add: such a promise should never be used to treat non-Jews who live In Israel differently). Our calling from God hasn’t changed, but the landscape of our people has certainly become more diverse—we live around the globe, we’ve intermarried, and we hold varying levels of religious observance. Since its inception, the Law of Return has expanded accordingly to include those with more distant Jewish ancestry. But is the process really serving the global Jewish population well?

The Limitations of the Process

In November of 1935, the Nazi party passed the Nürnberg Laws, which recognized someone as Jewish if they had one Jewish grandparent. Ironically, the modern State of Israel applies the same criteria in determining who gets to make aliyah. Yet it makes sense in a way—if you are Jewish enough to die in a gas chamber, then you are Jewish enough to become Israeli.

Still, to prove it, one needs to jump through some hoops. According to the Jewish Agency, which now helps in processing all of the applications (often in collaboration with Nefesh B’Nefesh), some of the specific documents you’ll need are your birth certificate, one or more of your parents’ birth certificates (depending on where in your genealogy you find your family’s Jewish roots), a “clean” background check from your home country, and a letter from a rabbi of a reputable synagogue that attests to the knowledge of one’s Jewish background.12 Such items may be simple enough for you to gather, but actually obtaining citizenship is another story.

The same Law of Return that promotes Jewish immigration to Israel also empowers the Ministry of Interior to deny citizenship to those deemed unworthy. This includes those who have committed a serious crime such as murder, have a contagious disease, or have engaged in antisemitic activity. Some of the most famous cases for denial of aliyah have been for a former Soviet spy trying to escape imprisonment, an American mobster, and an activist with involvement in a series of bombings. No big loss there.

All applicants for aliyah are ‘guilty until proven innocent.’

Denying such people makes sense—it’s to protect the safety of the other Israeli citizens. However, the Jewish Agency has grown in power over the years and has been skeptically scrutinizing every person attempting to apply for citizenship. All applicants for aliyah are “guilty until proven innocent.” Some of the cases I’ve witnessed are just heart-wrenching. They make me sit back and wonder, How did we get here? How has a safe haven for the Jewish people become a place where many of our own people experience the devastating effects of gatekeeping, where our own people’s identity is called into question, and where some again are forced to wander before entering the Promised Land?

Earlier this year, I heard of an Orthodox businessman who has lived and worked in Dubai over the last few years. He had impeccable credentials and lived a Torah-observant lifestyle, but he was denied. Why? The Jewish Agency hinted at their suspicion that he may have converted to Islam while in the UAE and claimed there was no way of disproving their concern. He was so hurt and offended by the rejection that he returned to his home country without even challenging the baffling decision in court.

Renate Kauffman, a German-Jewish woman who survived the Holocaust as a child, was denied citizenship a few years ago because of her faith in Yeshua as the Jewish Messiah. Even though she had fought for her own survival and lost most of her family in the concentration camps, Renate was forced to fight again—she hired a civil rights lawyer and raised thousands of dollars in order to appeal the decision. Only then was she finally able to receive her identity card.

Some Jewish men and women are simply left in limbo. They submit their aliyah application and are never accepted or rejected. They have no right to an appeal because a decision was never officially made. If they choose to stay in the country, they have no right to work or receive healthcare or social security. They are forced to live as outlaws or eventually lose hope in their dream altogether. I can’t imagine that this is what God had in mind when He set us apart, made us a nation, and promised us this land.

The intentions are good: Israel is trying to protect itself and its people. It’s scary enough to live through wars and terrorist attacks—we certainly don’t need Soviet spies or mafiosos added to our population. But if these protective efforts end up jeopardizing the safe return of many Jewish people, the Law of Return isn’t really fulfilling its purpose. If you’re Jewish enough to be yelled at, spat on, made fun of, beaten, or even killed, you should be Jewish enough to return to your homeland.

God didn’t promise the land to a certain kind of Jewish people.

In seeing and hearing the stories of Jewish men and women who have been denied citizenship, I think we’ve not only strayed from the original intent of the Law of Return, but from the very heart of God’s promise to our people, as well. He didn’t promise the land to a certain kind of Jewish people—He gave it to all of Abraham’s descendants. What’s more, the prophets unite around the common message of our return home: “For the time is coming when I will restore the fortunes of my people of Israel and Judah. I will bring them home to this land that I gave to their ancestors, and they will possess it again” (Jeremiah 30:3).

There is still work to be done to move us towards this future—not only in our gathering to the land, but in our unification as a people. Living in Israel certainly won’t instantly fix our problems (and as you now know, it doesn’t ease my own morning existential dread). But remembering God’s promise to us—for this land and for our identity as His people—can unite us, give us hope, and remind us of our future to come.

4. Christopher McFadden, “11 Israeli Inventions that Have Changed The World for The Better,” Interesting Engineering, accessed August 3, 2022.

The Israeli-Palestinian Conflict: The Truth the Media Misses

What’s It Really like to Be a Messianic Jew?